I keep mentioning this software Drafts 4 and often it’s entirely unconscious, more a consequence of how I write so much in it than through any deliberate plan to sell it to you. But I got the chance to expand on exactly why I like it so much when MacNN made it the topic of a Living With column. These are pieces about what something is like after a lot of use, after a long time. It’s interesting because most technology pieces are about today’s new releases and there is only so much you can possibly learn in a short review.

Whereas with a long process of reflection like this, there’s time to have discovered:

It is just a place to write. More than a text editor, less than a word processor, I have been opening it up to write down the odd stray thought for a couple of years. I’ve been opening it up to write the minutes of a meeting. To write a short story. To prepare a script for a presentation. If my brain isn’t somehow befuddled into believing I must open some other writing tool, I automatically open Drafts.

If that were all I did — open, write, rinse, repeat — then I’d be more than happy. I cannot, cannot define or explain this, but there is something pleasurable about writing in Drafts, about the physical typing of words into it, that I don’t get in Word or Pages.

It isn’t all I do in Drafts 4. Read the full piece for more detail, more explanation and even more enthusing.

Half of the fun of this is how old it is – it was first aired 22 years ago – but it’s also a bit of a historical document about how our favourite tool began.

Originally, Microsoft refused to put Word on the iPhone or iPad and trusted that its millions of users would go oh, okay then, we won’t buy an iPad. It didn’t work out quite like that and a fair short summary is that Microsoft shot itself in the foot many, many times.

For once people bought iPads and were therefore required to use alternatives to Word, they discovered there are alternatives to Word. Suddenly all of Word’s brilliance gets forgotten and all of its outrageously irritating problems get remembered as we go discover we can get more done without it. In truth we actually can’t: Word is the most powerful word processor there is but with great power comes stupid problems so something which technically does less is much more useful because we can use it more. If you can get your writing done without Word changing the formatting on you, without Word simply crashing just because you dragged in a picture like it said you could, then you get more writing done.

Shunning the iPad was Microsoft doing its once typical and once extremely successful technique of pitching its bulk against a competitor but this time the competitor won and the blowback damage to Microsoft was huge. Word ceased to be ubiquitous. People stopped buying Word just because it was Word. Not just people who were buying iPads but people who were buying word processors for any machines. Including Windows PCs.

Good. We are now back in a world where you have many choices for how you write your words and if choice can be overrated, it’s better than when we just had the one.

But last year Microsoft finally brought Word to iOS and I wrote about how surprisingly good it was, particularly on the iPhone. I’ve changed my mind a bit since then: I hardly touch it on my iPhone but I do keep Word on my iPad and I use it from time to time. It’s been steadily improved too, plus the original slightly messy business of how you could read but not write in it unless you paid some money is gone. You can now use Word without a subscription and it’s worth keeping.

I don’t find myself moving over to it for everything, even though I’d like to find one single application I could use everywhere. As it is, I’ll write on Drafts 4 for iOS, or Pages for iOS and OS X, on Evernote everywhere, Simplenote in many places and occasionally Word. I feel slightly schizophrenic which is fine, but I also find my writing is all over the place. I’ve a hundred or more pieces in TextEdit. A dozen in OmniOutliner. It can take me a spell to find what I’m sure I wrote the other day.

So I can appreciate what this fella Andrew Cunningham says in Ars Technica. The short summary is that he’s now turned. It took the new beta version of Word for Mac to tip him over, but having the one word processor on OS X, iOS, Windows and Android has snared him:

So yes, Microsoft didn’t make it to the iPad or to any of these other platforms as quickly as it could have or should have. There will be people, including some at Ars, who found other non-Microsoft solutions that worked for them in the meantime. But I find myself revising my initial “too little too late” stance to something closer to “better late than never.” A subtle distinction, maybe, but an important one.

You win, Microsoft: How I accidentally went back to Microsoft Word – Andrew Cunningham, Ars Technica (20 June 2015)

I say this is sort-of a good deal because I learnt of the price drop, remembered how enthusiastically people had recommended this app to me and I bought it on the spot. And it was only as I tried writing in it that I looked through the controls and found a line saying “Buy the Pro version”.

The Pro version is only £2.99 but you just know that all the enthusiasts were enthusing about that edition so the one I’ve got isn’t the one they meant. It’s only 69p but I was on the fence about trying to take on another word processor so I find I’m unwilling to go plop down £2.99 until I know what the differences are.

But whether you look at the 69p one or the Pro £2.99, go take a look in the App Store. You can’t believe how much praise I’ve heard for iA Writer.

The sale includes both the Mac and Windows editions: for Mac you need OS X version 10.7 or later – that’s better known as OS X Lion – and for Windows you need XP or later.

Final Draft doesn’t exactly stretch your computer: it’s funny how old-fashioned the software looks. I have version 8 and don’t really use it enough now to warrant going to 9 nor can I really see much of a difference in the upgrade: there isn’t a killer must-have feature.

But it’s a solid script-writing word processor and if it has more and better competitors today, it is still true that Final Draft is the nearest thing to an industry standard.

If you are an existing user, by the way, you can upgrade to version 9 for $99.99 on the same official site’s store.

This one is important. Nisus Writer is the strangely still little-known and unfortunately a bit little-used word processor for Macs. While every other Mac word processor died in battle against Microsoft Word, this one mostly carried on. It was wounded, it may have had some time in a coma, but it survived and in recent years has been bounding back.

But Nisus is special to me because of its history and specifically of how it was the first to introduce features we now depend on. The one that jumped into my head was non-contiguous selection. Cor. That’s a teeshirt phrase. But it means being able to highlight that sentence over there, then that sentence down here, and copying them at the same time. It’s not just a time saver for copying out bits of text you need, it’s a boon at the other end to. When you hit Paste, it all goes there in one go.

I remember using it for repurposing copy from somewhere. Can’t quite recall. Maybe something like a bio where I knew these three or four bits would help in whatever pitch I was doing. Copied those out, pasted them into one new bio and I could’ve just sent the lot off like that but equally I could take some of this reclaimed time and spend it crafting the bits into one good, persuasive whole.

Thanks for reading my reminiscing, now go take a look at the deal. This is a MacUpdate deal, nothing to do with me, and for an extremely limited time it’s got Nisus Writer Pro for 50% off. So that’s $39.50 instead of $79.

I think $79 is a bargain anyway. But don’t be like the colleague of mine who decided to buy Final Draft 9 one day after it was on a half-price sale.

Hemingway was an online-only app for word processing which would let you type away and then wince at you. Give a sharp intake of breath at you. And mark up your text thisaway: 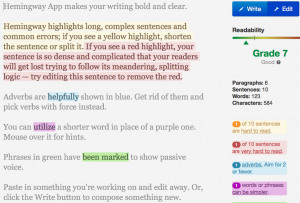 I have never used it and wouldn’t rush to write anything online, said William typing this directly into a WordPress page on Safari. Hmm. That changes my mind. I have actually just changed my own mind.

Now, however, Hemingway brings all its vicious accusations to the desktop: you can buy Hemingway for PC or Mac at $4.99 each from the official site.