I say this is sort-of a good deal because I learnt of the price drop, remembered how enthusiastically people had recommended this app to me and I bought it on the spot. And it was only as I tried writing in it that I looked through the controls and found a line saying “Buy the Pro version”.

The Pro version is only £2.99 but you just know that all the enthusiasts were enthusing about that edition so the one I’ve got isn’t the one they meant. It’s only 69p but I was on the fence about trying to take on another word processor so I find I’m unwilling to go plop down £2.99 until I know what the differences are.

But whether you look at the 69p one or the Pro £2.99, go take a look in the App Store. You can’t believe how much praise I’ve heard for iA Writer. 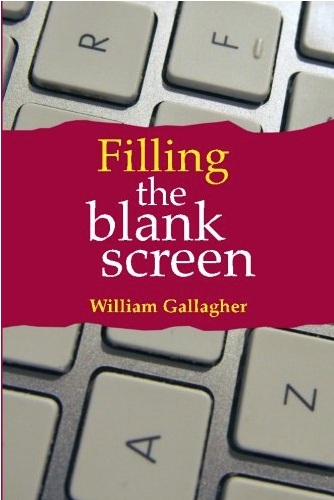 BBC writer William Gallagher follows up his hit productivity book The Blank Screen with more informative, sparky and witty chapters about being creative and getting your writing done. Over 100 of the best, most talked about and most useful articles from The Blank Screen news site have been compiled, edited, updated and given a scrub. Learn about how writers and even normal people can get started on the writing they keep putting off. See how to get over problems and to that finish line – and about how about the only thing more useful to you than that expensive computer you’ve got is that expensive smartphone.

“Filling in the Blank Screen is a helpful read and has a lot of wisdom for us aspiring wordsmiths. It was a clever and witty read. You’ve got a great way of making it sound like a conversation with the reader. Very natural prose.” – George Bastow on Twitter September 7, 2014

Get it on Amazon now.

This one is important. Nisus Writer is the strangely still little-known and unfortunately a bit little-used word processor for Macs. While every other Mac word processor died in battle against Microsoft Word, this one mostly carried on. It was wounded, it may have had some time in a coma, but it survived and in recent years has been bounding back.

But Nisus is special to me because of its history and specifically of how it was the first to introduce features we now depend on. The one that jumped into my head was non-contiguous selection. Cor. That’s a teeshirt phrase. But it means being able to highlight that sentence over there, then that sentence down here, and copying them at the same time. It’s not just a time saver for copying out bits of text you need, it’s a boon at the other end to. When you hit Paste, it all goes there in one go.

I remember using it for repurposing copy from somewhere. Can’t quite recall. Maybe something like a bio where I knew these three or four bits would help in whatever pitch I was doing. Copied those out, pasted them into one new bio and I could’ve just sent the lot off like that but equally I could take some of this reclaimed time and spend it crafting the bits into one good, persuasive whole.

Thanks for reading my reminiscing, now go take a look at the deal. This is a MacUpdate deal, nothing to do with me, and for an extremely limited time it’s got Nisus Writer Pro for 50% off. So that’s $39.50 instead of $79.

I think $79 is a bargain anyway. But don’t be like the colleague of mine who decided to buy Final Draft 9 one day after it was on a half-price sale.

As featured in this week’s email newsletter, you can currently get a free six months subscription to the premium version of Todoist.

The deal is via Appsumo, it’s here and it’s worth looking at – but before you buy, check out the free version. It may well be all you need in which case Premium is a waste of your money. It’s a nice waste, mind: you’d be supporting the firm that makes this To Do app you so like, but still.

When you follow that Appsumo link, scroll down. The front page looks like a big ad for Appsumo but it’s just the top: scroll down for a lot of detail about Todoist.

Very briefly. Appsumo is offering a discount on this budgeting application, You Need a Budget, for Mac and PC which comes so highly recommended that I’ve just bought it.

Go take a look now: you can guess what a budgeting application does but there’s a video showing why this is a good one.

There’s a bunch of productivity apps that have just had price reductions. As ever, the price of these is rarely all that much so if you miss a sale, shrug and buy at the full price anyway. But if you’ve been havering over any of them or you just want to try a category of app out, this is a good time.

From all the ones I can see, this is what I’d pick out for you. Click on the titles to go take a look.

MindNode
Mind-mapping software that plays very nicely with outliners and To Do lists such as OmniOutliner and OmniFocus. It’s now £2.99 UK or $4.99 US instead of £6.99 UK or $9.99 US

Appigo ToDo
This was the app I lived in before discovering OmniFocus. There’s a huge amount to love in it and I did deeply love it, I’ve just found OmniFocus is a far better fit for me. Since I moved on, Appigo has released a range of versions and I get a bit confused – some have Cloud syncing, some are for older devices – so read the release notes before you buy. But this one is now £1.29 UK or $1.99 US instead of £2.49 UK and $4.99 US

iDatabase
Never used it. Never heard of it. But it went on sale today and I’ve already told three people it looks worth a go – and they’ve all bought it. One has bought and is sold: it’s just what she needed. Now 69p UK, 99c US instead of £1.49 UK or

Very important: this is for the iPhone version of iDatabase and you’ll benefit from having the Mac version too – and that’s on sale as well. It’s an even bigger sale: iDatabase for Mac is now £1.99 UK instead of £13.99 UK ($2.99 US instead of $19.99 US) and the second I found that out while looking up the price for you, I bought it myself.

Launch Centre Pro and Launch Center Pro for iPad
Use this to set up one button that, say, rings your mother. Instead of tapping on the phone icon on your iPhone, then contacts, then scrolling to your mother’s name and finally tapping on whether you want to ring her mobile or her landline, you just tap once and your iPhone does the rest. Maybe that would be handy enough for you but LCP can get really powerful – also, disclaimer, I found it a bit confusing – and it can do all sorts of things for you. Ridiculously detailed things.

I recommend you take a look but, confession, I keep popping it back onto my iPhone home screen and taking it off again. The biggest use I had for it was rapidly adding a new task to OmniFocus and it was faster than going through OmniFocus itself and tapping on Add Task. But now OmniFocus 2 for iPhone is so quick, I just don’t find the benefit.

Take a potter around the App Store’s productivity category for more, but these are the best ones.

Specifically, negotiate like you’re the FBI and the person you’re dealing with is currently holding hostages. They have your attention. You have theirs. You both have guns.

Eric Barker of Barking Up the Wrong Tree has taken the FBI’s Behaviour Change Stairway – a diagram of their standard approach – and applied it to the freelance life like so:

The Behavioral Change Stairway Model was developed by the FBI’s hostage negotiation unit, and it shows the 5 steps to getting someone else to see your point of view and change what they’re doing. It’s not something that only works with barricaded criminals wielding assault rifles — it applies to most any form of disagreement.

You’re wondering how he can say there are five steps when his article claims there are six. You are right. The five he lists there are FBI-based ones and the six are similar but extrapolated steps that make this fit the kind of situations we are hopefully more likely to encounter.

He’s boiled down the FBI’s distillation into these five or six steps but probably the first one is the key thing to focus on:

1. Ask open-ended questions
You don’t want yes/no answers, you want them to open up.

A good open-ended question would be “Sounds like a tough deal. Tell me how it all happened.” It is non-judgmental, shows interest, and is likely to lead to more information about the man’s situation. A poor response would be “Do you have a gun? What kind? How many bullets do you have?” because it forces the man into one-word answers, gives the impression that the negotiator is more interested in the gun than the man, and communicates a sense of urgency that will build rather than defuse tension.

But then you’ve got five more steps before they put the gun down and/or you get what you want. It’s quite a fascinating read, especially if you’ve seen eleventy-billion cop shows with exactly this kind of scenario.