This week’s updates to the iOS versions of Reeder have been followed by the first full release of Reeder 2 for Mac. It’s now out of beta and available to buy from the Mac App Store for £2.99 UK, $4.99 US.

It’s an RSS reader: it brings you all the news from any number of websites who have these RSS feeds and that you chuck into Reeder. There are many such services and if they’ve stuck around for any length of time at all, they each have their fans. I’m sufficiently a fan of Reeder, though, that when it was pulled from the App Store last year because Google changes stopped it working, I stopped reading RSS.

Only on my Mac. I couldn’t stop reading it on iOS and I’m not sure now what the chain of events was. I think Reeder lasted longer on iOS but anyway, the iPhone one was updated last September and I so very clearly remember the delight at that coming out while I was on holiday. Learnt about it, bought it, had a really good time getting reacquainted with an old friend in a new design.

Similarly, the iPad version is a pretty constant friend.

But I did miss reading news on my Mac, most especially on those days when I’m here for twelve or fifteen hours. Maybe I should go take screen breaks, but I just used to really enjoy spending a few moments downtime catching up with news. Today, after so very many months without Reeder being available on the Mac, it is again and I’m enjoying it again.

Here’s me enjoying it. 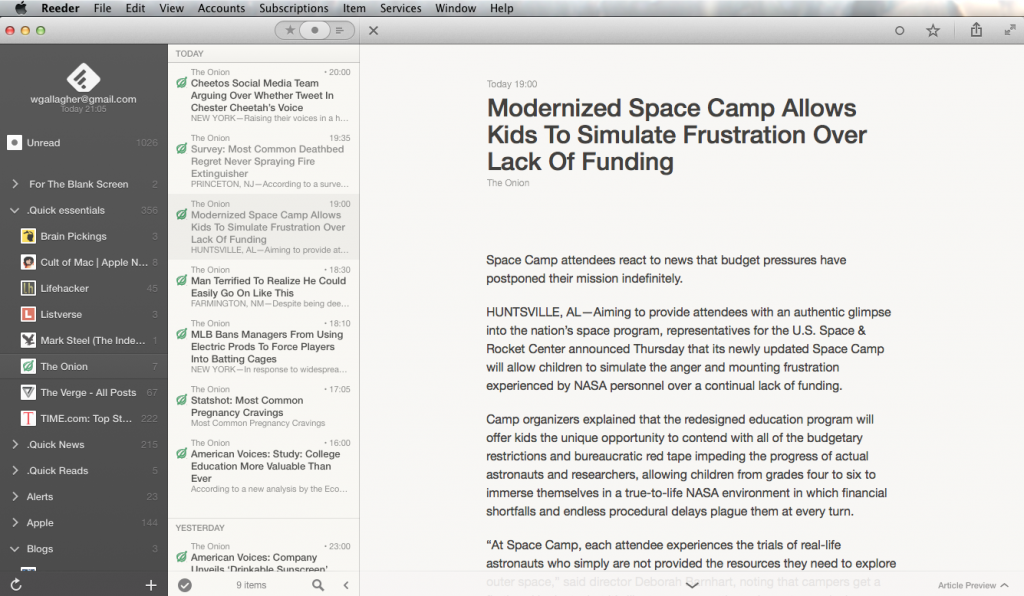 If you already have 1Password then the odds are that your iPhone has updated it for you. Just as it did to me, exactly as I opened the old one to take a screengrab so that you could see the difference.

“Oh,” I said as the icon changed under my finger. “Well.”

So I can't show you what it used to look like, you just need to trust me that it looks very nice now. It was fine before, I liked it before, but I like it better now. And if your phone hasn't done the update or you don't yet have 1Password, I could copy-and-paste Agile Bits' description of their changes. But I'd rather just highlight one apparently trivial one. More than apparently trivial, it is definitely trivial and yet:

For those upgrading from 1Password 3 for iOS, the import process is much improved.

My lights, it was bad before. You had to open 1Password 3, then open 1Password 4 and the later version would magically figure out you were updating. It would set you up, easy. No bother. Except it wasn't easy and it was all bother and it didn't figure out anything. I felt like an alchemist going through that upgrade and maybe it was satisfying when everything suddenly worked, but I'd rather have been satisfied an hour or two sooner.

Then even knowing what I had worked out, it took more hours to get my wife Angela Gallagher's 1Password 4 upgrade to work.

Once you're on, though, you're away. It is superb. This is the bit of the page that would get quoted in an internal Agile Bits report and quite right too: it really is superb. Once you get beyond the upgrade.

But you do, you will, and apparently it's easier now. Fingers crossed for whenever 1Password 5 comes out.

Go get the new 1Password for iOS for the first or the next time right here. And right now. 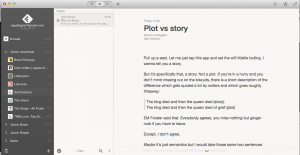 The short news for Reeder fans: download it right now from here.

The slightly longer news for anyone who isn’t a Reeder fan: it is terrific and you should download it right now from here.

Reeder is a news reading app, an RSS one where you tell it what websites you like and forever afterwards it gets news from all of those sites. Depending on the site, you can read the headline, the standfirst, an extract or the whole article and whichever you get, it looks gorgeous. One tap in the morning and I am reading news from BBC, New York Times, Lifehacker, The Onion and myriad more.

There are many RSS readers like Reeder but I don’t think there is another one that is really anything like Reeder. I’ve long loved its design – most of it, at least – and how well done its text was. Routinely, if I found an article on a site that was just too ugly to read, I’d either bung that piece into Pocket to read later or I’d subscribe to it in Reeder and read it there.

I still remember the instant when I learnt that Reeder for iOS was out. Last September, a new version was released partly to deal with how Google shut down its service that powered all RSS readers. It was a paid update and I paid instantaneously. That’s how much I liked the old one and now it’s how much I like the new.

Yet as good as Reeder is for RSS, I missed having it on my Mac too. That Google shutdown made the Mac one literally unusable and that is almost a year ago. Here’s how good Reeder is: I haven’t replaced it. Not on my Mac. I’ve tried others on iOS but as much as I used to use RSS on my Mac, I simply stopped reading any RSS there.

What’s been released is a beta version of Reeder 2 for Mac and the final version will be a paid-for app. I don’t know the price yet and I don’t truly care: I have read many thousands of articles through the various versions of Reeder and I open it practically as often as I do my email.

So go download it now from here and be ready to pay whatever the maker demands when it’s out of beta.