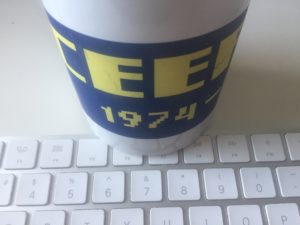 I don’t like what I wrote last week. I don’t really like what I wrote yesterday. And I’m coming to regret starting this. It’s just always been a fact of life for me: you do your very best and know that tomorrow you’ll be wincing at how poor a writer you are.

A friend has a regular habit of re-reading his scripts from, say, five or ten years ago, and having a good laugh at himself. I re-read mine and weep.

Only, I was just searching for something on my Mac and I found this.

020502.2235
THE LAST OF THE BLONDE BOMBSHELLS
UK Drama 2100-2235
Impossibly, this is the first repeat for this charming and uplifting Alan Plater drama from two years ago.

It’s long been out on DVD in the US but here, curiously, not so much, so this is a rare and welcome chance to see the reunion of a (nearly) all-girl band.

Judi Dench is a gem as the woman who sets out to find her disreputable pals and maybe recapture their glory days.

Don’t be shocked: they manage it. But the game is in traveling desperately as much as it is in arriving.

If you really know your television drama history then “from two years ago” is enough to pin this text down in time. If you’re not then let me offer you my congratulations and say the clue is in that string of numbers at the top. That’s the instruction to BBC Ceefax’s systems that the text should be removed at that date and time. It should go off air at 22:35 on 02/05/02.

And it’s not bad. You’re too young to remember Ceefax so let me explain that it would’ve been tricky to get one more letter, let alone one more word, into the page that text went on. That was the limit of a TV preview and actually of any writing on Ceefax at all. You could have multiple pages but readers would not necessarily see them in the right order so every page had to stand on its own.

So, given that it’s so very constrained in space, I read that text and think it does the job. Tells you what’s on, tells you some news about it and it gives you the plot as well as clearly being a recommendation.

Plus it’s got a bit of bounce to it.

That’s the element that gives me some pleasure. I also get some from the phrase ‘travelling desperately’ which I think works even if you don’t know it’s a quote from another Alan Plater drama. (Misterioso, if you’re wondering. My favourite.)

We think of online writing as transient and it’s true that all my Ceefax pages vanished the day after they were aired. Most of my writing is already long gone and usually not remembered but this morning a shard of it came back to poke me in the eye. Only because it was written on computers. I have a shelf of paper notebooks I used to use but I never look at them and I can’t read my own handwriting. Whereas a gallon of Ceefax writing just came back as if I’d typed it today.

I have no idea why I’ve still got this text on my Mac, especially as I didn’t get this machine until ten years after I wrote that. I am coming to see why my hard drive is so full, mind.

I think for once that I’m glad it’s there. I’m glad I can see that I wasn’t dreadful. The fact that I wrote around 16,000 pages of BBC Ceefax has come up quite often for some reason and now I think if they were all like that, I’m okay with it.

The gigantic majority were written in BBC Television Centre, typing directly into the systems there, so I don’t have even a significant fraction of the text on my Mac. But I have some from when I would be working at home and delivering copy: I think I’d send in a week’s worth of previews and reviews at a time. I feel sorry for the poor sod who then had to copy and paste them in, but I suppose I did that for other people too.

Ouch. I’ve just read a piece in the same document, a TV preview of some football thing.

What’re the odds? Arsenal meet Chelsea for a quiet, cosy kickabout with several million people roaring them on. That’s all this will be.

To make sure this appeals to everyone, the teams are London ones but filled with players from around the world.

Here’s an idea of how important this is: it starts at 1500. So the build-up is twice the length of the game.

I even made football jokes. Now I’m wondering if someone else wrote all of these. It would explain some things.