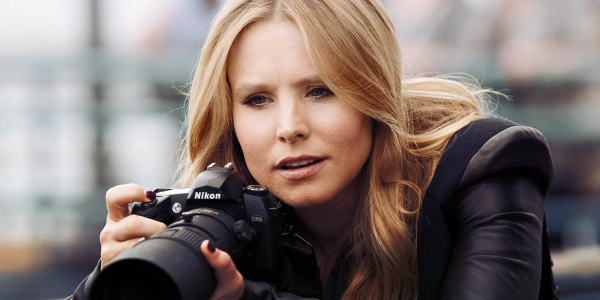 There is no chance I’ll get to write Veronica Mars but what makes me ecstatic is that today there is slightly less of no chance. Because the show is coming back.

So, true, it’s already written and presumably by series creator Rob Thomas. And true, I have absolutely zero chance of making my television drama writing debut – I don’t count Crossroads – on this show.

But there is a series. It was over, then it was a movie, then that was over, now it’s back. Stuff writing, I’m getting popcorn, I’m ready.

I don’t actually know when it’s coming and I do actually know that this news is old. It’s been a month or even two since the return of Veronica Mars was announced but I wouldn’t believe it at first. I needed an awful lot of evidence and here’s one of the last little bits: series star Kristen Bell talking about it:

I’m a writer but I’m also a journalist and normally if you give me two credible sources plus some documentary evidence, I’ll believe something is true. Unless you’re in government. This time I didn’t because it was just too important to me.

Five years ago I wrote a piece called I wish I’d written Veronica Mars and the title says it all. Except while I could’ve written that at any time during or since the show’s initial 2004-2007 run, I was writing it then because we’d had multiple sources and documentary evidence that a film version was coming.

This time I’m just going to take it for granted that I’ll like the new show this much. It stands a bit of a chance.

And that’s it, that’s all I wanted to exclaim about to you today. Except writing this, I’m conscious that I haven’t even said what Veronica Mars is. That’s not uncommon: if you try to describe the show it generally sounds so poor that you wonder how Rob Thomas managed to sell it. Veronica was a teenage detective and I want to write “but…” here, yet anything you say after that sounds like an apology or an excuse.

No excuses. No apologies. Veronica Mars is great.

Years ago, I remember someone insisting very seriously that The Bill was the greatest crime series ever made. And I remember telling her she should stay in more.

At the time I would’ve been thinking of Homicide: Life on the Street, Hill Street Blues, Between the Lines, I’d have run out of fingers and borrowed yours to continue listing more forever. Today I’d just show her Veronica Mars.