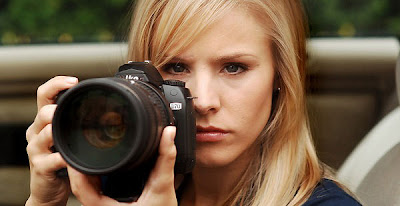 There. I’ve said it. I truly wish I’d written Veronica Mars. This glossy, sort-of teen drama, sort-of Nancy Drew and completely sort-of hardly known in the UK is a pinnacle of writing for me. I put writer/creator Rob Thomas right up there with the Aaron Sorkins of this world even though I’ve not seen anything else he’s done.

Is that a bit hyped, do you think? Little bit? Save yourself some time, skip me and just watch the show. It’s on Amazon UK here and I am ecstatic to see it’s finally on iTunes UK. I’ve just bought it again now on iTunes, partly to get the HD version, mostly because I can’t remember who I’ve loaned the DVD to. (It’s also on US iTunes and Amazon US.) Thank you for that: I only looked on iTunes for you and there it was. Wonderful.

So, anyway. I like this show. And you’ll have heard, not least because I will have bellowed it to you, that this week Rob Thomas launched a Kickstarter campaign to get funding for a Veronica Mars movie. I can’t imagine how scared he felt launching that: the campaign needed $2m. And I can’t imagine how he feels now that it has exceeded its target and done so faster than any other Kickstarter campaign ever. I spent Wednesday watching the total tick up: you have to suspect he was glued to it too. We could’ve held hands. I certainly crossed my fingers.

The first thing I did on Thursday morning was check the total. I’ve nothing to do with this show, I believe dramas get cancelled for a reason and I believe that it’s a mistake going back to old ideas, but still I checked that total sitting on the side of my bed at 5am.

Shows go through a certain cycle, I think. When they start, when you first tune in, you’re actively giving it a go, you are choosing it and you’re hoping it will be good. You give it a few minutes, maybe a whole episode in order to win you over but it’s like when you go see a standup comic: at the start, everyone in the audience is willing them to be good.

I do know someone who watched the entire run of The Wire hoping to get to like it. But usually, a show gets a few minutes, an episode, maybe an episode or two if there is enough in the first ones to at least get you to come back.

But if you do like the show, if it is good, something happens. If it’s good enough, if you like it enough, it stops having to convince you, it stops having to win you over. And it becomes your show. Doesn’t matter that you have zero to do with it. Your family starts saying things like “we can meet up after your programme”.

It’s nonsense, of course. It’s not your programme. It’s mine.

I’m not sure why I tried the first episode back in 2004: the sort-of teen drama idea didn’t appeal, the sort-of Nancy Drew didn’t grab me. But I tried the pilot and it was fun in an oddly bleak way. A couple of weeks later, I caught episode two and yeah, enjoyed that.

I then watched episodes 3 to 21 in less than a week.

There are actually 22 in the first run but that 21st was the very best penultimate episode I can remember seeing. And you know this: as the last episode of something has to do a lot of work resolving things, it’s common for the penultimate one to be the absolute screaming best. And for the actual last one to be a bit of a letdown.

It took me more than a month to get around to watching episode 22.

“Nancy Drew meets Philip Marlowe, and the result is pure nitro. Why is Veronica Mars so good? It bears little resemblance to life as I know it, but I can’t take my eyes off the damn thing.”

Listen to Joss Whedon too:

“Best. Show. Ever. Seriously, I’ve never gotten more wrapped up in a show I wasn’t making, and maybe even more than those. These guys know what they’re doing on a level that intimidates me. It’s the Harry Potter of shows.”

I was late to the show and all these quotes and all my watching happened after the first season had finished airing. So on the one hand I was able to watch the whole run in near-enough one go but on the other I was also immediately aware that the ratings had been wobbly and the show was in doubt.

I was on holiday at CentreParcs in Sherwood Forest that summer. Cycling around the place, having a great time, and twice a day stopping by the information centre to check the web for any news. (This was pre-iPhone. I know. Crazy.)  I can see where I was, exactly where I was, when I read online that it had been renewed for a second season. This is a show I have nothing to do with and yet its renewal made my holiday.

Something similar the next year: ratings, holiday, checking, phew. Veronica Mars got a third run.

Unfortunately something not quite similar enough the next year: ratings, holiday, check, damn.

Veronica Mars was cancelled and that truly upset me.

I write Doctor Who, I am a Doctor Who fan – actually, there’s a Veronica in one of my Who stories and she is named after Mars – and when that show got cancelled in 1989, I shrugged. That’s not a popular reaction amongst fans who see the cancellation as the BBC’s greatest mistake but I was – well, I won’t say I was glad because they might hear me, but the show had lost its way a long time before the axe. It was still the fans’ show but it was only the fans show: you had to be one to get anything from it. That’s a case where a show becoming your programme didn’t help it.

A similar thing happened with Star Trek: Enterprise: Google it now and you will discover that its last season was when it finally got good, when they finally got that show right. Bollocks. Only fans were tuning in so Enterprise gave up on the rest of us and we gave up on it. No one counters the fans because no one watched any more and besides, it’s just amazingly irritating hearing fans going on about their favourite shows. It reaches a point where you will never watch the series because they go on about it so much and they urge you so much to watch it, you’ll love it, give it a few episodes, a season or two…

Anyway, about Veronica Mars, my favourite show, you must watch it. Give it a few episodes. A season or three.

Veronica Mars was cancelled and people learnt to avoid me that day. People who’d never heard of this show learnt to leave me alone while I got over it. I wonder now if they thought Veronica was someone I knew.

Such as the card.

What might surprise you is that I’m not going to say what Veronica Mars is about. Well, it is a detective show and I do think that its setting is extraordinarily rich and compelling, but it becomes richer and it becomes ever more compelling as you get into it. And I want you to get into it.

You can’t come to the show cold any more. I’ve hyped it, Kickstarter fans are hyping it, the show is so praised now that I can’t imagine you being easily won over. Instead of coming to it like it’s a standup comic and you want it to be good, you’re inescapably going to come to Veronica Mars with a prove-it chip on your shoulder.

I worry about that. I worry that I’m going to take you off my Christmas card list if you don’t like it. But I also envy you. For years now, I’ve envied anyone coming to the show new: imagine having Veronica Mars ahead of you. You’re going to have such a good time.

And finally, I can imagine something like that too, I have some Veronica Mars ahead of me. Next year, I’ll be in that cinema watching a new story. Isn’t it simply joyous that a drama can get you like this? That the promise of a drama can be the best news I’ve had all week? I am ridiculously happy and excited and for ‘ridiculous’, just read ‘very’ or ‘tremendously’ or ‘damn right’.

You shouldn’t ever come back to old ideas, you shouldn’t revive something if it’s died. Unless it’s Veronica Mars. You never know, but I’ll lay odds that next year I’ll be wishing I’d written this movie.

One thought on “I wish I’d written Veronica Mars”