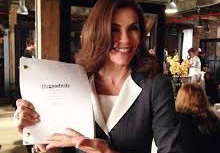 I’m running a workshop for children at the Bournville BookFest tomorrow and it will be my 510th public speaking gig since records began in late 2012.

I think a lot about that phrase, “since records began”. Usually it’s used to describe something incredibly serious like climate change or utterly trivial like, er, how Mars Bars have been shrinking since records began.

Was there one day when everybody thought we should be making records? Or did they start with the big stuff and add in the trivial to seem busy and keep their jobs?

I’d say that my 510 is pretty trivial, if not to me, except I can beat it with something else I appear to be counting which even I find daft. I’ve read thousands of scripts since records began but late last year I read a blog on Script Angel that recommended reading one a day. And I was persuaded.

Like most new year’s resolutions, though, I did fall off the wagon. Just not in the usual direction. If I’d stuck to reading one script per day then right now I should be on my 75th.

After we’ve spoken today, I’m going to get a mug of tea and read my 203rd.

I would like to share with you some lessons I’ve learned from 509 performances (remember, tomorrow’s is the 510th) and 202 scripts (remember, today’s is the 203rd).

But the only thing pressing on my mind is this small piece of advice. If you start watching a drama series on Netflix, finish it.

I got deeply into The Good Wife on Netflix about two years ago but for some reason stopped. Something came up. Work. I went away. I don’t know. But for some reason I didn’t rush back to the next episode and now I’m a little unclear how far through I got. I’m pretty sure I had this break in the show’s second season but it might be the third.

Either way, in my 202 scripts so far this year, 7 of them were from this show. To be specific, I’ve read the first 7 episodes of the series and each one has been superb. I’ll carry on reading – the entire first season’s scripts are online – but I really wanted to watch the filmed and broadcast version of one of them.

Netflix UK has taken the whole show off.

We live in a time when we have myriad choices of dramas to watch and it feels like everything that has ever existed is available on demand or even just on a whim, but it isn’t. And you know that Netflix’s decision is to do with rights, is to do with their license to broadcast it, but nobody outside those deals can predict what will be added and when it will be taken away.

At least, nobody’s figured out how to predict it. Since records began, anyway.