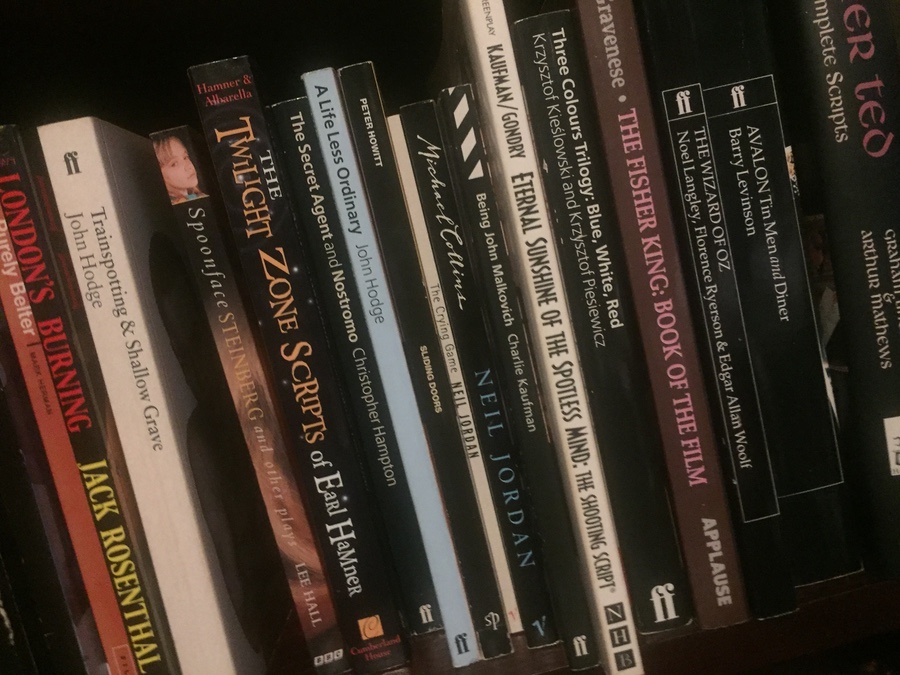 My overcrowded office shelves include one bookcase full of screenplay books and another couple of shelves of A4-printed ones. I used to collect them because I used to read them. A lot. I would read a script and make a note of whether I liked it: just a simple note to come back to reread this one some time or to avoid that writer forever. I remember that I read over a thousand before I stopped bothering to make those notes but of course I carried on reading.

Only, what used to be a habitual purchase has become a rare one because there are dramatically fewer scripts and screenplays published any more. That’s entirely because so very many more are released online. Not only is that cheaper and easier than buying bookcases full of the things, it also has unmatched advantage that the scripts look the way they should.

Books always alter them. At best it’s in order to cram more words on the page and therefore have fewer pages. At worst it’s not the script, it’s a transcript. Admittedly that one is a problem online too: there are people who will write down every word said in a film and call it the script. I can’t knock anyone being dedicated to words but some will do it as an unbroken stream of dialogue without any regard to even which character is saying which sentence. Madness.

Not entirely. I can think of 300 or 400 TV episodes I’ve read. And it’s always faster to read a screenplay than to see a film so when I was curious about Aaron Sorkin’s Steve Jobs movie but not quite curious enough to see it, I read that. Then for instance I liked the sound of (500) Days of Summer by Scott Neustadter and Michael H Weber so I read that.

Curiously, I later enjoyed the film (500) Days of Summer more than most people I know who didn’t read the script. And I enjoyed Sorkin’s Steve Jobs screenplay more than the film when it finally turned up on Netflix the other day.

Still, overall, the trend was against me reading scripts – though I ran to get the screenplay to Arrival by Eric Heisserer as soon as I left the cinema – and as someone who counts himself as a scriptwriter, this isn’t brilliant.

So when Hayley McKenzie’s Script Angel firm ran a guest blog recommending we read one script a day, I was ready to hear that suggestion.

I read that blog on 22 December and from 23 December, I’ve read a script every day. The blog is right. I’m thinking in script form again. But I’m also just enjoying it. Because I’ve made it a daily task – it is actually there on my OmniFocus app To Do list every day – then I tell myself it’s work and for the short time it takes me to read a script, I seem to allow myself to be fully into it. Concentrating and yet also relaxing.

Today’s was Give Me a Ring Sometime, the pilot to Cheers by Glen and Les Charles. I tell you, television pilots are surely the hardest scripts to write and I knew that Cheers had one of the absolute best. I’ve seen that pilot episode many times but I haven’t read it before. And just like its spinoff Frasier, arguably the finest pilot script there is, seeing it on the page makes you appreciate it more.

It also makes you appreciate editing. I know Frasier was cut down to fit its ridiculously short on-air time and I’ve always seen that the pilot script was actually improved by the cutting. Now I know that Cheers, such a familiar piece of television to me, was also cut down. One entire character dropped completely and I think rightly.

Excuse me while I go watch the episode to see if there’s any sign of her. Yep. Once you know this woman had a significant role you can’t miss her. But that entire role is gone and I’m off pondering how her absence alters the tone, the pace, the humour. I’m also pondering how that actor felt, but that’s less because I’m a writer, more because I’m human.

Anyway, I’ll be back reading scripts tomorrow. If you’re into film scripts, by the way, bookmark the Daily Script and Simply Scripts. Neither is the best-designed site and in the latter you have to hunt to avoid unproduced scripts by fans.

If you’re into TV, you can get many scripts on both of those sites but by far the best resource is one called just TV Writing. I adore that one.