You’re so the only person I can tell this story to that I am convinced I may have tried before. But I have a new ending. Can I have a go at talking about Broadcast News? 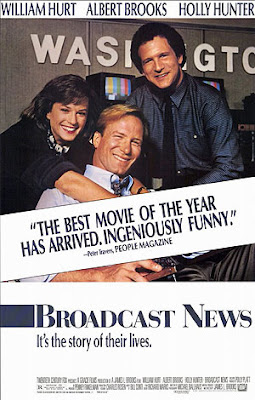 You remember the film, of course, it was released in 1987. I really liked it – I’m a journalist, I’m a drama nut and love dialogue so a movie about news written by James L Brooks would have me grabbed whether or not it starred Holly Hunter and Albert Brooks – but I also particularly enjoyed the soundtrack by Bill Conti. At the time I didn’t believe an album had been released: I think now that there was one but only in the States and this was pre-internet. This was a disappointment for two reasons: obviously I wanted it, but I also wanted to know what a particular French track is that gets played in it.

Flashforward to the DVD release a few years ago. For some reason I still can’t find a listing for a soundtrack album but I’ve bought the DVD – and I rip the end-credit music.

It’s on my iPod now. Lasts about five minutes and of course it has the orchestral music score parts in it, maybe a bit repetitive now, maybe I like it more for having liked it then, but there it is, the main score theme. But it’s also got other parts of the music, including not only a long segment of that French track, but also for the second verse, the sound of Albert Brooks singing over it in character, just as he did in the film. And it’s even got a version of the bit of the film when people come into the news studio to play their syntho-sequency-type new theme for the bulletin: a cheap synth with them sing-explaining along the way “NEWS! NEWS! The strings take the melody! LAAAA la da daa daaaa – COUNTER MELODY! Da dad daaa daaa dadaa a adaaaaa BIG FINISH – ba badda BA!”.

I adore this five minute slice of the film.

And a little while ago I realised something. Call me slow.

But this slice has the French track in it.

It has a substantial part of the track.

You know Shazam, right? It’s an iPhone app, one of those that just makes you go wow. Hold your iPhone next to a speaker, tap a button and Shazam “listens” to the music. Then it trots off, finds what the track is for you and gives you various options for buying it. Really, very impressive stuff to see in operation.

So I saw it in operation. I played my Broadcast News rip and when it got to the French track, I tapped the button.

The track is “Edition spéciale” by Francis Cabrel and I bought it.

It’s in my ears right now. Hear thirty seconds of it yourself on the US iTunes Store or the UK iTunes Store.

It’s taken me 24 years to find this song. I am singing along to the same bits Albert Brooks does and this, specifically this, is why you and I should both be glad this is not an Audioboo entry.

2 thoughts on “The strings take the melody”