I launched my new website yesterday, www.williamgallagher.com, and blogged about it. If you’re going to make an announcement, you should make it and then shut up. You shouldn’t blurt on to a totally unrelated point before anyone can have read your promo piece.

I have to talk to you about this. So bollocks to waiting a decent interval for another blog.

There are certain lines that make me weep. Emily Dickinson’s “hope is the thing with feathers”, for instance. Of course the power is always in the meaning and in the context, of course it’s the same whether I read those words in a poem or I hear Dar Williams’s beautiful You’re Aging Well. And of course it is never, say, the actual shapes of the letters on the page or on the screen.

Bruce Springsteen has today released a video for Rocky Ground. This song will always mean empty highways to me, far more than his songs that are famously set there – listen to The Ghost of Tom Joad for a moving, despairing description of a highway – because that’s where I was when I heard it. I was moved by the song, it’s the reason I bought the album Wrecking Ball even having not been impressed with the other tracks.

Videos are meant to sell the song, sometimes in every sense, and I’ve already bought so I might not have watched but look around: this video is getting huge coverage online. It’s not the first single from the album, it’s not as if the album is still new, but I’ve no idea what other videos have been made because none of them are this strong.

Springsteen isn’t in it. It’s a stark, monochrome film overlaid throughout with someone handwriting the lyrics to the song. Rolling Stone: “Mixed with the song’s steady beat and soaring gospel chorus, and of course Springsteen’s own pained howls, the clip never loses its power.”

I’ve not spotted this before today but there is now a little genre of pop videos that use the physical shape of lyrics. I know the one you’re thinking of and I suspect you’re right, surely this started it all.

Pardon? You were expecting something else?

The first one that really arrested me, though, was Dar Williams’s As Cool As I Am. If you’ve known me longer than a biscuit then you know I’m a fan of hers. I’d say I admire Williams’s work but that sounds quite detached; it sounds as if I rate her technically or something. I do, but that somehow hides how much I just love her music. I’ve said it before: I wouldn’t kill to write like Dar Williams – but I’d maim.

It all began here for me. I play you this and I can see me sitting in the house I lived in back in 1996 or so, watching this on our even-then ancient TV that was later to explode. Presumably with excitement.

Notice that word ‘falling’ which literally falls at 1’40” or so. It’s not a lyric yet it’s right. Then toward the end there’s a lyric that feels as if it’s surely wrong: she sings ‘I am the others’. But it’s a perfect example of the wrong word (or maybe plural in this case) being exactly the right one. I don’t think I could’ve written that and this is a weakness in my work.

I interviewed Dar a few years after this and she mentioned wishing she could re-record her older albums now that, she felt, her voice was stronger and she’d performed the songs that much more. Also because she was just that much more experienced in the studio.

As Cool As I Am is redone on her live album (iTunes UK, iTunes US), then again on her particularly fine Many Great Companions (iTunes UK, iTunes US). Off the back of that last version, she released a video that I think has an especially strong version of the song – but it doesn’t have lyrics on screen or projected. I’d still like you to see it.

Plus of course, all these songs have been in English: if I couldn’t read this language, you have to wonder whether they’d have any impact at all.

But then text is generally black on white, isn’t it? Plus here’s a video in colour and whose strength comes from the burnt-in text subtitles – and I’d say the non-English lines are the most powerful.

I’m not sure, to be fair. The subtitles are replete with powerful lines and that they so quickly break away from the lyrics to become a separate yet connecting story mesmerises me. I wish the font were a touch stronger; it looks video-generated and a bit weedy. But you can’t take your eyes off it.

I know I’ve said before about Emily Dickinson making me weep – once, at a cancer awareness event, that hope line was read out and I shook; I’m shaking now – and I’ve obviously said numerous times that Dar Williams can’t half write.  I must’ve mentioned Rocky Ground before too. But I don’t think I’ve ever blathered on entirely about music.

And I’m not going to now, either. Not entirely. Because there’s this film.

The film is fine. I remember it being quite deftly written; I think I remember it being well performed. But I know exactly which sole moment really worked. A character has typed one single line of text and for a moment, for several frames, it’s the only thing on the screen.

The line itself is important and we’ve heard it before, building to this moment. But seeing it as text is a slap. We’ve not seen text on screen since the credits, we don’t often see text in movies anyway. The shape of the letters and how they’re written on a typewriter speaks to what we know of the character who wrote it. And we are the characters who are reading it.

Film is a visual medium. Pop videos are surely an entirely visual medium: the images can overwhelm the music. But just once in a while, it’s text and the actual letterforms that pull us in more. 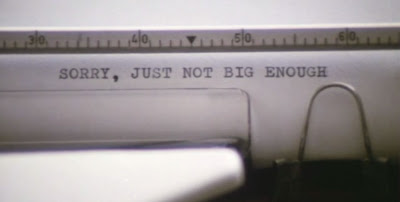