It does strike me that for a blog about writing, and by a writer, I’ve not often talked about writing and How To Do It. This is very bad because of course without me, what hope have you got? I know you look to me for leadership and it’s a burden, I won’t pretend it isn’t. So it’s time I gave you the Secret.

Perhaps you want to be a Hollywood A-list writer, perhaps you want to be the next Shakespeare. As someone who is neither, I am willing to share the secret at no cost. I feel a need to break the sarcasm for just a second and mention that if nothing else I do write for a living and have done so for most of my career. And now you, too, can benefit from my brilliance. Please, hold your applause.

I ask only that in return for the Secret, I be allowed to ask you to do something and that I then get to wibble on about My Most Unexpected Influence. Do we have a deal?

I’m going to pretend we do or this is a short blog.

The thing I would ask is that, if you’re a scriptwriter, write dialogue. If you don’t write dialogue or if you think dialogue doesn’t matter, there are many career opportunities open to you in retail.

So, now, the Secret.

Park your bum on the seat and write.

That’s it. I accept PayPal.

What I’m saying is that I don’t think you can be taught to write. I think you can learn to shed certain things, I think you can be exposed to influences that shape and improve you. I’ve been on courses where types of writing, such as thrillers, have been analysed in such a way that they made me think, that made explore ideas. But then I’ve been on courses where I’ve been told exactly how to write soap. I’ve sat in talks where an expert has given us all the precise steps on how to get into TV and I’ve known, actually known, it was bollocks. Demonstrable bollocks.

Alan Plater used to teach at Arden and that’s a course I wish I’d gone on. But – have I told you this already? Stop me if you know it. He told me that the best thing he did was to enable a writer, to let someone write. There was a particular guy who just wanted, just needed, to be left alone in a corner to write. Alan talked to him every now and again but otherwise, that was it. You could argue that he should’ve been able to sit at home and do it rather than pay whatever Arden charges for courses, but it took the course, it took Alan, it took being allowed to write.

I should do research before I talk to you: I’ve forgotten again who the guy was. But later on he thanked Alan the night he won his first Bafta.

So I’m saying you don’t need the course parts of a course, you need the time and the focus. When you’ve parked your bum on the seat, you can get this at home too.

Follow. Earlier today, I was faffing about doing no work at all and half feeling guilty, half-enjoying. I channel-flicked on the TV and came across an episode of Star Trek: Deep Space Nine. It’s not Alan Plater, but I’d forgotten that I do regard that show as the best course in TV writing I ever took.

I’m not saying it’s the best TV show ever. One of my first newspaper articles was a feature about DS9 and I gave the pilot a fairly bad review: primarily because I found the acting in it to be so very poor. But you know Star Trek is a big, big business: I read years ago that it had earned Paramount over a billion dollars and a lot of that came from the merchandise. If it could conceivably become a shrinkwrapped product, it was and as the barrel was scraped, eventually there came the last thing possible. With barrel tar in its fingernails, Paramount sold the scripts.

They released two CD-ROMs (do you even remember CD-ROMs?) containing all the scripts to Star Trek: The Next Generation and Star Trek: Deep Space Nine. That’s 354 one-hour screenplays, all wedged into some annoying faux Starfleet screen designed to fight you reading a line. But you could easily prang the scripts over into Microsoft Word instead and read them there.

Now, I’ve seen most of The Next Generation and enjoyed it well enough, but the scripts were a chore. Really a struggle. I would not have realised it until I read the scripts but The Next Generation wasn’t made of what I’d call stories, it was made of puzzles. What is causing this technobabble problem? How will the Enterprise escape? Once you knew the answer, because you’d seen the show, the scripts had nothing else. No meat, no real characters. If you’re a fan, you’re disagreeing with me and I’d be on your side if I hadn’t read the scripts and found this.

Can’t remember how long it took me to work through the Star Trek: The Next Generation scripts but it was a long time. Possibly years.

I’m surprised that I made it, and more surprised that I then turned to the Deep Space Nine ones: I’d had a bad experience with TNG and I hardly knew DS9 beyond giving it a bad review in The Independent. But this was a chance to read seven seasons of scripts, to see how a successful show starts, finds its feet, moves on and progresses and concludes.

Besides, two scripts in to Deep Space Nine, I was enjoying them. Real characters bitching at each other, enormous political and religious pressures, a lot more wit than TNG and good people doing bad things, I flew through the scripts in a couple of months. They read like a novel.

I liked them so much I began watching the series and I began really gingerly with that pilot. By now I knew the characters extremely well, I knew where the show was going, I was going to like the pilot more. Yes. But only a bit. The acting is still startlingly poor. I watched it again tonight (I bought all seven seasons on DVD) and it looks like every scene was shot at 2am and odd line readings are left in because they had no more time. 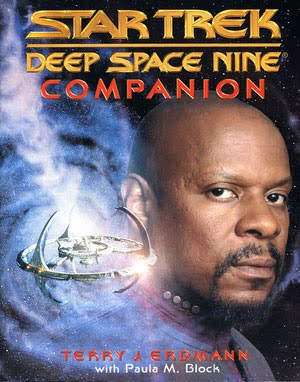 I know that a lot really were shot at that time, too, because if DS9 was a great TV course, there’s a book that I am equally a fan of: the Star Trek: Deep Space Nine Companion by Terry J. Erdmann and Paula M. Block. Can’t remember what it retailed for when I bought it but I just looked for you on Amazon and it’s changing hands for £95. Well worth it. It’s billed as being about the backstage stories of the show and it is, but it’s really about the writing: every one of its 176 episodes is detailed with interviews with the writers and producers. What the original idea was, why it changed if it did, how it worked, why it was successful and – this is really key – why it wasn’t. The episodes the writers wish they’d never done. That makes it more believable when they speak of episodes they are proud of: this isn’t a promo piece, it’s you sitting down with these writers.

I went back to the start. I’d read the script, I’d watch the episode, then I’d read the Companion’s notes. What did I agree with, what worked for me, what I didn’t and didn’t.

I wish there’d be something like this for Lou Grant or Tutti Frutti. The Beiderbecke Affair. The Sandbaggers. But I have a lot of respect for Deep Space Nine and right now, I’m really tempted to read it all again.

Park your bum on the seat and write.
When you’re not writing, read scripts.

‘Ere, let me give you a head start: those 176 Star Trek: Deep Space Nine scripts are now all online.

And then sit down to do some work.

2 thoughts on “Wherein I deign to give you writing advice”