In the late 1980s, when Angela and I were on one of our very earliest dates, we drove to Wales. I worked at a radio station then and had access to the kind of music library you could only dream of. Today you can dream of it and just glance up at your own iTunes collection. But at the time, this meant I could ask Angela to list her favourite 50 or maybe even 100 songs and know that I could get them all for her.

I did my own list too and that’s what I got: not a tape of her favourites, but four or five cassettes filled with music that alternated between hers and mine. Whatever you thought of the current song, you knew one of your utter favourites was next.

It was a good idea and a nice day. But over the years, much as we played them, those tapes did slowly vanish in various house moves or when Angela’s car was nicked. The original lists we wrote vanished even sooner. Neither of us have any idea what was on any of those tapes.

But when I say they vanished, actually one survived.

But when I say survive, I’m being generous. It has floated back into view every few years as we’ve moved or I’ve done some big rearrangement of my office furniture. I’ve always liked coming across it but it’s been a moment of nostalgia rather than anything I can actually use: you’ve already guessed that we don’t have anything that could possibly play a tape cassette. But there is also the more permanent fact that the tape broke very many years ago. At least fifteen years ago. 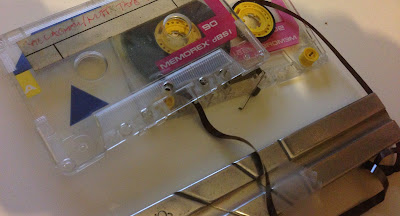 I spent four hours this week disassembling that cassette and attempting to get it to work again.

To be completely honest, I thought it would be easy. I used to work in a radio station. I must’ve cut tape thousands of times; I’ve edited music on reel to reel tapes where you physically find the beat and slice through that part with a razor blade. Right in front of my office Mac is a radio cutting block that I used to use for that sole purpose.

But the reel tape is wider than cassette tape and also stronger. I did undo all the plastic and get out the reels, I found the break in the tape and I laid it all out in the cutting block but it wouldn’t bleedin’ stay in long enough for me to do much.

Hours I spent getting to this stage. And when I had it down to just one break, I put some Sellotape over the join. You used to mark out where you wanted an edit by making a line with a yellow Chinagraph pencil and then you’d razor the bits apart and splice them back together with a very thin piece of white tape. That tape was exactly the width of the reel tape and you put it on lengthways.

I didn’t have splicing tape. I do have Chinagraph pencils but I can’t find them. So I did it by eye and I stuck down Sellotape lengthways, going across the join and then – I didn’t have a bare razor either – trimming the tape with scissors.

You know how small C90 audio cassettes were, I now know they are incredibly fiddly. I also knew that it was going to be impossible to trim that Sellotape closely enough, there was always going to be tiny extra width where the join was. And I also knew that Sellotape is substantially thicker in depth than splicing tape so as I’d thread it all back onto the cassette’s wee take-up spool, there was going to be a bump. It might be enough to throw the tape off the reel, it’d definitely be enough to cause a hiccup, and it might bend the little pieces of metal and plastic that are meant to hold the tape against the playhead.

There was no possibility that this tape would be properly repaired but hours of surgery should mean that I would be able to play it – once. Just play it once and get the track list off there.

I borrowed a tape player from my mom. She hasn’t used it in decades and it was dustier than archaelogy but it did power up. She loaned me the speakers too but – um, she’s not reading this, is she? – I wasn’t entirely sure where they were. Plus, I was doing this in the middle of the night before Angela and I went away on holiday so to be quiet, I plugged headphones in. 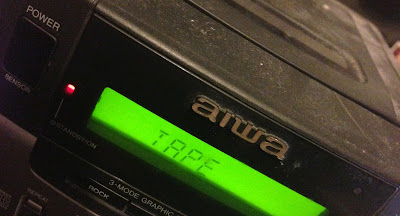 Like music being played backwards. I’ve heard that often enough, you used to wind tape by hand to get to the exact point you needed plus you’d rock it back and forth over a bit when you were judging the right moment to cut, so I knew what I was listening to. I just didn’t know why.

And I still don’t. Because even as I tried figuring out how I could’ve reversed the tape somehow, it managed to right itself after I’d held down fast-forward and play.

Well, I say it righted itself… Really it was just playing in the correct direction. You couldn’t hear it well enough to enjoy it, but you could make out the songs. Most of them.

Alright, some of them. For a few of mine and for very many of Angela’s, I had to use Shazam. Picture me in my office at 1:30am with one earpiece in my ear and the other pressed against my iPhone’s microphone.

I don’t want to tell you what the tracks were because I’d rather you imagined what you would’ve put on. But I will tell you that Shazam was convinced I’d chosen Liebe Fängt Im Herzen An by Nicole Freytag when actually it was Eric Clapton and Michael Kamen’s main theme from Edge of Darkness.

That went on the list. As I nursed the tape through to the end and then realised, er, I had to now nurse it through again on the other side, I wrote down each track. I’d never go use Angela’s computers without her knowing – it’d feel like going through her handbag – but our iTunes libraries use home sharing: if her Mac is on, my iTunes shows her entire library as a playlist and hers shows mine. So I could search across both our iTunes without giving the game away.

There were two tracks of mine that I didn’t have. Plenty I didn’t still listen to, but two I didn’t have. There were six she didn’t. I spent about a fiver on the iTunes Store getting hers and 79p getting one of mine. Amazing how those 79p and 99p amounts add up.

Edge of Darkness wasn’t available anywhere. It doesn’t appear to be available to buy in any format: you can sometimes get a vinyl EP on eBay but I already have that, that’s what I taped it off in the first place. So I used an alternative means of acquisition.

This morning, as I write this, I got into the car with Angela and handed her my old iPhone 4 – looking like this. 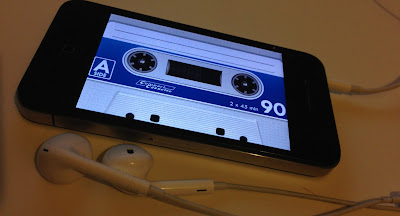 That’s an app which just plays whatever is on your iPhone’s music library but displays a moving cassette and a “handwritten” title. I rigged it so that instead of it being many songs in a playlist and therefore the title would be just whatever the first song was, it said “Wales Tape Side A”.

I wish we still had the original lists. I wish I hadn’t chosen The Eve of the War from War of the Worlds. I wish I’d dragged the original version of Suzanne Vega’s Solitude Standing instead of her recent acoustic one (look, it was 2am and I was trying to be quiet, I saw that title and figured I know that one, that’s easy, just drag it over and get back to trying to figure out who on Earth John Foxx is).

But by the time we reached Lancaster for lunch, we had driven through 1989, we were peeking back through the walls since then and reliving both a special Wales day and how we had met in another music library back at BHBN hospital radio.

You’ve gathered that Angela didn’t know I was going to do this. Debbie, a friend online equally late at night, heard about it at length because I had to tell someone when I’d finally got it all working. Mark, a soundtrack fan who’s really brought me back to the form after years away, worked with me on the Edge of Darkness lark though did not in any way consult or consort with alternative methods of provision.

And now you know too.

One thought on “Making tracks”