I now write a lot on here via Drafts 4 and there’s a thing that used to take me three steps that now takes one. (If I’m quoting an article, I would take three trips back and forth from my browser to where I was writing the story: once for the big quote, once – if I’m lucky – for the title, author, date and name of the site and then once more for the website URL address. Now I copy the author and date while Drafts 4 grabs everything else and then pops it all into a new article in precisely the sequence and layout I like.)

Call it three steps I’ve lost: two of the copying-and-pasting ones plus one for the layout. Quotes on The Blank Screen are always indented and followed by a block that has the title, author, site plus date and is a link to the original. Also, somewhere in the rest of the article I’m writing I will direct you to read the full piece on the original site. Drafts 4 gives me a typical “read the full piece” line of text and makes the words “full piece” be a live link to that original. I will change that sentence eight times out of ten but it’s there waiting to be changed.)

It shocks me how much speedier I am having got rid of these two or three tiny little steps but I am and it is vastly more so than you would predict by just removing the time they took. Part of it is concentration: the steps were clear and simple but took skipping between apps and in the time that would take, my mind would wander.

So I do resist trying to quantify how much time an idea or a method or an approach will save me and, given how fast I type, I am deeply suspicious of even the great TextExpander‘s claim that it has so far saved me 229 hours typing since 19 June 2013 when I bought the thing.

I’d like TextExpander to give me a clue how long it took me to set up the various little snippets of text that it will expand out for me. And I’d like to know how long it took me to setup Drafts 4 exactly the way I want. It wasn’t trivial: I think Drafts 4 is remarkable and remarkably easy to use but I set it up for me through a fair bit of trial and error. If you told me I spent two hours setting it up, I’d believe.

And I’d think that worth the time because such a small change has made an enormous difference to me. Many automated things have made a big difference, I’m really only surprised that I don’t do more. You know about Drafts 4 now and TextExpander, but there’s also IFTTT. Every time a story is published on The Blank Screen, a copy gets added to an archive in my Evernote account. If you say something lovely about me on Twitter, I’ll tap that little Favourite button – and without my doing anything else, I know your tweet has been saved for me to another Evernote document. I seem to use Evernote a lot.

OmniFocus. I live in OmniFocus. I think the most automatic of the automated options to do with OmniFocus that I use is Mail Drop and I really, really use that. If you send me an email with a task in it, I’ll forward that straight into my OmniFocus To Do list. Apparently I’ve used that 1,977 times and the most recent was 3 hours ago. With a bit of digging and a Wolfram Alpha day-counting search, I can work out that this means that since I’ve had OmniFocus Mail Drop, I’ve used 2.89 times a day on average. I am truly astonished that it is as low as that.

I started using it in December 2012 and there’s no way my little brain can remember how long it took to set up but looking at the process now, I’d say it was ten minutes with nine of them spent reading what I had to do. If you want to use it yourself, it’s free but you need OmniFocus and you should have a look at this Omni Group explanation.)

All of which is a long way to say a short thing: automation can speed up your work like nobody’s business but it takes time to do. So to roll out my favourite quote from The Simpsons, if you’re wondering whether to automate your work: “short answer yes with an if, long answer no with a but”.

If it takes you longer to automate something than this automation will save you, don’t do it. Except I really would not have predicted how much saving those steps by Drafts 4 would save me time and effort. Rather than just shrug and admit that your mileage will vary, let me show you the reason I wanted to say all this to you today: 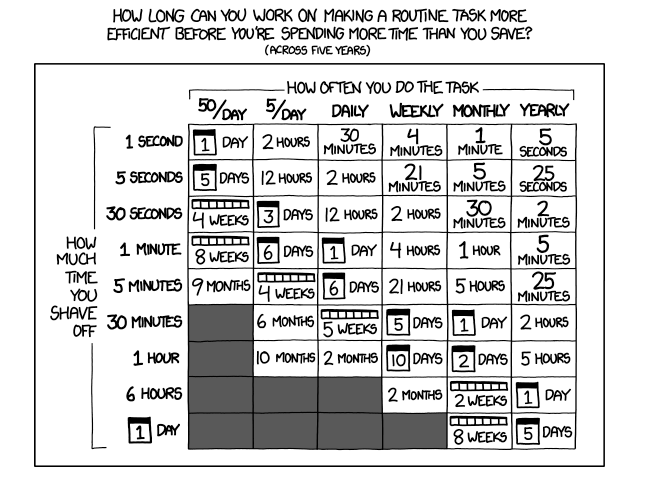 That’s by xkcd and while it’s the full image, while you don’t see any more of this one, there is much, much more to see and relish on the xkcd site.