Because you’ve done this too:

EAU CLAIRE, WI—Hoping for additional emails to quickly arrive and take up space in his inbox, local man Steve Mazza told reporters Wednesday that he is patiently waiting for a humiliating message to cycle off the first page of his email program. “It looks like I’ve got a few more days until there’s enough new stuff to bump this thing to the second page,” said Mazza…

Read the full piece on The Onion.

Dash over to The Onion for the full version of this: I particularly like a section with tech specs for the two phone’s cases. 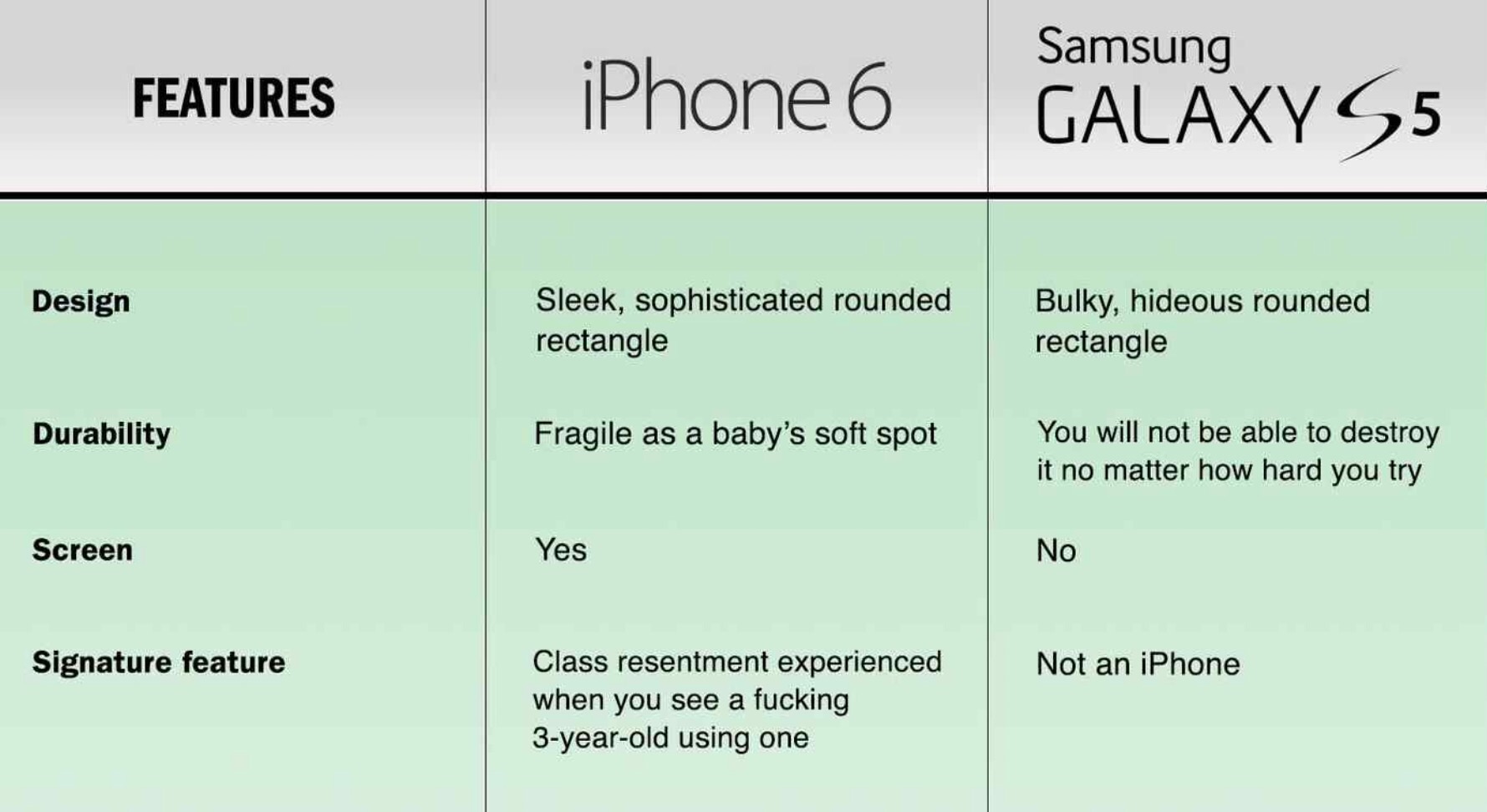 Now you can use this hack on your family too:

David and Rebecca Lehigh had a familiar problem: four children—1, 5, 9, and 12 years old—with no way to organize them. It was a logistical fiasco…until David came up with an utterly genius solution.

Instead of keeping their kids in color-coded binders or driving themselves crazy trying to memorize their faces and voices, David and Rebecca did something so simple you’ll kick yourself for not thinking of it first: They gave each child a distinct name.

“We called one of them Leo, one of them Tara, one of them Megan, and one Zach,” said David, explaining that doing so has “made our lives a thousand times simpler.” “And the kids know what their names are, so when I want one of them to listen to me, I just say their name, then whatever message I want to send to them.”

The Lehighs say their name system is helpful for telling the difference between kids who look similar or are the same gender, and allows them to get their attention without pointing and shouting, “Hey, you!”

Read the full articleto find out how you can use this timesaving productivity trick on your own children.

The Onion’s new Buzzfeed-like mocking site has a perfect deadpan article about success which I might even have linked to if it were real. I wince admitting that.

Life is short. If you wait too long to go out and do what you want with your life, you’ll never get a chance to see your dreams come true. That’s why I tell people to stop letting the fear of failure hold you back.

Take me for instance. For years, I dreamed of just reaching out and grabbing a police officer’s gun right out of its holster and running away as fast as possible, but I never even tried because I was afraid of failing. What if I wasn’t able to pull out the gun fast enough? What if the cop yelled at me? What if he caught me and sent me to jail? There seemed to be an endless number of things that could go wrong, so I never even gave things a chance to go right.

Then one day, I decided to just go for it. I saw a cop standing on a nearby street corner and he was kind of zoned out, so I snuck up on him very quietly and reached out for his gun. Was I afraid? Of course I was—but this time, I didn’t let my nerves get the better of me. I just grabbed his gun and I booked it as fast as I could.

See how that works out for him.

From Clickhole, The Onion’s version of those Buzzfeed sites that we keep getting friends sending us links about. I realise I’m sending you a link to this site which is a parody of people sending links, but.

Crafting a smart, snappy password that engages the reader right from the first character is tricky, especially if you’re unfamiliar with the form. And make no mistake: The best way to start writing truly great passwords is through years of diligent practice. You’re not going to sit down at a keyboard and just produce an all-time classic password like “let$g3titstart3d” on your first day.

Still, anyone can benefit from these tried-and-true tips as he or she stares down the blank input field and prepares to compose a strong, succinct password.

1. Avoid clichés: These include “password,” “123,” and “letmein.” Such trite expressions have no place in a serious password, unless the author makes it very clear they are intended ironically.

2. Keep it short and sweet: Say what you have to say as concisely as possible. It’s nearly always correct to abandon the strained clunkiness of something like “90sbulls4everJordan23” in favor of the classy simplicity of “23.”

There is much more.