The always excellent Brain Pickings has an actually delightful piece about a book called A Funny Thing Happened on the Way to School:

…celebrated children’s book author Davide Cali and French illustrator Benjamin Chaud weave a playful parable of this childhood tendency to come up with excuses so fantastical that they become charming stories in their own right — a crucible of creativity and a sandbox for the young mind to play with the building blocks of storytelling.

One morning, the little boy is late to school and when his teacher inquires about the reason for his tardiness, he proceeds to offer a litany of imaginative excuses. Giant ants ate his breakfast! Evil ninjas ambushed him on the way to the bus stop! A massive ape mistook the school bus for a banana! His uncle’s time machine misfired and sent him back to the dominion of dinosaurs!

A Funny Thing Happened on the Way to School: A Charming Catalog of Excuses and an Allegory for How Human Imagination Works – Maria Popova, Brain Pickings (undated but 5 March 2015)

Go get your lunch and have a read of the full piece.

They could’ve done it as straight text – and they have done it as a spreadsheet – but Information is Beautiful has produced a graphic about 52 of the “world’s most contagious falsehoods”. In other graphics, the most annoying bollocks we all tend to believe. Here’s one sliver of the graphic for example: 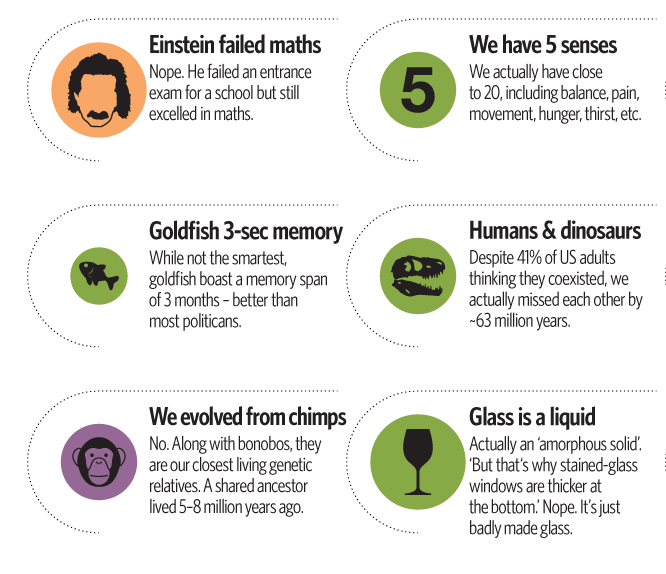 Do check out the full image plus more details on Information is Beautiful.

Here’s the thing. George S Kaufman read John Steinbeck’s Of Mice and Men when it was published in 1937 and immediately commissioned him to write a theatre version of it. Reportedly Kaufman said: “I don’t know if there’s a dollar in it, but it’s got to be prepared for the stage and Steinbeck’s the man to do it.”

Not only did he buy the rights and commission Steinbeck, he put the writer up at his ranch.

Fine. And especially fine since at some point around then Steinbeck announced: “I don’t go to the theatre much and I don’t know a darn thing about actors.”

But he may have been telling a pork. Like all writers do when necessary, like you need to do a bit more often. Don’t seem needy but do be ready.

For in correspondence with George Albee the year before, Steinbeck said: “It is a tricky little thing designed to teach me to write for the theatre.”

So he was planning a stage version long before he was commissioned. (Does that sound familiar to you at all?) You have to admire his chutzpah but you also have to admire his stage play, which in this 77th year is being revived all over the world – including a production at my favourite, the Birmingham Rep.

Where he may differ from a lot of us is that he didn’t go to see his play. It opened in New York City, it opened on Broadway and it opened to immediate rave reviews and big business, but he didn’t go. Reportedly, he believed that his script was perfect and that any actual production would necessarily be a let down.

Ah, we all think that about our writing.

Don’t seem needy but do be ready. And maybe a bit more modest, I don’t know.

Of Mice and Men is coming to the Birmingham Rep from 10 October to 1 November and you can buy his perfect – I do agree with him – playscript from Amazon here. 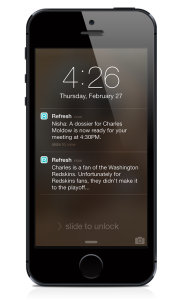 Previously…  about six weeks ago I told you of a new iPhone app that scanned your calendar and researched details on all the people you are due to meet. It’s called Refresh and as yet it is still not available in the UK. My quick summary review was that Refresh is astonishing, if not a little creepy. It suggests conversation topics (“Say, haven’t you just been to Cuba?”) and that was far too far.

I’ve not used Refresh since I finished the review but I also didn’t delete it. Chiefly because I forgot all about it. But last weekend I it prompted me. I had a calendar event called just “Alan and Cathy” and Refresh prompted me with extensive details about Cathy. Without my asking or even realising, it was parsing the calendar and it recognised which Cathy even though the entry didn’t include her surname. I have no idea why it didn’t pick up on who Alan is. I also have no idea why it prompted me then when I must’ve had a dozen meetings in the past six weeks.

Nonetheless, it was fascinating: it had culled details from Facebook, LinkedIn and I think other places but I can’t tell what. I really did learn things I hadn’t known about Cathy. And I was able to start a conversation. “Say, did you know you share the same birthday as Emmylou Harris?”

Yesterday I had four meetings and Refresh nudged me with a notification for two of them. One of which was startling because while it was with someone I haven’t really known all that long, I had no idea she was a Philosopher with a particular company, I had no idea she lived in Bulgaria.

She’s friends with a security consultant who winced at her Facebook profile and said she was saying far too much, she was making identity theft far too easy. So she tells me that she had a quick run through her Facebook page and changed everything to a lie.

I love that Refresh has this almost alchemy-like ability to ferret out information and that it is stymied by good, old-fashion porky pies.

Refresh is free on the US App Store here and the company says it will be coming to the UK.