You’re familiar with the concept of setting an alarm to wake you up. You’ve come across this before. But I think this is new:

Set an alarm for when you have to go to bed

We all stay up later than we should given how early we have to rise tomorrow. And this tells you when to go to bed. It’s not ever going to be a shock to you since you choose the time but still, it works.

Without exception Matt Galligan’s internal clock nudges his body awake at 6:30 a.m., give or take 20 minutes. “If I go to a bachelor party in Vegas and I’m out until 6 in the morning, I still wake up at 6:30 a.m.,” the CEO of Circa, a popular news app, told Fast Company. “I can’t change.”

Galligan taught himself to wake up without an alarm clock about seven years ago, when he first learned about body clock training. The process is simple: Set an alarm for the same time every morning for 30 days and resist the snooze button. Beware: Waking up early for an entire month, including weekends, results in a lifelong dedication to being a morning person.

How Crica CEO Matt Galligan Trained Himself to Wake Up at 6:30am Without an Alarm Clock – Rebecca Greenfield, Fast Company (11 August 2014)

To be fair, mind, Greenfield’s full piece is really about how you rig your sleep to make sure you’re ready to get up.

Still, I get up at 5am and I’m finezzzzz

Today is the 250th day I’ve got up at 5am to write. That doesn’t feel like much given how long I’ve been a writer and it will feel feeble if you’re a farmer. But I want to mark this little anniversary in some way.

I only just thought of that this morning as I lurched very slowly out of bed. Yesterday I fair bound up out of there, today was tougher. Perhaps I should’ve kept a record but very broadly I think the 240s have been some of the hardest since the very first 5am starts.

It definitely goes in cycles, though.

There were patches even during the 20s and 30s where I would bound upright and not think about all this. There were times somewhere around 80 mornings in that I would come close to turning over.

I don’t think you need my sleep diary, if I had one, but the 5am start idea was difficult for me and I don’t think that even I can find a way to say I’ve failed at it. So there is discipline, there is effort, there are lessons.

But most of all there are results.

That’s why I do this thing. I’m not advocating getting up early as some kind of health advice. Look at me: I don’t know from health advice. And I’m not even recommending that you get up at 5am per se. What I did before all this began was to experiment with looking for when I wrote the best. Also the most, I was on various deadlines so most was an important issue, but chiefly the best. When did I write the best and preferably not have to rewrite quite so much.

It’s just an astonishingly awful thing that the answer is 5am.

But, okay, at least I know.

And now, 250 mornings in, I know these things too:

1) Bribery and threats
For the first 180 days I used my own Brutal £1 Pot Trick (as covered in my book, The Blank Screen, UK edition, US edition) to trick me into getting up. (The short summary is that I did bribe myself each morning but I also threatened. There was a treat for doing it but also a very big penalty for not.) I’d probably carry on using this, I had intended to and lately I’ve wondered whether it would help to try again, but it’s an expensive kind of thing and I wanted an iPad.

2) Alarms
I love my iPhone but there are times I hate my iPhone. Specifically at 5am. Or rather at about 6:30am when I’d wake up feeling great, feeling refreshed, feeling amazed that I could be so renewed and reinvigorated by a night’s sleep that was ending at 5am. And then seeing that my iPhone’s alarm was going off.

The alarm has to be very quiet so that I’m the only one it wakes, being right on top of it and able to switch it off quickly, but it does have to make a noise and sometimes it doesn’t. Not because I’d turned the volume down too low, not because I’d switched some setting.

Yes, I had a moment of worrying about deafness. There was the screen with its Snooze button on that white alarm banner, but no sound.

After this had happened a few times – I have no idea what caused it, there’s no pattern I could see – I gave up setting an alarm for 5am.

Instead, when I’m going to bed, I ask Siri to wake me at 4:59am. And then to wake me at 5:01am. Two alarms. Many days they both work, just once or twice neither has. And for the rest of the time, one of them has and that’s enough. 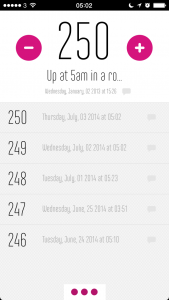 3) It’s worth counting
I often forget until hours later, but just tapping a + on a counter app is a little bit satisfying. If it’s a choice between the satisfaction of a tap and the joy of another hour in bed, the bed wins. Let’s be clear there. But as it’s really a choice between bed and all the benefits that getting up early bring, the counter wins.

4) Do something. Have something to do
It’s like laying out your clothes the night before. Have something that you are going to do first. You won’t always do it. Right now, I’m not doing it. I had a plan for what I need to do and instead I’ve come to you. But this isn’t about the discipline of making plans and sticking to them. I get up at 5am, that’s discipline enough for anybody. It’s about using this Stupid O’Clock time and making it count.

Doing anything is fine. But it must be done. Easily the worst mornings of this whole 250 run are the couple where I had nothing to do. I had plenty I could do but nothing that was vital, nothing that made me ill with worry.

It was truly, deeply, insanely awful.

There is just little so stupid as wasting time at your desk at 5am. You don’t even spend some time deciding what to work on, you start checking emails and reading news.

So if there is not a particularly pressing deadline already, I will choose something the night before and make it the thing I will work on first. The aim is to get straight to the keys, to do the fastest shower in Christendom (I often re-shower later), get some tea (I definitely re-tea later) and start writing.

Today for example, I made a note in OmniFocus that I would finish a short story I’ve been commissioned to do. Hello. This is not a short story. This is you and I talking. But it is me writing and that is the sole aim of getting up at this time.

It’s a simple aim but it works for me and I find it very difficult. So, nuts to it: today is my 250th day of getting up at 5am to write and I’m proud of myself.