Alternatively, do this to get yourself ready to sleep tonight and start fresh tomorrow:

Start by identifying an exact time when you want to be in bed. Be specific. Trying to go to bed “as early as possible” is hard to achieve because it doesn’t give you a clear idea of what success looks like. Instead, think about when you need to get up in the morning and work backwards. Try to give yourself 8 hours, meaning that if you’d like to be up by 6:45am, aim to be under the covers no later than 10:45pm.

Next, do a nighttime audit of how you spend your time after work. For one or two evenings, don’t try to change anything—simply log everything that happens from the moment you arrive home until you go to bed. What you may discover is that instead of eliminating activities that you enjoy and are keeping you up late (say, watching television between 10:30 and 11:00), you can start doing them earlier by cutting back on something unproductive that’s eating up your time earlier on (like mindlessly scanning Facebook between 8:30 and 9:00).

Once you’ve established a specific bedtime goal and found ways of rooting out time-sinks, turn your attention to creating a pre-sleep ritual that helps you relax and look forward to going to bed.

How to Spend the Last 10 Minutes of Your Day – Ron Friedman, Harvard Business Review (10 November 2014)

There’s more to it. Have a read of the full piece. 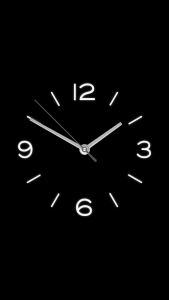 I have very clearly noticed that I sleep better when my iPhone is not displaying a clock face all night. (I do lower the brightness, I’m not daft. I’m not that daft. Okay, I’m not that daft about that one thing.) Even so, I carry right on doing exactly that and apparently so do you.

Okay, most people with smartphones keep their phones near them at night. Okay, 95% of people in a very specific study do:

We Can’t Stop Sleeping With Our Phones And We’re A Little Anxious About It – Hillary Reinsberg, Buzzed (25 August 2014)

I’m just not sure it’s a problem. I pop my iPhone onto its stand each night and I have this conversation with Siri:

Wake me at 4:59am
Wake me at 5:01am
Switch on Do Not Disturb
Open Awesome Clock

Awesome Clock is the curiously no longer available app that lets me have that clock face on my phone all night. (Gorgeously, you just swipe down and it dims, swipe up and it brightens. Love it.) And the bit with two alarms is that for some reason my iPhone will occasionally fail to make a sound if I ask for one. I set two and it works.

But the key thing there is probably that Do Not Disturb. The phone is on but unless you’re someone I’ve said is important enough to get to me, you don’t. Mind you, in case you’re reading this and thinking both that you thought you were important to me and yet I didn’t answer last night, your getting through my phone is no guarantee of your getting through to my skull. And I did dream about you last night, so you got to me on some entertaining if not very useful level. Hello again. What did you want to say?

Sorry? You want the link for the full Buzzfeed piece? It’s no trouble.

If I’m only sometimes good about adding contact phone numbers right after we speak, I’m terrible at this. I am atrocious at switching off my iPad or any screen. And I should fix that. You should fix that.

Do it at least an hour before you go to bed and you will sleep better.

A pinky promise that I swear to stand by for myself too.