I do want to tell you about the single hardest thing I’ve done, and as soon as I type that to you I think of a few other things that would be a contender. But really I want to talk with you about how astonishing it is that something which was a stone in my stomach six days out of seven every week for 18 months could be so completely forgotten.

I mean, it was writing and it was in Radio Times every week back in 2005/6 when that magazine’s sales figures were just over one million and the estimated readership was three million. So it’s not impossible that you saw it. It’s unlikely, but it’s not impossible. If you did read every week of it, though, you’d still have completely forgotten about it because it was the smallest slice of nothing.

No exaggeration. It was perhaps 100 words in each issue and lived on a corner of the letters page.

What astonishes me is that I’d forgotten it entirely too.

Yesterday, I was on the Dot Davies show on BBC Radio Wales as an author and TV historian. It was in response to the news that some 7,000 people in the UK have a black and white TV licence. A bell rang. I think now that it was a Cloister Bell warning of dire trouble because for the first time in 12 years I remembered Radio Times and the TV Stats column. I remembered covering this topic in there.

Only a week ago, I was talking with someone about RT and told them that I’d written the On This Day in TV History piece for it. I can’t remember how long I did that but it was at least four years and every issue had a little nugget by me on each of the day’s listings page. I remember that, I’m proud of that, but I’d clearly suppressed TV Stats.

But I had a couple of hours between BBC Radio Wales asking me and my being on the Dot Davies show. So I searched. I’ve got RT on PDF up to the late 2000s so it didn’t take as long to search as this will sound, but I did go through 60 editions before I found it.

I can’t show you any. Each week was this 100 words or so but it would always be accompanied by a cartoon illustration and I didn’t do those. I said that six days out of seven I was in pain about this: you’ve guessed that the seventh day was when I delivered the copy and the strain was off until tomorrow. But there was also the pleasure of seeing what cartoonist Robert Thompson had come up with.

I’d get that pleasure twice, actually. I’d usually be shown his roughly-sketched proposal and then every week I’d open the issue to see the final illustration. I can’t imagine how hard a job it was to illustrate this stuff in an amusing cartoon fashion.

At the time, though, I was too full of how hard it was to write. The job was to think of a topic to do with television and then research or calculate some statistics to go with it. Find an interesting topic, figure out the details and then hope the result was worth publishing because otherwise it was scrapped and you started again. And of course still facing that same deadline.

Oddly enough, I have an idea that this one about how many people in the UK still had black and white TV licences was among the easiest. I can’t recall now whether I was specifically asked to find out or whether it was my idea, but I’m pretty sure that I just phoned the TV Licensing people and asked them.

The answer, by the way, was 58,000 people and I either calculated or was told that at that time in 2005 this was 0.2% of the licence-owning population. At this distance of 13 years, I can feel an echo of the relief that week.

When you’re writing something like this you can’t get too far ahead because there’s supposed to be at least some element of topicality. But also you should try to have a few ideas banked up and ready. Sod that. The joy of having filed that copy and not absolutely having to think of the next one for a couple of days was fantastic.

I do say days. Because I truly had bad nights because of TV Stats.

This all sounds overblown, I know, and especially so because I’ve had many columns and myriad deadlines. Yet this one is giving me the sweats again today, over a decade since it finished.

Precisely how many films were shown on terrestrial TV in 2005? How many shopping channels are there? What proportion of digital channel profits come from advertising and from our subscriptions? Just how many characters in EastEnders are self-employed compared to real life? Exactly what percentage of characters in Albert Square have owned the Queen Vic?

You’re curious about that last one, aren’t you? In 2005, the answer was that 6.5% of all major characters in EastEnders had owned that pub.

You see the job. Try to find something interesting, try to put a figure on things we’d all noticed like that turnover of Queen Vic owners. Oh! I remember proving that the murder rate in Morse was actually pretty much the same as the real-life number of murders in the Oxford area. That was because Morse ran in very short series each year where actual murderers tended not to take such long breaks.

Week after week. I should be able to rattle off the statistics of how many I did but I’m rebelling. It was something like 18 months and I won’t research any closer than that.

I’d rather tell you instead of one moment of relieved pride. I got the commission over email, I think, but there was to be a big meeting to decide how all this would be done. Here’s how much TV Stats buried into me: I can still picture that meeting. Where it was – BBC Woodlands in London, the second of three BBC buildings I worked in that was demolished – and also exactly who was there.

I can remember where I sat and who I faced. How’s this for research? I can show you that spot. 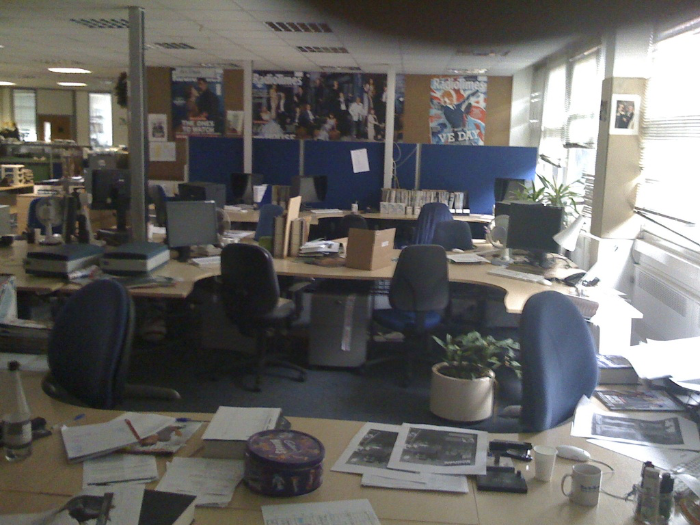 That shot is from 2008 and this was just before the place was demolished. So, first in one morning, I took a photo tour of the whole place. See that second chair from the left? I don’t remember whose that usually was but for this meeting, that’s where I remember sitting.

I can also remember that I’d misunderstood the brief and the example I’d brought had the text right but I’d illustrated it myself. I’m not then and never will be a cartoonist but I’d done some Photoshop work that was a graphical illustration of whatever statistic I’d found. I remember the art editor saying he didn’t know how to do what I’d done.

That was the moment of pride. And being gently told they had their own illustrators was the relief.

Oddly, I’ve no memory at all of TV Stats ending. I know it began because of a redesign on the magazine that saw the letters page bumped to the back of the issue. I imagine it ended because of the next redesign, but I don’t know.

TV Stats was one fraction of one job I had as a writer and yet it punched high above its weight because of how difficult it was to think of the bloody things. I did learn to write better because of it: I learned how to make the very most out of a sometimes flimsy statistic to produce an interesting read because there was usually no alternative and often no time.

And apparently it is all still lodged in my brain as it was waiting to pour out of me yesterday. I did get to bring up that 58,000 figure on BBC Radio Wales but I don’t think it particularly contributed to the piece.

There’s a bit of me that quite likes that.

Oh! One more memory? I spent at least seven hours one week calculating how much you would have to spend on Amazon to buy all the spin-off merchandise from children’s TV shows. You know it’s a lot but, sorry, I can’t either remember or find the figure.

But I can tell you that to this day Amazon notifies me each time there’s a new product to do with Dora the Explorer.