Just by the way, apparently this is the 300th Self Distract blog. Let us raise a mug of tea.

Clink. Good to be with you. 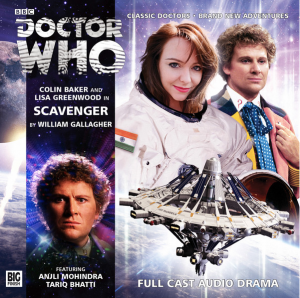 Now, here’s the thing. My latest Doctor Who radio drama came out last Friday and it’s doing rather well. I’m so pleased with how Doctor Who: Scavenger sounds and, if you don’t mind my saying so, I think it really perfectly caps off the latest trilogy of adventures for the Sixth Doctor (Colin Baker) and Flip (Lisa Greenwood). But if I phoned up Big Finish today and pitched exactly that same idea, they would reject it.

Of course they would: we’ve just done it.

But I mean if there were no Scavenger, if I’d done something else for this month’s release and I now pitched Scavenger, I doubt that it would have a chance. Because between my writing this and it being produced last year, the film Gravity came out. You may have heard of that one. It’s not the same story but both it and my Who are set mostly in Earth orbit where space junk – dead satellites, broken bits of equipment, accidental litter – is the threat. Gravity has this great tension because the junk is orbiting so you know it’s coming back around soon. In my Doctor Who, there’s certainly plenty of that but my space junk isn’t accidentally whipping around the planet, it’s hunting you.

There really is an astonishing, frightening amount of junk in LEO (Low Earth Orbit). NASA and others track everything above a certain tiny size and it’s an astonishing number. For Doctor Who, I just wondered whether amongst 12,000 bits of broken human technology, there might be one working alien bit.

I learnt all this about space junk a couple of years ago and my first thought was that we finally manage to get into space and we drop litter there. I can’t tell you the idea that started me off on this Doctor Who because it’s there in the story, it is an action set-piece and I think Big Finish and director Nicholas Briggs have pulled it off deliciously well. But alongside realising what the Doctor would do with space junk, I was also drawn to this litter idea. That’s what makes it Doctor Who to me: not that it’s got alien technology, not that it has the TARDIS in low Earth orbit, but that it’s about something we have done. What happens in Scavenger is our fault.

Only, you will go pale when you find out what we’ve really done and how much we’ve really done it. There’s a thing called the Kessler Syndrome that I refer to in Scavenger. (Just as an aside, I could not use Kessler as a name of a main character: I wanted to, nobody would’ve wanted to stop me and there are plenty of other real-world references but to me, Kessler will always be Sturmbannführer Kessler from the wonderful BBC drama Secret Army and its eponymous sequel.)

Anyway, the real-life Kessler syndrome just says that at some point, right, we will have so much space junk that we won’t be able to launch anything new. We won’t be able to get a spacecraft into orbit because there will be all this stuff smashing into it. As you may now know from Gravity or as you may well already have known, the tiniest speck of junk is an enormous problem because of the speed it reaches in orbit. A golfball-sized bit of a dead satellite would effortlessly put a hole through a rocket. So if we reach this Kessler point, we will have finally learnt how to leave the planet Earth – and we won’t be able to. Millions of years of yearning for the stars, and we will have shut ourselves off from them forever because we don’t pick up our trash.

It’s not true everywhere, in every part of orbit, and there are people arguing that we’re not there yet anyway. They agree we’re close, which is scary enough. But there is a strong argument that we have already reached this point in certain orbits.

That’s when I went pale. I’d been having such a good time up to then: researching away, learning little nuggets like the International Space Station’s pizza box. (The ISS can’t stay in one orbit because periodically it would get smashed up by space junk. So it moves. Not very far, but it moves sometimes to get out of the way. And the block of space it can shuffle about in is quite narrow in one direction, broad in another. It’s a block of space in the shape of a pizza box. I love little unexpected details like that. You’re always telling stories about people more than you ever are about technical details, yet the reality the correct detail adds is gorgeous. Doctor Who script editor Alan Barnes said to me about a completely different part of Scavenger that I had done the research, I shouldn’t be afraid “to show people your library card”.)

Now, Donald J. Kessler thought of this syndrome in 1978, when it seemed like some far-off possibility. Given that it’s thirty-six years since he said that, you’d reckon it was a fair bet that there would be at least a couple of dramas involving the issue. But for them to happen in the same few months, what are the odds?

This isn’t something that you can figure out with a ready reckoner, there are no statistics you can analyse for drama, it just seems that ideas have their time. Robert Heinlein says in one of my favourite books, The Door Into Summer, that: “When railroading time comes you can railroad—but not before.”

I have got to tidy up my office. I just had a search through my shelves for a book I know has an anecdote you’d like, but it ain’t there. Did you borrow it? And are you the one who’s still got my Veronica Mars season 1 DVDs? I must like you a lot. But, anyway, the paraphrased anecdote goes thisaway. Two writers got a meeting at Star Trek: Deep Space Nine and pitched a story to the producers who said they loved it so much that they were airing it tomorrow night. I actually think that was a good thing: maybe they should’ve checked their TV Guide, but they’d come up with an identical story so that meant they’d got the series right. That’s harder than it sounds so I’d have taken this as a good thing and I’d have invited them back to pitch other ideas. That’s exactly what the producers did and that’s exactly why.

Okay, same anecdote but this time not paraphrased and about me instead of Star Trek writers whose names I can’t find in this book I really fancied re-reading. I just hope you’re enjoying it. I was asked once to pitch a Doctor Who story at short notice and I had a very good evening coming up with something I loved. That same editor, Alan Barnes, sounded ashen in his email the next day: I’d proposed something that was near-as-dammit the same as the story that was being recorded in studio that day. (We figured out something else and it became Doctor Who: Spaceport Fear.)

Three weeks ago I thought of something I burn to write. Jotted down the key points, found a whacky title, emailed it in – and got back a reply within seconds saying something like “we love this idea so much that we sent it back in time thirteen years and made it then”. I still burn to write it, but the bones of the story were the same as an old Big Finish tale. And my wacky title was only about a syllable different from the one they’d used then.

You’re dealing with finite possibilities even in Doctor Who. The TARDIS can go anywhere and it can go anywhen, you can have high comedy or bitter personal tragedy. Yet still you’re using the Doctor and a companion or three and you’re putting them in a setting. You get a hopefully great idea and you start building constraints for yourself just in order to tell the story instead of having some random cacophony. So as disappointed as I was with that latest wacky idea being already done, I’m not surprised.

It happens and it’s normal, you just wouldn’t aim to do something that had already been done. So I wouldn’t aim today to write a story that in any way touched on the same issues or had the same setting as Gravity. I’m so pleased with how well Doctor Who: Scavenger turned out that I am beyond relieved that it happened this way around, that we made it before knowing about Gravity.

Still, I know where my next Doctor Who will be set and you bet your life I’m scouring through IMDb’s Films In Production section.

2 thoughts on “The Gravity of the situation in Doctor Who: Scavenger”