It’s the word processor for writers that just about every reviewer loves. I liked it very much in my brief use of the trial version last year: I had a particularly complicated and messy project and Scrivener made it feel manageable. I chucked in all these chapters that had been emailed to me, I sorted through duplicates and rewrites, figured out the right order and could then just work on it as normal.

I’d have bought Scrivener right there and then but for how that project required me to go back to the writer with Word files and we needed to have tracked changes. You can’t do that in Scrivener, so far as I can tell, so I didn’t get it then.

But I did today.

It’s temporarily $20. That works out to just over £11 UK and since the regular, Mac App Store price in the UK is £31, I was convinced. Sold. Bought. Using it now.

There is one extra cost: by getting this price you are going through a deal with Cult of Mac and that will also get you on their mailing list. Quite a bit. Still, I’ve bought a couple of things through them now. In fact, I’ve bought Scrivener twice: I got it for my wife Angela Gallagher last year in some deal then.

So the deals do come around but if you fancy Scrivener, now is a very good time to buy. Check out this link and do so in the next few days or it will expire.

We're in a spot where Microsoft Word has lost its strangelhold on the word processing market and other alternatives are doing well. But before it got to that level, Word had competitors then too. One of them was Nisus and I knew it well from writing news stories in computer press that covered it. I'm not sure I ever tried it myself, though I must surely have done at some point, but I had and still have a high opinion of it for two reasons.

One is that Nisus introduced some features that all the best word processors now have – and yet which took them all years to adopt. I'm thinking chiefly of non-contiguous selection: the way that you can select this sentence, scroll down a bit, select another one and then when you copy or cut, those two sentences are taken.

But the other reason I rate Nisus without having much or maybe any direct experience of it myself is that it used to engender passion in its users. Nobody ever evangelised Word. But Nisus had its champions.

And now it does again.

Things turned around in 2011 with the release of Nisus Writer Pro 2.0. This was the first version of Nisus Writer to include both change-tracking and comments, plus most of my favorite features from Nisus Writer Classic and a bunch of new capabilities. All of a sudden I had my old toolkit back, in a modern package. It was as though I'd been limited to a machete and an open fire for all my cooking needs, and then walked into a fully equipped restaurant kitchen. In the years since, it has grown even more capable and reliable.

The full piece is very interesting about Nisus's place in word processing history – and even its lore – but also specific about its advantages. If you're on a Mac and you dislike Word, take a look.

The Game of Thrones (UK books and films, US books and films) writer this week revealed that he still works on a DOS PC. BBC News quaintly explained that “disk operating systems were popular” but, seriously, DOS? Now?

Here’s where he revealed it, but then hang on for what that really means to do this.

The tech website Geek.com did a nice job researching this and brought us a screen grab of what that probably looks like: 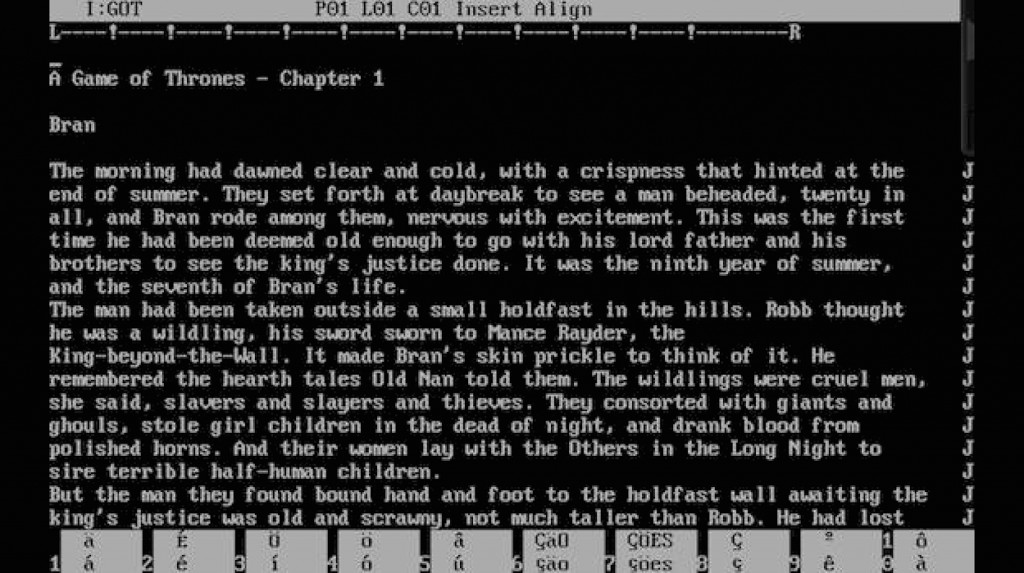 But it’s one thing seeing an image and thinking, okay, well, not pretty but it works. And it’s another thing seeing WordStar in action. This is a YouTube video of WordStar 3.0, the version before Martin’s favourite, but substantially the same. Now imagine writing thousands of pages in this.

Noisli is a web-based text editor that deliberately throws distracting colour changes at you and optionally adds in noises. Oooh, I like this blue. Cyan now. Not so keen on green.

You’re not supposed to so consciously notice the colour changes, it’s really intended to be a purposeful distraction. Especially with the sounds on, Noisli helps you focus on your writing by slipping background noise into your noggin. Just enough. It appears that we work better when there is something going on, just a little something, than when we work in total silence.

It works, too. I really don’t like the yellow but most of the colours that come by as you type are quite restful or quite sparking, quite energising.

I’ve played with the sound of rain but there is also lightning, waves, lots of things I don’t understand from the icons.

There’s just one thing to note: as the website itself says, this is in beta. Your work should be saved but do yourself a favour for now and copy the text out to somewhere else every now and again. And go have a play with Noisli.

But hopefully a lot of them are. Microsoft's Office apps for iPad have been downloaded more than 12 million times in the week since launching. That doesn't really mean 12 million people: I downloaded Word and Excel so that's two right there.

Actually, I downloaded Word and Excel, then deleted them – and tonight I just downloaded Word again. None of these are any use unless you pay an annual subscription which is doubtlessly worth it for many but isn't for me. However, you can use the apps to read Microsoft documents. I didn't have any at all the night I downloaded the apps the first time.

But tonight I got one. I'm reading a draft of a book and it happens to have been written in Word. Normally I'd just read it in Mail – that will show you the text perfectly well – or maybe I'd pop it into Pages – which opens Word documents just fine. This time I got Word back, opened it up and it's really good.

The book and Microsoft Word for iPad.

The text is beautifully crisp and well designed, it is a true pleasure reading this document in Word for iPad.

Still not going to subscribe, but now I think I will keep it around. I wonder if we'll ever know how many of the 12 million downloads will stay and how many of those will turn to subscription ones. But you've got to hand it to Microsoft: this is a nice piece of work.

Why 44%? It’s a funny discount to have but it’s a discount and it’s big, so as long as you are very speedy, go take a look:

Keyboard Maestro lets you automate huge long sequences of things that you do on your Mac all the time. I’d tell you more but I’ve never used it. Not even with all the recommendations I’ve heard and the fact that I used to be addicted to a thing called QuickKeys that did much the same thing. But with this sale, it costs £12.20 and it’s worth the punt.

So I’ve just bought it on this offer and I’ll let you know what I think of it in action. However, I found out about this from an email which insists the offer is valid for today only. When you go through the checkout it suggests there are (currently) six days remaining on the offer so either something’s wrong or, more likely, I’ve misunderstood something. Go take a look at it today, just in case.