Our car was filled to the brim, children and dogs and all. Halfway through the two-day trek to see family in Norway, my wife was at the wheel. I was fiddling around with my brand new iPhone, which truly seemed a magical product after years with Nokia and Sony Ericsson phones. The large touchscreen, the integrated GPS, and the 3G data connection made the phone a window to the world where data and the physical finally coexisted and interacted in a way that felt right to me. It was also a window into the behaviors of other people accessing this world.

Someone—I do not know who—had used Gowalla to tag this little island in the middle of the lake as a point of interest, and so the island became interesting to me. The chance meeting with this island, which existed to me only as a data point, has remained in my mind for years. What did the existence of the island, not as a physical place in the middle of a lake in Northern Sweden, but as a digital place discovered on my phone, really mean?

Well, it means this was surely written between 2007 and 2012 as that’s the lifespan of Gowalla. With that new iPhone reference too, you’re looking at 2007. But such is life, such is the way the web works, this is from The Atlantic which insists it was written this year.

So there are a couple of extra layers to this now. There’s the original point about mysterious points of interest on digital maps and the thought of who placed them there, why they did it and what the place means to them. But now there’s also what happened to this specific place and to all places that were marked on Gowalla and the answer seems to be that they have just gone. Vanished. (There’s a tiny bit about what was supposed to happen to the Gowalla data on Wikipedia. You can trust it about an online site.)

And there’s the business of when this was really written and posted. You may notice on The Blank Screen that every quote has its full first-publication date stated but there is an argument that you make your website seem fresher if you don’t.

I don’t agree with this. Certainly if your latest post is dated six months ago, you’re in trouble. But otherwise, I think you just cost readers some confusion. Most of the time I don’t care when something is written but there are moments when it becomes an issue. Such as here when we can just about place Finn Arne Jørgensen in his car in a certain point in time as well as a certain point in Norway.

Maybe he’s just a very slow writer. But he’s an interesting one. Take a look at the full piece. 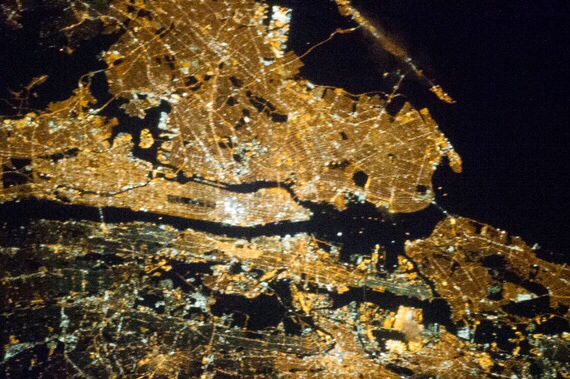 The Atlantic magazine has a new feature about collections of shots like these, including various official NASA ones but also photos shot by astronauts in space.

Just fascinates me and I wanted you to see it too.