You are reading the only sentence I may ever write about cars. That was it. Right there. You’re welcome to re-read it, but you’ve already got everything out of it about cars that I have ever or will know. It is for want of trying. But still, this fascinated me: new cars are being tested out in public and they are painted in the most astonishing crazy ways – in order to hide them: 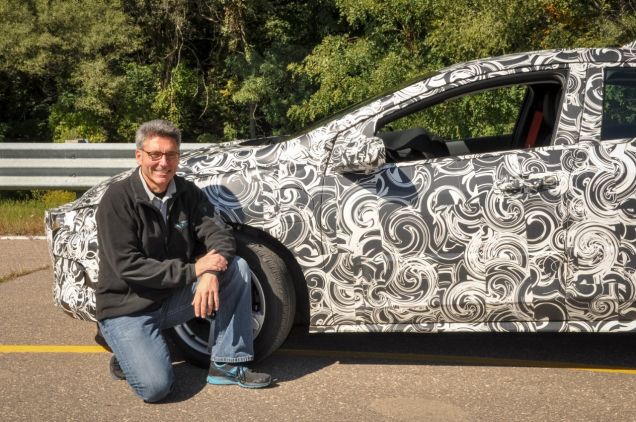 It seems that the adoption of “dazzle” to hide car designs coincided with the explosion of consumer cameras, and more so with the ubiquity of smartphones. GM told me that the practice began in the late 1980s, but didn’t really explode until the 1990s. “In recent years with the rise of smartphones and mobile internet devices, the vehicle camouflaging technique has really escalated to a technique used for the entire lineup,” the company’s reps added.

So, how does it work? Dazzle camouflage sounds oxymoronic: Why would you cover something you want to disguise with vivid, contrast-heavy patterns? It’s actually one of the primary concepts of camo, found both in nature and manmade systems. Think of a white tiger with black stripes. Those stripes run perpendicular to the line of the lion’s limbs, and in this way, they break up the continuous form of the animal itself. Along the same lines, Army camouflage is designed to break up the lines of soldiers’ arms and legs.

It’s a fascinating article that takes in the history of ships where camouflage was a bit more life-and-death than a car marker’s bottom line. Read the full piece.

On April 8, 2013, I received an envelope in the mail from a nonexistent return address in Toledo, Ohio. Inside was a blank thank-you note and an Ohio state driver’s license. The ID belonged to a 28-year-old man called Aaron Brown—6 feet tall and 160 pounds with a round face, scruffy brown hair, a thin beard, and green eyes. His most defining feature, however, was that he didn’t exist.

I know that because I created him.

How to Invent a Person Online – Is it possible to be truly anonymous in the digital world? – Curtis Wallenjul, The Atlantic (23 July 2014)

It’s like a modern Day of the Jackal. A riveting and just a little bit eye-popping account of creating a fictitious persona. Do read the full article.