That’s unexpected as in who ever goes to Evernote.com? Evernote is a service and a whole series of applications so no matter what your device, you can have an Evernote app on it. Write a note on your iPhone and it’s there on your Mac or on that PC in the library you’re passing, if you want it to be.

It used to feel as if the company did all these apps and somehow still expected that people would use its website first. They may have had a point all along. Local apps are handier because they’re quicker, in theory: you have all the Evernote gubbins with you so the only thing you’re downloading is your own note data. And often you have that note data right there on the device.

Yet I’ve been forced to use Evernote.com for the last few days while my iMac has been off being looked at and seen to. (Apple did a recall on certain models because of some hard drive problem. Mine qualified, I’ve let them take it away and tend to it.) I’ve been working on an old MacBook Pro and while for the most part it’s been fine, one area it’s fallen down on is Evernote.

I’m not sure why but I have the latest version of Evernote for Mac and it won’t load on this MacBook. Something somewhere is too old or too new, I don’t know which and I’ve not poked about under the hood. I needed a particular note and I needed it right then so when the Evernote app crashed, I just went to Evernote.com and got it from there.

I also got the hassle of having to log in to the site: not only do you need to log in – for which I use 1Password so that’s quite a simple and quick job that doesn’t involve me having to remember the actual password – but you also have to wait. Evernote texts you a six-digit number and if you don’t enter that correctly, something blows up somewhere.

It’s a good and secure feature, it’s a reason why you can read your Evernote notes on that passing library PC without being worried anyone else can. It’s also just a chore when you have to do it several times a day.

But I did it several times a day because I ended up staying in Evernote.com. And I stayed in it because it’s rather gorgeous. Here’s what it looks like on Evernote.com when you start to write a new note. 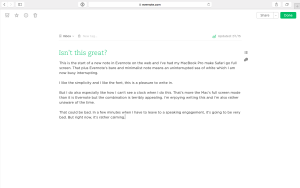 I used it out of necessity and yet now I just like using it.