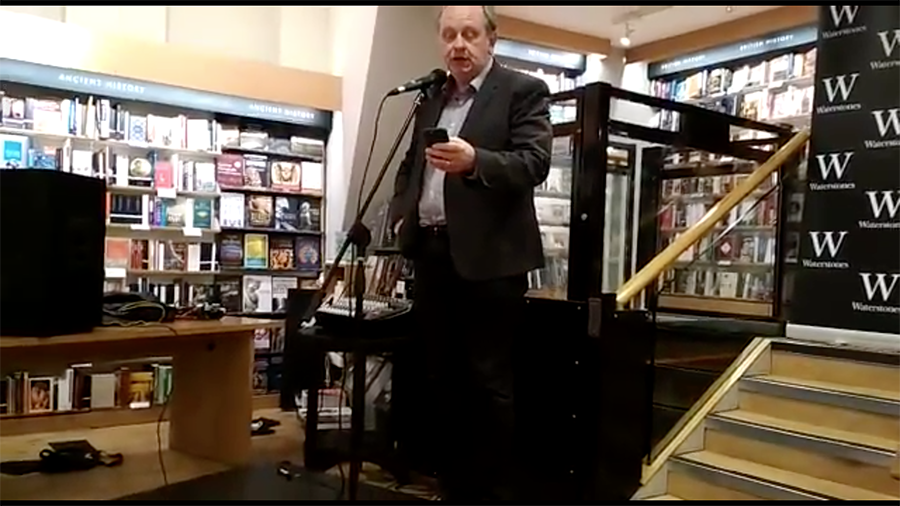 I’m truly not sure that I can convey to you what this week has meant to me, not least because a huge part of it is dizzying surprise. But here goes: last night I performed my poetry on stage for the first time.

It sounds straightforward when I say it like that and actually I’m conscious now that a real poet would’ve imbued the line with layers of meaning. You’d read their version of that line and not just comprehend that this was a life milestone for me, you’d also feel the tug in your heart that it was a milestone for you.

Poets do that and I can’t. All I can do is talk. Privately – no, now I think of it also quite publicly – I’ve been terrified of poetry. The power of it. There are poets who can make me weep on cue and that’s just evil.

I’ve been glad that at least I get this now, that while I came to it very late, I do at least read some poetry and I get this. I get to be made to weep, I get to have my heart tugged and my head wrenched.

But that’s different from writing the stuff.

Only, would I ask you to do something I can’t do myself? Of course I would. Consequently when I’ve run writing workshops that have been required to cover poetry, I’ve happily told you it’s beyond me and I’ve very happily learned from you.

Except a few weeks ago when poet Nyanda Foday conned me into writing a piece when myself and Maeve Clarke were running a summer school for Writing West Midlands.

Maeve Clarke is now the key part of that sentence.

For last night she produced the Birmingham heat of a poetry contest called Superstars of Slam and it was held at Waterstones. I went to support her and to just have a good time listening to the poets.

It turns out, though, that poetry contests will apparently often want what they call a sacrificial poet. This is a new term to me but then the term ‘poem’ isn’t exactly familiar yet, and Maeve had to explain. Judges will listen first to a poem that is not in the competition and to a poet who is not competing. It’s like warming them up. It’s like being the dull first questions in a lie-detector test, you know, where they are setting a baseline.

The judges assess this sacrificial poet and that’s the baseline for the night. Apparently it’s better than them judging the first real poet cold.

The only requirement to be a sacrificial poet, then, is to be a poet with a poem. One poem. Maeve knew I had one poem. She knew I’d written one at that summer school.

And she also knew that because I wrote it on my iPad, it would automatically be on the iPhone I was texting on when she called me over before the start.

I feel like I’m writing a Dear Diary entry here and I’m grateful that you’re putting up with me wibbling on, thank you. But I’d like to ask you to do one more thing: make sure I keep some perspective here.

I was not in competition last night. Having one poem does not make me a poet. And most of all, poetry evenings are supportive and welcoming and kind.

But this was a big thing for me, made possible both by Maeve and specifically by how she sprung it on me. I wish I’d shaved, but otherwise it was perfect: I had no time to get nervous.

Well, there was one moment. The three judges – Maeve Clarke, Giovanni Spoz Esposito and Afshan D’souza-Lodhi – had large laminated sheets with their scores on out of 10. Like Strictly Come Dancing paddles, but with less glitter. And as I looked over at them for approval, I saw all three sheets had the number 1.

I think it goes without saying that these were the worst scores of the evening but you didn’t have to bring that up.

Mind you, I don’t have to bring up this last point but I see no possible way for you to stop me. That dastardly Maeve who needed a poet and like the producer she is knew where to get one, also filmed my performance. It’s an entire 35 seconds long, which means I’ve now gabbled at you about something forty times longer than the something actually took.

I have no problem with that. You’d best avoid me for a while or I’ll tell you about it all over again.

Anyway. Here’s Palimpsest – about the type of ancient document where words are written over over over each other in layers because the paper was so scarce – as performed by me. Poet William Gallagher.

Maybe you can create a space, a place, a venue. I know you can build a building and I know you can run events but I’ve said before that you can’t just decide that this place will be special, that you can’t predict what venues will start to have a life of their own. But I could be wrong there because there’s a spot that has done this and not by accident. Last night I was at Waterstone’s bookshop in Birmingham and realised that it has genuinely become an arts venue.

This is mostly great but that thought last evening came in tandem with one that isn’t so good. This bookshop now has the same life and impact, it has become the same kind of hub for my working and social life, that the Library of Birmingham used to be. It knifes me saying that: I was so in love with that Library and it was so instantaneously important to the city, but then they halved its opening hours, cut its staff, immolated the place.

I had thought it remarkable that within weeks of it opening, so very many things I do revolved around the Library of Birmingham. I’ve spoken there, researched there, eaten there, had very many coffee meetings, it went from nothing to surely having always been there.

And now I pass it often and I regularly see tourists pulling on the door, perplexed why they can’t get in.

Across the city, there is this branch of Waterstone’s and over the years I’m sure I’ve bought many books there but to me it’s always just been where the old Times Furnishing building used to be. I can’t conceive how long ago that store closed and I refuse to look into it for fear of how old I’ll feel, but I walk into Waterstone’s and somehow I can still see the old store. The bookshop is all light and welcoming and I remember the furniture shop being dark, but the walls are where they were, the distinctive steps up to each floor are where they were.

This Waterstone’s was refurbished and reopened last November and earlier this year I went to pitch a vague event idea to the manager, Stuart Bartholomew. By the time it became less vague, by the time it became a poetry and prose event I performed at and co-produced with Charlie Jordan, it became a fair miracle that we could even be fitted in. This store runs events constantly. Take a look at the current schedule on its official website.

I can speak as someone who’s run one of these events: it buzzed, it was a success, there was great wine and chocolate. There was also Grace, who manages the events and didn’t criticise my shoving aside anyone who stood between me and that chocolate, yet whose surname I clearly didn’t bother to learn. Well.

But I can more speak as an attendee. I’ve been to talks there, I’ve been to see authors talking about their new books and last night I was at the launch of the Birmingham Literature Festival. The event is in October but the programme was revealed last night and you can now buy tickets. Perhaps ironically, I don’t think any of its events will be at Waterstone’s and I know very many will be at the Library of Birmingham. But Waterstone’s is running pop-up bookstalls at the Festival and last night it hosted the launch.

I am doing bits in the Festival but last night I was watching so many happy people near chocolate. I had to skip out early, I’m in London today running a workshop, and do you know it felt wrong leaving? Going from the verve and life of this event to a deeply long and boring train ride and a midnight slump into a Travelodge. Just wrong.

This bookshop is an important part of Birmingham’s literature, writing, arts and poetry scene. It’s become so in less than a year. I think it’s obvious that this is a direct result of the effort of Stuart, Grace and the rest of the staff but this is becoming an advert so I’ll just say that really it’s down to the chocolate.