Earlier this week I needed to get a photograph of a keyboard for a colleague on a project. Easy, I said, do you want a shot of the two I carry in my bag or of the three on my desk?

Easy, they said right back, you’re scaring us now and we’re just going to be over here, phoning other writers and a few medical experts. 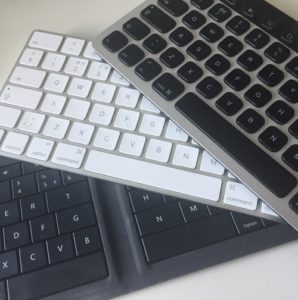 Look, I can make my keyboard obsession seem perfectly normal and healthy if you’ll just let me tell you two things. One is that, excuse me, plenty of writers through the years have fixated on their 2B pencils or expensive fountain pens, I’m just ahead of the technology curve.

Okay. That didn’t work. Fine. This will. I can make the keyboard stuff seem perfectly sensible by blowing it out of the water with something worse.

For by coincidence, someone else asked me two days ago what I write in. I like her so I should’ve just said “English” rather than being boring for an hour but, pretend to be shocked, I chose the boring option. For an hour I answered that I write in Microsoft Word. And Apple Pages. Scrivener. Ulysses, Final Draft. Evernote. Apple Notes. Drafts 4. OmniOutliner. DEVONthink.

I’ve weaned myself off also using Simplenote. I never quite got into Bear Notes, Typed, Vesper, BBEdit, MarsEdit or the various flavours of WordPress but there’s still time. Ooooh, also Slack.

What I don’t understand is how I use all of these apps every day and for whatever it is that I’m writing. Without thinking, I automatically know which one I’m going to work in. That’s a bit bleedin’ obvious when I’m writing scripts because that’s what Final Draft is for – except, mind you, Scrivener is good for scriptwriting and some places I write for are less fussed about formatting and more fussed that you must deliver in Word.

So, yeah, occasionally I can’t find a piece of work because I don’t remember which app I wrote it in, but that’s just normal, everyday sane first-world problems.

What I very much don’t understand, though, is how writing can physically feel so different in each of these apps, on each of my dozen current projects. In every case I’m typing on the same keyboards into the same machines, iPad, iPhone and Mac, but they feel different. Seriously. Also, when I’ve been writing in Ulysses for iPad using an external keyboard and then go to use Scrivener for Mac with a very similar external keyboard, my fingers react differently.

A pianist I know says she finds the same thing when she goes between a Church organ and a regular piano.

I can understand that for her yet can’t explain that great difference I find where there surely can’t be any. It’s as well that I’m not fussed about justifying it as I can’t. And you may have been looking at me funny for the last couple of minutes but I’ve been thinking about this stuff for years.

Which is why there is one thing that I do understand about my fussing over keyboards and about my constant search for the next thing to write in.

It’s because that’s a damn sight easier than searching for the next thing to write.

That’s what I should’ve told my what-do-you-write-in friend: I write in the tiny amounts of time between my having been able to successfully distract myself.

She was asking, incidentally, because she’s been using Word and knows there are alternatives. I showed her all the ones on the iPad I had with her and some appealed, some didn’t, but we talked about what she wanted and ended up agreeing that Word is fine for her. It’s fine enough and she knows it well so she’ll stick with that.

So apparently I can cut through the crap when it’s someone else’s writing, I can see clearly what they need and how they’re just postponing writing. I can see that just making any decision about an app or a keyboard is better for everybody.

Except me. I’ll definitely crack on with this collection of Time stories I’m writing, though I’ll just wait until the new update to OmniOutliner for iPad is out. 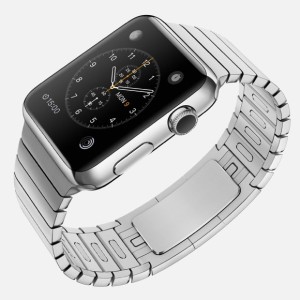 This is going to take a time to get to its point, sorry. But Apple released details of its new Watch this week and a certain segment of the world has fallen apart.

I was just disappointed – not surprised, to be fair – but disappointed at some of the reactions. I’ve nothing to do with Apple, they didn’t ask my advice on anything, but still I was disappointed because in many ways and at many times I’ve been a professional reactor. I’ve been a critic, I am now again writing software reviews. So I can’t help looking at critics with one eye on what they’re doing and one eye on whether I’m doing it too.

Here’s a criticism of Apple: one version of the Apple Watch costs £8,000 ($10,000). To me that’s one fact with an implicit second one – that I will never be able to afford that version – and this is all. Nothing else. I can’t extrapolate from that anything but that it’s a lot of money that I neither can or want to spend on a watch.

But to some critics this is ostensibly the end of Apple’s ambition to be “for the rest of us”. That’s it, Apple is cashing in, Apple is just out to make money, it is the end of days.

There is that word ‘ostensibly”, though. It is a fact that articles slamming Apple get more readers than ones praising it. Most people wouldn’t bother reading either, but if you’re an Apple hater then you enjoy the criticism. If you’re an Apple fan, you rather enjoy riffing on how pathetic the criticism is.

So I look at these criticism and I can’t tell whether they are genuine or just after getting some more readers. If it’s the latter then what can you do, haters gotta type.

But that does niggle at me. Professionally, I’m twitching at the thought of writing something whose sole purpose and existence is to get people to read it. Personally, I’ve realised that these criticisms have an impact.

Follow. I was on the MacNN podcast this week when Malcolm Owen talked about various Android phones that have been announced. He was quite dismissive of them and I asked about one Android feature that I think sounds really good: the way that if you put your phone face down on a desk, it mutes. Goes into Airplane Mode. Whatever the Android term is for not interrupting you while you’re working. I like that and, okay, I accept that a feature touted as being on Android first usually means it’s on one Android phone somewhere in the world first.

It’s on Malcolm’s phone and he says nope, he only ever got it to work once.

The hype of an Android feature had convinced me this was useful and I unthinkingly, certainly naively, assumed that it worked. Silly me.

So doubtlessly there are people out in the world reading and hearing criticisms of the Apple Watch and consciously or unconsciously making a decision about it. If all you hear is that it costs £8,000, you’re not going to consider buying one even though the real price is £299. That’s 26 times lower, by the way.

Now, someone buying or not buying an Apple Watch isn’t significant. They might love it if only they’d bought it; they might buy it and hate it. It’s just that seeing everything through the lens of perhaps self-serving criticism and being quick to diss before hearing anything substantial is so familiar to a writer. We have to be hard as writers and we are, it’s just that the thickness of our skin only protects us, it does not protect the work.

A piece of mine got a lot of criticism last year, criticism that – hand on heart – was in part so asinine that I had to bury a laugh. (“It should be a supernatural novel, I like supernatural novels.”) I went in to that session ready for a promised skin-tearing time and didn’t get it. Yet I haven’t written one word more of that book since. The criticism didn’t affect me, the critics didn’t affect me, but something affected that novel.

Nobody is ever going to get more readers because they’re criticising me but that doesn’t mean there aren’t other issues at play. The need to be heard, an inability to not say anything because you’ve got nothing to say. The expression of your own issues instead of anything to do with the book, the presumptions that one’s own preoccupations are correct and vital and important.

In that group, there was someone who’s set a novel in some particular area of London I’d never heard of. We weren’t in London, I’m not from the city and it’s not like the area was Westminster. I got the most deeply pitying look for asking where it was. The look was: you should know this, you aren’t a real writer, are you?

Apple will keep on making that Watch unless the real thing, the actual physical product in people’s hands, proves to be a failure. It won’t stop because someone thinks it should run UNIX or needs to be set in a particularly obscure part of London.

Whatever you’re writing, write the damn thing and bollocks to anyone else. Get it done.