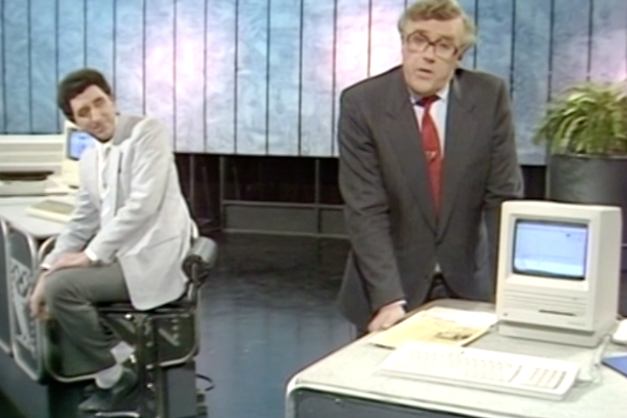 I may be overstating this. The first time you could ever have heard something I wrote be broadcast was 14 March 1987 on BBC2. It was in an episode of a show called Micro Live which was part of the BBC’s Computer Literacy Project. I am not credited, but as it was live I can also know precisely where I was on that day from 18:25-18:55 or so. BBC Television Centre, which I wouldn’t come to think of as home until just shy of a decade later.

Micro Live that week featured the then-new idea of desktop publishing and at the time I was working for a firm that made one of these DTP systems. You’ve never heard of it. I’ve just sat here for twenty minutes trying to remember it. The world was not shaken by this firm, let’s leave it there.

Whereas it was shaken, according to Micro Live, by Apple. It’s weird now to see that episode and how it would’ve been the first time I’d ever come across a Mac. If one could only realise how integral to your work a box in the corner could become.

As for the other box in the corner, the television, well, I think I’ve left you waiting long enough. I can quote to you my entire contribution to that episode because it is just about exactly half a sentence long. Presenter Ian McNaught-Davis was supposed to say that Apple was the first computer company in publishing and no, excuse me, it wasn’t.

Everything he was going to say about what Apple actually did was true but it was far from accurate to say they were the first.

So now if you should manage to track down an obscure TV show from 31 years ago, you would be able to see and hear McNaught-Davis instead begin his speech with the words: “Of course there were computers in publishing before, but…”

What are the odds that you’d ever be able to check this? Remarkably high, as it happens, because it only requires you to click a couple of times.

For this week the BBC released every episode of Micro Live and all the other shows in the Computer Literacy project online. Every minute of it. Here’s my episode.

Excuse me while I remember being very young and rather nervous but adamant that the script be accurate. Not everything changes, then.