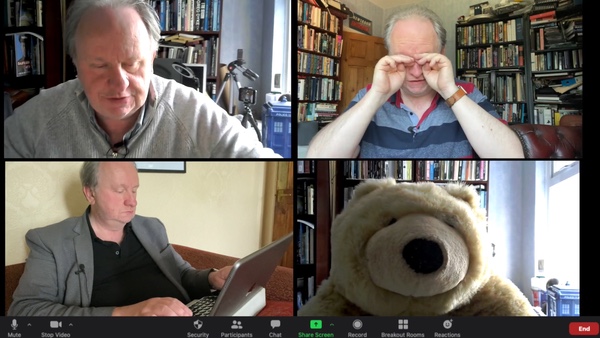 Oh, go on, let me do this. I had a Serious Writing Topic that I wanted to discuss with you, but it is you, it’s just me and you, let me tell you something else that I think you’ll recognise. It’s the way that you get an idea you think is good but actually you have no idea how much work it is going to take you.

I have a YouTube series called 58keys, it’s about 30+ videos so far and all for writers who use Macs, iPhones and iPads. Fine: I like doing it very much, I’m getting gorgeous reactions, all is ace. Except a week or two ago, I had an episode ready to go and decided to pull it.

There was nothing wrong with the episode but I’d made it especially to be relevant to people who listen to a podcast called The Omni Show. That’s a surprisingly happy little show about the company that makes various particularly great software tools that I rely on daily. Hourly. They invited me on and after the recording, I made this 58keys episode about the especially particularly great To Do app OmniFocus.

Only, their interview with me didn’t air when I expected. It has now aired and you can hear it and it was a lot of fun, but it didn’t come out on the day I thought it might. So I decided to hold off on the relevant 58keys episode. You’d have done the same, I know you’d have done it and found that so obvious that you might even have bothered to complete the thought, you’d just do it.

But this meant I had no 58keys episode.

With 90 minutes –– honestly, I think it came in at 89 minutes –– I had thought of a new episode, written it, filmed it, edited it and uploaded it to YouTube ready to go. That was a nice feeling, that rush of creativity, and that episode did very well for me.

But no good idea goes unpunished. I ran that episode, then the next week when The Omni Show was out, I ran my OmniFocus episode –– and realised that I really, really had to have a second one about that software. It’s that useful, there is that much to say. And this is where I got the idea that I have since spent thirty hours on. That’s thirty hours. Twenty times longer than the previous one took.

I don’t think you do or should care how long I spend on anything, just as I don’t think either of us should especially care how long any piece of work too, how much effort it did or didn’t take. The end result is all that matters and actually I am now very pleased with it.

This 58keys about a software app that you may not be using, may never have heard of since the last time we had coffee and you foolishly asked me what I was up to, certainly had the potential to be dull. It also needed to be quite long in order to cover everything. Long and dull. For some reason I didn’t fancy long and dull.

So I did what any drama fan would. I turned it into a fight.

If you watch, you’ll see a four-way Zoom conversation with three of me visibly not liking each other, and a bear just staring at all of us. This might be something I should say to a therapist before I admit it to you, but I appear to really, really like arguing with myself like this, I deeply like disliking myself. Plus I got to do it in a form that was half Zoom, half more like a certain TV thriller.

There you go. Instead of long and dull, I made a thriller. Or at least I tried to: you’ll have to judge it.

I hope you enjoy it, I know you would’ve done it differently and that this could very well have meant you did it better, but you also recognise this part. Once I had the idea, I was committed. Ten hours in, twenty, I might dislike the idea and I might have gone off the jokes that I’d now heard six times, but I was committed. When I realised I’d made a small mistake and needed to entirely reshoot a whole segment, I could’ve held back a little tear, but I could not stop myself getting out the camera and the tripod again.

Because we do. I was working with 20 or so writers, musicians, journalists and actors earlier this week and we might have all wished for the regular salary of a regular job, but we all knew exactly like you do that it takes unreasonable, unjustifiable, uneconomic effort to pull off an idea.

And you also know how I’m feeling right now. I’m a bit conscious of some other pixels I would like to change now that I’ve seen it all on my living room TV set, but I’m also deeply glad that I did it. Deeply glad that I got a laugh from Angela at just the right place.

And somewhat less glad that I now have to think of something to film for next week’s episode.