As a scriptwriter, I like that because I think the bellowing and the pontificating and all that should be in the dialogue itself. Let the character speak that way, don’t point at their lines and tell me how I should hear it.

But when pressed on this point in workshops or wherever, I cannot help myself. I always – I’m irritated at me even writing this – I always say that you’re only allowed to use “he said, she said, it growled”.

Now, for one thing, I loathe that I say all that because as you know, there are no rules in writing. Although if you break them…

I also loathe it because it’s a joke based on something so few people can know that it’s impossible to really call it a joke.

You have to know the Target novelisations of Doctor Who.

The thing is, even if there aren’t really that many of us who do, if you’re one of us, you know those books extraordinarily well.

The most prolific writer of the range, Terrance Dicks, died this week and it came as a huge jolt to me. He was 84, I’ve never met him, and yet my head jerked back when I read the news.

And then this happened. Since he wrote something like 60 of these novelisations of old Doctor Who stories, naturally a lot of the covers were being shown on Twitter and Facebook and the rest.

It didn’t happen with all of them, but there are certain covers of his books where I would see the image on screen but I would feel the book in my hand. The weight, the heft, the shape, the texture. I’d feel the book and I’d even feel just an echo of the excitement.

Truly, this little book range had electricity in it. In the late 1970s and early 1980s, you never knew which Doctor Who story was going to be novelised and you didn’t know when. I remember so clearly being on holiday with my family and phoning a friend to ask if a new one was out and, if so, what it was.

It was Death to the Daleks, by Terrence Dicks. Published 20 July 1978. 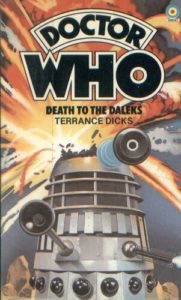 That’s the thing with Doctor Who, if you can remember even a scintilla about anything to do with it, you can find the full details online. So I didn’t remember the date, didn’t even remember the year, but I remember the sunshine and the phone call and the book when I got home.

I also remember thinking that Doctor Who books, at the time, and in so many cases, were the scripts to the TV show with he said, she said, it growled added in. And that was unfair. It wasn’t always unreasonable –– there’s a ten-part, roughly five-hour Doctor Who story called The War Games whose novelisation is a pamphlet –– but it was unfair.

I know this because since Dicks died, I’ve re-read three of his Doctor Who novels. They’re not exactly long, they’re not exactly hard reading, but I started from nostalgia and I carried on because I was enjoying them.

This would be a good point to say, as so very many other people can and have, that it was these Doctor Who novels that made me a writer. It wasn’t. I’m a writer because of Lou Grant. But there’s no question that they helped.

There’s also no question that they belong to a long ago era. Target Doctor Who books were published when there was no possible way to see a Doctor Who story that aired last week, let alone across the show’s 50-odd years. They were Doctor Who for us, and there is an innocence to that whose loss is hanging a little heavier this week since Terrence Dicks died.