I’m not sure you need to know this but I need to tell you. I realised recently, and instantly mentioned to you, that writing is an illness. But if it is, then you’re supposed to catch the bug from Shakespeare or Larkin or Dickinson or Dickens.

I got it from Gene Reynolds, Leon Tokatyan, April Smith, Robert Schlitt, Michelle Gallery, Seth Freeman, Allan Burns and James L Brooks. You may not know the names but not one of them knows mine either.

April Smith is now a crime novelist and we exchanged emails a few years ago. So at one point, yes, one of those names had heard of me but by now she’ll have forgotten. So it stands: not one of those people knows a pixel about me and yet, in combination, they got me writing.

Because they made Lou Grant. They wrote and produced my favourite show. It’s a funny thing but today the show isn’t well known at all yet when it was cancelled, there was controversy. I mean, controversy. There was a march. People marched on the studio demanding its return. I’ve seen photos.

Its cancellation was so controversial that its star Ed Asner was blamed – he’d become a political and union figure in real life – and its star Ed Asner paid the price of not working for years afterwards. How much of that was politics, how much of it was that he was so well known in this one role that it was hard to see him in another, I don’t know.

Lou Grant was a journalism drama and I became a journalist, but that’s not how it worked. I didn’t become a journalist because of this show, I became a writer. Because it was the first time I’d watched a TV show and become conscious that it was a crafted piece of work. That effort and skill and talent had gone into it. That it mattered. It wasn’t just an hour’s entertainment to half-watch at the end of the day, it was an hour’s drama that took work to make.

From that moment on, the one-hour TV drama became to me what the three-minute pop song is to so many others. I love the form and its constraints and what can be done, what is done, in that time. That shrinking time: Lou Grant’s ‘one-hour’ episodes run 50 or even 52 minutes where something like today’s Leverage ‘one-hour’ is 43.

I also got into the history of this dramatic form and Lou Grant is special there too: it was the first and to this day remains the only hour drama to have come out of a half-hour sitcom. If that doesn’t sound like a big deal, think about it again: a supporting character in the comedy The Mary Tyler Moore Show became the lead in a drama. Look at how the character of Lewis changed when he was promoted to the lead of his own show after Morse changed and he was staying in drama. Look at how Frasier Crane changed when he went from Cheers to his own show Frasier – and he was staying in comedy.

Lou Grant and the actor Ed Asner had to change and to bring us along from a four-camera brightly-lit sitcom which, as very good as it was, had its chief aim of being to make you laugh at least twice a minute for half an hour. And we had to be brought to the same character now in a very naturalistic, single-camera one-hour drama that intended – and succeeded – in exploring serious areas. Very serious areas. They seemed easier to me because I’m in the UK and they were primarily American issues so I didn’t have the context and the grounding that its main intended audience had, but they had it.

As a writer looking back at it now, I can see that I was fascinated by how little happens. It’s a bit Alan Plater-like in that respect because despite being a 1970s/80s primetime US hit, every episode really boils down to people in rooms talking. It was a technically very clever show in how it managed to keep finding new and seemingly fresh ways to have a reporter interview someone in a room but more than that, it made you forget that this is all you were getting.

I love the Before trilogy (Before Sunrise, Before Sunset, Before Midnight) and actor/writer Julie Delpy has said in interviews that the hardest thing about the talky scenes in that is to make them be dramatic enough to not be boring yet not so dramatic that they are unrealistic. Lou Grant did this all the time.

It was also an ensemble piece with many major characters all able to lead an episode. It did that before Hill Street Blues – which was made by the same company – and it even did Hill Street’s trademark handheld camerawork. It only did that for one episode but it was deeply more effective, I think, for that: we were so used to the smooth and fluid dolly-track-driven camerawork of most episodes that to see one done handheld was jolting.

It got me into technology, too, as video had just come out and I was watching those episodes on VHS over and over. Lou Grant was supremely fortunate to be about the newspaper industry just as it was going through what then seemed its big change. It’s gone through the internet since but in the 1970s and 1980s, we would see scenes in Compositing: a huge room where strips of paper were physically cut and pasted together. No Cmd-C, Cmd-V, actual scissors and actual glue. And then we’d see how quickly and radically that changed as the fictional Los Angeles Tribune newspaper switched to computers.

Oh, and the show got me into soundtrack music too because Patrick Williams’s theme was re-recorded each season and I noticed it because I’d know the previous run’s tune so well.

So maybe it’s no wonder when I first went to Los Angeles, about ten years ago now, I got to see the Gene Reynolds Collection at UCLA. The scripts for that show I loved so much, the production memoes, the day to day makings of it. Heaven. I also went down the road to the real-life Los Angeles Times and got a smidgeon’s worth of work out of them. The Times wasn’t the inspiration for the more rundown Trib but it was a huge resource and it was a big presence in the show because the real paper was presented as the fictional one’s rival.

I tell you this now because I’ve just been back to Los Angeles. I didn’t get any work, I didn’t look for any work – I brought work with me, let’s not be daft – but this was a holiday. And still I had to go to Pershing Square. 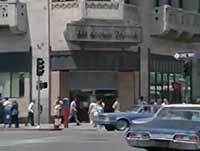 Lou Grant was filmed over at CBS Studios, that’s where people marched in the early 1980s, but the exterior of the Trib was filmed at Pershing Square. It’s actually an ordinary office block and they popped a Trib sign over one for a pharmacy on the corner, but that’s the building that sticks in my mind all these years.

And it’s the building I had to go to. I said so many people have their three-minute pop song obsession and I have my one-hour television one. They have their Abbey Road, I have my Pershing Square.

And here I am, pointing at the real place and its fifth floor, where the Trib’s City Room was supposedly set and where I spent my formative television-viewing years. 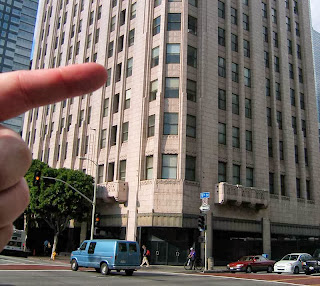 I’d love for you to see the show. It’s not available on DVD but you can get the first three seasons on iTunes and also there are many episodes lurking on YouTube. Try this very early one called Nazi.
I hope you like it and that you watch the other 113-odd. And that next time you’re in Los Angeles, you can be sitting in a hotel in Long Beach watching an old episode on your iPhone that happens to be set… in Long Beach.

There. Had to tell you all that. How have you been?