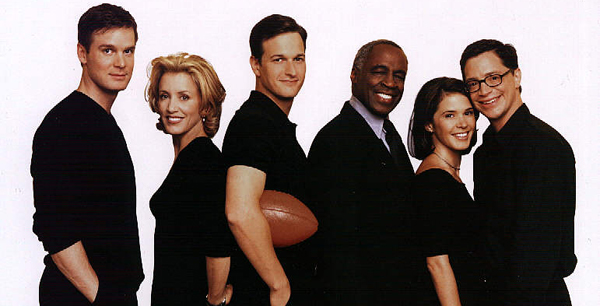 Please stop me. If Angela asks me when dinner will be ready and it’s almost done, I will call out something like “Two minutes back”. It’s a quote. I’m quoting. While I’m cooking.

I say cooking, it’s usually more heating and stirring and microwaving, but that’s not the point. The point is that my everyday conversation is riddled with quotes that nobody knows, at least until Angela happens upon some film or TV show that I got it from.

For it all comes from TV, radio and film. Imagine if I’d read the classics when I was younger. I might’ve become a weather bore every time the wind was in the east but at least that allusion could sometimes make sense. “Two minutes back” never does. Back to what?

It’s from Sports Night. I have no measurable interest, knowledge, experience or even really awareness of sport, but this show that first aired 20 years ago is a favourite. Imagine Aaron Sorkin’s The West Wing done as a half-hour comedy and set behind the scenes of a TV sports show. This should be easy to imagine because that’s exactly what this is.

Take a look at this example. It’s the opening few minutes of an episode and I guarantee that you’ll wish it were the whole thing.

I should say right now that you can see a lot on YouTube but the only place to get the show itself is on DVD. Well, if you’re in the US you can stream it on Netflix or buy it on iTunes.

Or come round to my place.

I do relish its moments when characters will be in a heated argument and then, because the TV show’s cameras are now live, will be smiling, happy hosts until the commercial break and wallop, right back at it. I don’t know why I relish that so much, except that it’s a heightened dramatic situation that’s also real. I’ve done that, to a vastly smaller extent, in radio, and that turn-on-a-second move from personal to professional, that mental juggling of conflicting demands on your head, it’s gorgeous.

It also forces arguments into bite-sized chunks which is fantastic because drama does that anyway and here the need to stop and start is imposed, it’s an external pressure and you can feel the frustration. You can feel how when it’s released, when they’ve gone to commercial and can speak freely, that the next part of the row burns out of them. Plus even as they’ve been professional and talking on air about some sports thing I’ll never comprehend, you know the real drama has been continuing in their heads so when they can speak freely, the argument has moved on.

That’s an amazing thing to me. It means the Sports Night scripts pummel through arguments and issues at an incredibly artificial rate yet specifically because of the context, it feels natural and uncontrived. It feels real.

This is a comedy I’m talking about and I actually hesitated calling it that because for me, it’s drama. There is a very quiet laugh track in the early episodes, the result of the producers not wanting one and the network insisting and presumably some editor accidentally leaning on the volume control to minimise it. And it is also very, very, very funny.

Yet it’s the drama that keeps me coming back to this show – and I do keep coming back. I can visibly see me putting the DVD boxset in my car boot after having had to pay a gigantic import duty to the post office and saying aloud “I hope you’re worth it”. That must’ve been around 2001 or 2002 and it was. It is.

This show about the making of a sports show runs for 45 episodes of around 22 minutes apiece. What’s that? Something like 16 and a half hours of television. I watched the first one that weekend I got the DVD – and then I watched the following 44 before Monday.

I’ve done that binge about four times since.

And I’m in the middle of another one now. It’s been years since my DVD player was even connected to my TV set but I found a way to stream any video from my Mac to my TV set so I was looking through my shiny discs for what I’d want to see. I only meant to watch one episode of Sports Night. That was Tuesday. It’s now Friday and I’ve seen 15 episodes. Again.

This is a series about the making of a show and much of it takes place during the time that fictitious sports programme is on air. It has an awful lot of commercials. And every time this show-within-a-show cuts to a commercial, a character in its gallery will announce how long they’ve got before they come back from commercial.

Ask me how long before I watch the next episode.