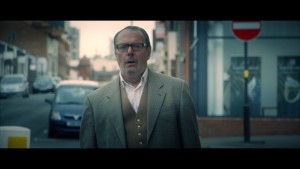 Taking Time is a short film produced by Ian Kennedy, directed by Gabe Crozier and starring Denny Hodge. It was written by Ian Kennedy, Andy Conway, Liz John, Mark Brendan, Nicola Jones and me, William Gallagher. I am unquestionably the smallest part of that list but it’s a big deal to me.

Well, I hope so. For some reason I can’t remember the first time I was on radio. That startles me: I could make a good guess: it would be on BHBN, the Birmingham Hospital Broadcasting Network – hospital radio that at the time went out to twenty hospitals in the region – and possibly followed quite soon by BBC Radio WM. But I don’t know, can’t remember.

I’ll worry about that later. For now, I am just enjoying that I have a film out. Okay, it was premiered this week and it’s next showings will be in film festivals so I can’t yet point you to a screening time. And it’s not my film, I am that tiny cog.

I’m talking to you, I’m not writing a press release, so this is how it is: it is my movie. I wrote a film. It premiered this week.

You can read more about it on the Screenwriters’ Forum website where you’ll also find out about the Forum’s new script development workshops. That’s another excellent thing that Forum chair Ian Kennedy has introduced.

That’s a thought. You’re nice so you’re thinking I’m being modest about my contribution but no, I’m a cog. And here’s an example for you of where credit should really go. I used to be the chair of the Screenwriters’ Forum and in my last meeting I think I had about six members turn up plus we ran out of apple juice.

For new chair Ian Kennedy’s latest meeting, he had a full-house cinema audience and a movie with the whole thing covered by BBC Midlands Today.

But it’s still my film, right?