Last week I had a lifetime ambition fulfilled when drama I wrote was aired on BBC Radio. What I didn’t realise when I told you this was that there was a second ambition fulfilled – and that it throws me back to an ambition I had in the 1990s.

Specifically this. I can picture myself walking down a street reading the latest issue of Radio Times which had The Simpsons on the cover and a feature on the inside about the new RT website. I was deeply, gratingly self-kickingly disappointed: given what I knew and what I was doing, that was the website I should’ve been working on and I’d missed it. That was 1996 and as it happens, the website missed its launch date by a week. The things you remember, eh?

Within a year, I think, certainly not much more than that, I was working on that website. That meant working with the website team but also with the magazine: I can very clearly picture the first editorial meeting I sat in. It was in a boardroom that no longer exists – wait, I worked in BBC Pebble Mill and they knocked it down, I worked in BBC Television Centre and they knocked it down. This was BBC Woodlands and it was demolished years ago.

I’m not going to think about that. Woodlands was the one that deserved to be demolished. Leave it at that. But before the wrecking balls came, there were these regular meetings in a board room that had glass cabinets holding all of Radio Times. All of it. Bound copies going back to 1923. It was a marvellous little meeting room. Not an exciting one really, have a look for yourself. 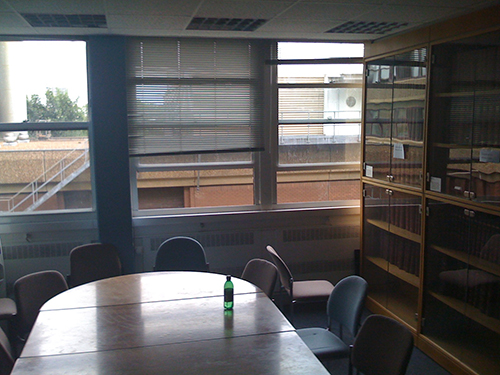 I have no idea whose water bottle that is. Looks far too healthy to be mine. And the room looks small and dark. But then it was. Nothing special, except for that collection which extends past the camera to maybe six or seven cases, and for the people who’d meet in there. I thought I knew my television drama but, whoa, I had no candles to hold next to this lot.

As part of the work I did get to write bits that went in the magazine, the odd line, I can’t even remember what but nothing that earned me a byline. Until the issue of 25 September – 1 October 1999. I’d written a short piece about websites or something and I can remember sitting on a coach in Victoria Station when I got the call. My then website editor Rebecca phoned to tell me I was getting a byline. She knew how important this was to me.

Still is. I can tell you that date because I have the issue still, sixteen years later. I just turned around at my desk and took it off the shelf to check. That was the first time my name was in Radio Times and it wasn’t the last. Far from it. My most recent was about two weeks ago, I think, so all these years on I still get in there. I’ve been trying to work it out and I can account for at least a thousand bylines over those years.

Lots of things I’m proud to have written, many things that were just ordinary, pedestrian, required-but-not-special, and a few things I’d like to rewrite now.

I just have to say that I’ve got a bit used to having bylines in this magazine, I am used to seeing my name there. Until last week.

Last week it was an enormous, enormous jolt seeing my name. Because for the first time, my name wasn’t next to a Radio Times article I’d written, it was in the description of a programme in the magazine’s listings pages. Doctor Who: Doing Time got a little paragraph in the radio pages and there I am.

I didn’t expect that. As comprehensive as Radio Times is – show me any other magazine that covers all these channels in such detail, especially the radio ones – my Doctor Who was airing on a digital-only station. I didn’t think about it but if I had done, I’d have reckoned the listing would read “18:00 Doctor Who” and that would be that. Instead, I got that full paragraph.

Alan Plater once said in an interview that it was a big moment getting his name in Radio Times. He said it was a big psychological moment for all writers, it meant something. All these years later, and in a rather smaller way than Alan ever did, I got listed in RT for my drama and yes. It means something big to me.

So does this. The magazine is of course very pressed for space but they chose to give room for this listing and they chose to because it was me. I emailed to say how gigantic a moment this was for me and they wrote back saying they’d been thrilled I had a radio drama on. Laurence Joyce, David Oppedisano and Jane Anderson. They told me this and I put my hand to my chest. So touched.