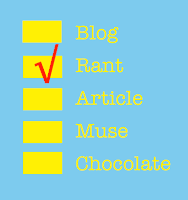 I suppose that in one sense it all worked out very well indeed: I’m not a Ridley Scott fan. But this concept of slotting in new beginnings and new endings, it’s just wrong.

Periodically someone will announce a new drama where the audience votes for the ending. Similarly, you do still get some books that say “if you want to kill the monster, turn to page 94; to eat a nice supper with the monster and reminisce about old times, turn to page 17” but they are dying out faster than normal books.

There’s a reason for this.

Giving the audience a choice of endings or requiring them to make their own way through your story is bollocks.

If you want alternative endings to work, click here.

If you want them to never be attempted again, please God, then click here.

If you’re undecided or only halfway through your biscuit, read on.

Each click, each jump to page 94, each voting breaks the story: it takes you out of it and needs you to make a decision before then plunging back in. It is very, very hard to get anyone into any story so deliberately throwing them out and hoping they’ll come back is on the doomed side of foolish.

But my aggravation and my conviction that this is an impossible concept is because that stopping is as permanently disruptive and damaging for the writer. Now, the writer is paid to get back in there but the fact that they have to means to me that the story is shot through with bullet holes. If you’re not scooped up and carried along by the story and neither is the writer, there just is no story.

There are also no characters.

Follow. Let’s say that there’s been a murder, that I’m a rogueishly handsome detective, you are a suspect and let’s say that bit about me again because I liked it. Let’s say that this actual proper drama that in every way bar the aforementioned hunky me is in fact Columbo.Right from the top the watching audience knows whodunnit and right from about twenty minutes in, Columbo suspects whodunnit. For the next seventy to ninety minutes, it’s you and me. Toe to toe. Question to answer. Accusation to alibi. Move to counter move. You have to be a hell of a great character to keep us for the whole show.

We’re now in Murder Most Randomly Selected. Britain’s Got Murderers. The X Ending.

There’s still been a dramatic murder. I am still good-looking. You are still a suspect. But now you are one of five suspects and not only could any of them have done it, every single one of them has done it –in one of the five alternative endings.

The murderer is instantaneously one fifth as interesting a character. They get less time on screen so they need less character so they have less character. Each of the five has to have all the setup to explain how – only cursorily why but always in detail how – they did the deed. So the murderer has one fifth of the plot too.

I think it’s even less than that, though. If anyone can have done the murder, anyone did and it doesn’t really matter. It’s just a puzzle to solve – where any answer is as good as any other.

Stories are not puzzles. They are not games. They can be both, they can be either, but if that’s all they are then they are not stories. Stories are about characters and if a character has one fifth as good a motive for killing as they should or murder – surely the most profoundly dramatic moment in their life – is instead just any old five to one shot, it’s not a story.

If it’s hard to get an audience into a story and it’s arithmetically harder to keep them there, then it is geometrically harder to create compelling or even just interesting characters. Anyone who believes one-fifth of a character is good enough is someone who can’t create full characters.

Two very good films would seem to give the lie to this, but hang on. Raiders of the Lost Ark was actually a series of terrific ideas for set-piece moments all strung together. The Bourne Identity had an alternative start and ending filmed.

But a writer strung those Raiders ideas together and the writer, director and producers planned and ultimately decided against the alternative Bourne.

It wasn’t the audience voting in the cinema to say they want the bit with the rolling boulder next, please.

You don’t have to like the choices the writer made but if they want the audience to make up the story they should hire them.

Not that I feel strongly about this, by the way.

93 thoughts on “Choose your own ending”