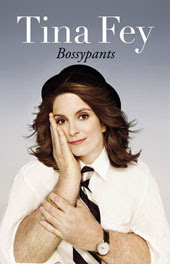 I have never reviewed a book here before and I do not do it now because it’s seven million years since I last blogged, but rather because I am burning to talk and to try persuading you to buy a book. Specifically, Bossypants, an autobiography by Tina Fey.

Do you want a star rating? Five out of five, ten out of ten, take your pick.

It’s a very funny and warmly clever book: somehow I think you can miss how difficult that is to achieve because you just expect Tina Fey to be funny and clever.

I’m probably not the intended audience for this book – and I don’t say that because I’m a man. There is, though, a nice moment toward the end when Fey wryly acknowledges the sense (in the book? in the promotion? in my ignorant presumption?) that the book is aimed at women. “If you are male,” she writes, about a metaphor she’s just used involving tampon strings, ”I would liken it to touching your own eyeball, and thank you for buying this book.”

Early on she also refers to “us women” but effortlessly makes it both including for women readers (I presume) yet not excluding for men. I can’t explain grammatically or linguistically how she pulls that off but she does. And perhaps with that line, certainly with the book as a whole, she’s become a writer I admire as much as I enjoy.

The reasons I’m really not the intended audience, though, are that I’m in the UK where Saturday Night Live is quite little known, that I’ve only seen perhaps three episodes of 30 Rock and that I didn’t know she famously has a scar. I knew enough to have formed an impression of Fey as being funny and smart, which meant I read an extract of this book online, which then inevitably meant I bought the book.

I think she does a generally excellent job in neither over-explaining her career nor assuming you know anything about her at all. The only time I was confused was over references to “MVP episode 204” or similar. Is that a 30 Rock term? Is it just a general American one I don’t happen to know? I know “Most Valued Person/People/Professional” but I don’t understand the episodes part. If you want to tell me I am stupid and missing the obvious, I will completely believe you.

Looking back over the book, I think Fey is a technically very accomplished and talented writer but, best of all, you don’t stop to think about that as you first read it. She sounds alive on the page with such energy and verve that it’s an exciting and fast read. She’ll do jokes that rewardingly take pages to play out and then have ones that are quick and just deliciously, delightfully silly. I laughed aloud many, many times; I sat shaking, shaking more times and I read most of it beaming like this woman was telling me these stories to my face.

I’m going to say that I hope you don’t see this as a recommendation per se, more an urging you to buy it. I do have criticisms but not of the book or Fey per se, only with the presentation in iBooks.

The first line of every chapter is followed by an ugly linespace gap because there’s a kind-of drop cap at the start. Then Fey uses a lot of footnote gags but for some reason they are all bundled at the end of the book: not as endnotes, they are one-note-per-page footnotes that are clearly meant to be read alongside their main pages but without any clue what those pages are.

That meant I rather glossed over them but they also added significantly to the page count, which meant the book was really finished some 20 pages before the end of the iBook. When you’re trying so hard to make it last, that came as a blow.

I hope Tina Fey writes more books and I’ll be getting the box sets of 30 Rock now.