Wait. Shouldn’t it be get on your backside? I hear of these writers who work standing up and I’ve even been hearing of ones who write at a stand-up desk while walking on a treadmill. I need to sit down.

Listen, so far this year I’ve written more than a quarter of a million words and they’ve all been published or are in the process of being published. I’m obviously a bit pleased with that because I can’t measure quality but I can feel the width. But in the middle of the very busiest point, I had an idea.

Saturday 25 May. I’m on the bus going over to see my mother. Slightly bleary, slightly dazed: I’m writing the biggest and most complex book I’ve ever done and I’ve just been doing a long Doctor Who script and a short Birmingham Rep one. I was noodling on how I wouldn’t have been able to do that before. Creatively, it was all new to me and I was reaching into new areas. But also just physically managing the volume of it all: that was new too. And I realised that there are things I’ve learnt about writing to deadlines and slicing your time up that had made this hectic time possible. Conceivable.

They’d also made it quite fun. Still daunting, but fun. I don’t think I would’ve been capable of enjoying it a few years ago.

“Pardon?” said a woman sitting next to me.

“There are so many books about creative writing,” I said. “Somebody should write one about doing it all productively, about the business of writing and of how to get things done without collapsing. Something about when you sit down at that glowing blank screen and don’t know what to write next or are having to clutch your chest with anxiety about a deadline.”

It is a good idea. I’d buy that book. I mean, obviously I couldn’t write it, I was far too busy.

But I did have my iPad with me on the bus.

When I started writing there, it was meant to be a kind of prose sketch of the idea: a piece about what the book would be about, a piece that tested for me whether there was enough here to do a book. When I had reached my mother’s place, I’d ended up with a book introduction. I emailed the text to Angela and a wee while later, she emailed back saying she loved it but I did have a typo on line three. Praise, encouragement and an eagle eye. Fantastic.

Obviously I couldn’t write the book, I was far too busy.

Besides, if you’re going to write about being productive, I think you have to be productive. You’re rather beholden to that. You have to get on with it.

Ninety-six days later, I had a proof paperback copy in my hands. “The Blank Screen: Productivity for Creative Writers”. 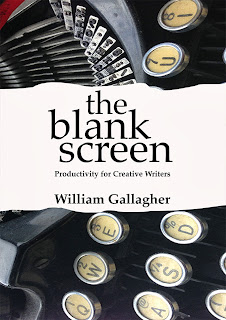 BBC journalist, Doctor Who radio writer and book author William Gallagher shows you how to make the very most of your limited creative time. Find out when you write best – and when you really don’t – plus how to remove many distractions and minimise all of them.

Learn how to get started when it’s the last thing you want to do but the deadlines won’t wait.

Turn email back into a genuine writer’s tool, make phone calls a little easier and a lot more useful. Make your To Do list something you enjoy instead of always avoid. See how to stay the creative writer you are yet also become the efficient person everyone turns to.

Includes how to get more out of your computer and your kettle.

Charlie Jordan, who’s interviewed me on BBC Radio and is a former Birmingham Poet Laureate whose work has choked me up , says:

“It has inspired me to look at my methods of writing more, and inspired me to attempt a few more ‘morning pages’ before the rest of the house wake up.”

Journalist, scriptwriter, novelist and blogger Jason Arnopp – he could write a bit more, couldn’t he? – proofread a copy, gave me loads of clever notes and concluded that the book has a lot of useful advice but:

“Jesus. I wonder if, at some point, you should somehow acknowledge that you are a DYNAMO and that most people don’t work this hard?  Maybe even shouldn’t!”

I have wanted to tell you about this book since about Sunday 26 May and actually I have leaked a few choice bits in blogs since then.

But I finally get to tell you about it properly today.

Because today “The Blank Screen” book goes on sale at the Birmingham Literature Festival.

I read the book now and it is like seeing the contents of my head on paper. Everything I do – everything I do that works, anyway – written out there in bouncy text. So my head is on sale at the most tremendous festival which is being held in my hometown and right at the new Library of Birmingham.

I’m going to try pausing the work for today to just enjoy this.

If you can’t afford to stop working today, if you’re having a really pressing, anxious writing day, let me help you. Here’s a free PDF copy of The Blank Screen’s key chapter on Bad Days. I hope you like it.

And if you do, the book is also available away from the festival: it’s in paperback on Amazon UK and Amazon US, it’s on Kindle for UK and US. It’s actually available worldwide and an iBooks version is coming soon. I expect I’ll babble at you here when that comes out but you’ll definitely learn of it on the new website, theblankscreen.co.uk.

From my head and Birmingham’s Number 1 bus to the rest of the world. How does that happen? And what do I do next?