No, really. With an ish. 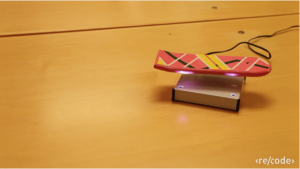 That’s a grab from a video Re/code shot and its accompanying article explains:

I visited the tiny, cluttered headquarters of Arx Pax [near Los Gatos, California] last Wednesday. In fact, I felt morally and professionally compelled to after reading the subject line of an email early last week: “Sneak Peak: Working Hover Technology.”

My mind immediately leaped to the elaborate hoax that Funny or Die pulled off earlier this year, when a video purportedly showing skate legend Tony Hawk riding the “HUVr” product went viral. But I was assured that, in this case, there were literally no strings attached — and not only could I see the hoverboard in person, I could ride the thing.

So let’s go ahead and get this out of the way: Yes, it works. But with a very, very big caveat.

Unlike the hoverboard that Marty McFly steered around the town square of the fictional Hill Valley in “Back to the Future II,” this one can’t just float above any old solid surface.

It’s like a MagLev train: magnets in the hoverboard are repelled by magnets in the surface underneath it. There aren’t a whole lot of surfaces with magnets in: that’s the full and complete ish part of the story. But the Kickstarter is not for a finished Hoverboard per se, it’s for the HENDO Hover Engine developer it. You get the tech, you come up with a way to use it. So that’s a big ish but Re/code’s video has an impressive example of it in use with a small skateboard course and a hoverboard that looks like the Pitbull one from Back to the Future Part II.

Do check out the Kickstarter page too.

Following on from the news that Google is easing up a bit on shoving Google+ at us wherever we go, take a look at this. It’s an oldie but a goodie and one thing to take away from it is how many, many social media platforms there are.

I lean toward madness. But that’s just in general life. Over this specific question, I truly do not know. I do know that I won’t be doing this. But maybe it has more benefits than it might seem. This is a video of a fella named Ross Pruden. It’s a video of him writing. For hours.

Actually, for four hours. He says at the top that it’s a marathon five-hour writing session but, face it, he could’ve been pretty sure nobody would watch to the end to find out. Let the man have a lunch break, why don’t you?

There’s a lot of piddling about at the top but then it is a straight locked-off shot of this man typing. You can’t see what he’s writing but there is a clock, a word count and a total number of stories he’s written. All these numbers go up just about exactly as excitingly as football scores change on Ceefax. I’m honestly torn over what I’d watch more of: at least football has – no, I’m stuck for anything football has. Fortunately, there are other choices than football or this, but before you too race off to ANYTHING else, do take a peek.

Take a peek to see if I’m kidding. I’m not, but you need to know. And then have a think: is he doing this because it’s a brutally persistent form of accountability? To save you digging into this as I have, you should know that Pruden has a bit of a mission on: he was trying to raise Kickstarter funds for a writing project. Is it a spoiler if I tell you he succeeded? Take a look at his Kickstarter page.

It’s called Fixd and I’d be more likely to back this Kickstarter campaign if it were named KITT, but for someone like me with zero car knowledge, I can see a lot of reasons to fancy this: 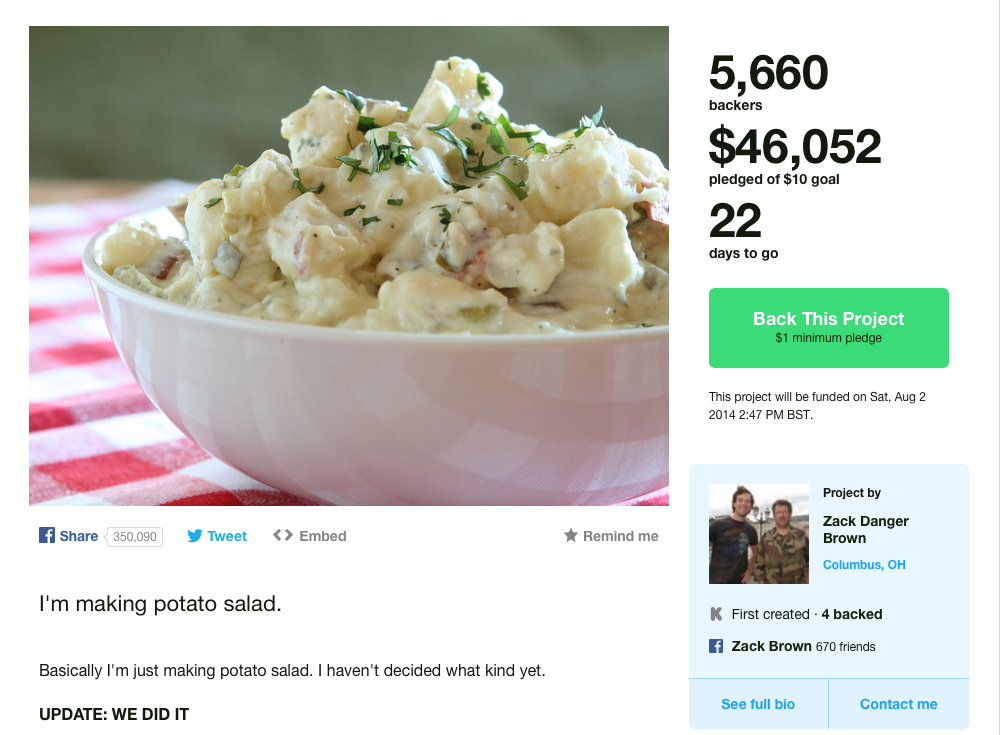 We’re making a lot of great progress. I think it’s time for us to think about getting hats made. I added a new donor level for people who want hats.

And he made a stretch goal – long since beaten – where he says:

Go take a look and back this vital work on Kickstarter.

It is a Kickstarter campaign but it’s already achieved it’s funding, this is happening.

It’s called Electric Objects. Go check out the Kickstarter page. At this stage, you’re not pledging, you’re buying at a pre-sale price. And then admittedly waiting a bit.