Honestly, I didn’t know where to start with this. A company is taking votes on whether to make a onesie that looks like a suit. Sort of. It’s already got more votes than it needed so this is happening, at least to prototype stage. But let someone I’ve never heard of explain it much better and with even more sarcasm than I could’ve mustered since I’m secretly curious.

When the prices of the steel and (especially) gold Apple Watches are announced, I expect the tech press to have the biggest collective shit-fit in the history of Apple-versus-the-standard-tech-industry shit-fits. The utilitarian mindset that asks “Why would anyone waste money on a gold watch?” isn’t going to be able to come to grips with what Apple is doing here. They’re going to say that Jony Ive and Tim Cook have lost their minds. They’re going to wear out their keyboards typing “This never would have happened if Steve Jobs were alive.” They’re going to predict utter and humiliating failure…

And then people will line up around the block at Apple Stores around the world to buy them. I think Apple Watch prices are going to be shockingly high — gasp-inducingly, get-me-to-the-fainting-couch high — from the perspective of the tech industry. But at the same time, there is room for them to be disruptively low from the perspective of the traditional watch and jewelry world. There’s a massive pricing umbrella in the luxury watch world, and Apple is aiming to take advantage of it.

I read a comment the other day that the technology press is an oddly conservative group. I think so. It feels as if every time something new comes out it either gets slammed or exalted and then later positions quietly reverse. I’m thinking of when the iPhone came out and Apple was mocked; you don’t see so many technology sites mentioning their initial reports now. I’m also thinking of the fairly countless times a Microsoft or Samsung or Dell or generic Android device has been lauded and now you can’t even remember their name. And you didn’t buy them.

Gruber has a long piece examining the Apple Watch and in a small part about how it will be seen by this tech press. I think he’s actually quite down on the watch; for all his praise, he’s clear that he expects it to do more than Apple has announced so far or “Apple is in deep trouble”.

I like the watch more than he does. I like it a lot, I’m impressed, I’m buying.

But Apple’s always claimed to be at the intersection between technology and the arts, a spot and a phrase I rather like, where Gruber makes a case that it’s somewhere else. Somewhere more. The intersection of technology, arts, fashion and watches. With technology more in the background. I don’t know that I’m persuaded, I don’t know that it matters, but I think he’s right that it will be most visible in the pricing of the Apple Watch when it finally comes out.

High heels make you stand up straighter, they push your shoulders back and you look more confident, they somehow do nice things to how your calves look. What’s not to like? Apart from the way they destroy your feet, hurt like the devil and if men like them so much, let them bloody well wear ’em for a bit and see what it’s like.

Men did wear high heels. We wore them first. We came back to our senses. This is one of myriad tiny moments of information I relished in this week’s edition of the 99% Invisible podcast. It’s a really well-made series about design and it appeals to the part of me that thinks of the details in how we do things, why we do them, and whether they help us or not.

Usually, I just have a good time listening to this show but this week’s one about the engineering and the history of high heels is particularly fascinating. There is something just riveting to me about its detail on how engineering and design solved certain problems in making heels and how that contrasts with how they are the devils’ torture tools.

You’ll wince a lot but you’ll also laugh. There’s a moment when the regular presenter Roman Mars recommends Googling a particular topic but deeply strongly advises that you don’t use the image search. “There are some things you just can’t un-see.”

Do have a listen to this episode of 99% Invisible.

Two things I can’t look at. Ballet dancers and women teetering in high heels. I get it, I get it especially with ballet and the remarkable, unearthly beauty of dance – but have you looked at their toes? Standing on the tip of your toes. Walking on them. I feel queasy. And there is nothing that can be done to help them.

Whereas seemingly there may be something that can be done to stop high heels breaking ankles and generally keeping the medical industry in pocket. It is a little bit like the kind of solution you’d expect to see in Thunderbirds or concocted by Professor Branestawm but it’s from Silvia Fado Moreno, a graduate of the London College of Fashion, so it must be good. 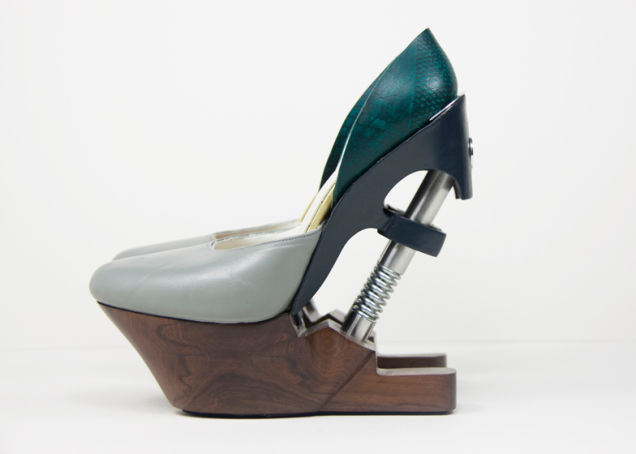 That image, and more, are on Gizmodo’s site where writer Jordan Kushins says:

Check out the hydraulics on these babies! Moreno’s creations aren’t exactly subtle—at all—but they do offer an interesting take on the idea that the mechanics of our bodies are complex, and hey: That humanoid machinery deserves footwear that’s going to really and truly support it.

I came across this via Digg and an article in something called The Daily Dot which I think is the clearer, sharper read.