BETA stands for Doesn’t Work, Will Break, Might Delete Everything. It’s become a more familiar term since Google labelled Gmail as a beta for years and Apple did the same with Siri. It’s familiar enough a term that people don’t understand it and that’s more than just a shame when it means you can end up losing your work.

The current iOS 9 and OS X betas from Apple are causing problems. The beta for watchOS 2.0 which drives Apple Watches is apparently driving those watches back to Apple as they become useless.

You can and I do think Apple shouldn’t have put out software in this state but that is what beta software is. When you’re first making an application, you clobber together bits and pieces until it sort of, kinda, a bit looks like one day it may work. That’s an alpha release and it’s where you see if the thing has any point and it’s the place you think, do you know, it’d be much better in yellow. Or blue. Purple and orange with spots.

Eventually you reach a point where someone says enough. You can’t change the colour any more. It’s time to get this out into the hands of people to try it.

That’s a beta. It’s software of a set colour being put out to be tried. It will break. It cannot fail but to break. The issue is over how badly. If you’re a developer, the intended audience for a beta, these crashing failures are just your day to day life. They are why there is a beta. A bit breaks, you fix it, next day you move on.

If you’re a user, it’s different. You’re using your computer or your phone to ring people up or to compute, you can’t afford to have a problem. Hence the warnings every software company gives you about how you shouldn’t try this beta on your main or primary computing device and how you should have a backup. It’s a warning to us but it’s not. It’s really a note to future litigators that the company did warn people.

Few folk pay attention to that warning and today that means some people are having to return their watches to Apple.

It’s bad and worse than it should’ve been, worse than it would’ve been if Apple hadn’t made this beta public. But betas are there to be tested and for the problems to be found. There is no better way of testing software that will be relied on by millions of people than to try it with millions. Hence the public beta and for all the problems current ones are causing people, we’re seeing more of it and we’re going to see still more.

It’s important to beta test. You just haven’t signed on to be the one who gets problems so don’t be the one who installs and runs this pre-release stuff.

By the way, alpha releases are followed by beta releases but betas are not followed by gammas. The one after a beta is known as the GM or Gold Master, it’s the version of the software that is ready to ship. It used to be that software was sold on shiny discs so the Gold Master would be sent to the pressing plant. Funny how terms continue long after what they describe is gone.

Quick version: it looks good, mostly – no, wait, here’s how I summed it up for MacNN:

Testing this new beta is, actually, slightly weird: the Mac versions of Word and Excel now look like the iPad versions. That’s mostly true when you first start them up and they present a dialog box with New and Open options, plus templates. Choose one and go into it to edit the document, and the resemblance fades a little.

One thing that made the iOS version of Office a pleasure to use was that it was pared back, that some of Microsoft Office’s more esoteric features were removed. That even makes the Ribbon toolbar more useful, and this new Mac version also tries to balance features with a more minimalist look. We’ll have to see what it’s like after weeks and months of intense use, but at first blush it feels better than it was.

There are points where items seem a bit oversized: certain icons in the Ribbon feel excessive, and intro text as you set up the applications feels loud. That’s not a bad summary of the entire experience of using Microsoft Office 2016; it mostly looks better, Word feels good to write in, Excel feels powerful.

If you’ve got a Mac and some time to kill, go get the Office 2016 preview here. It’s entirely free while it’s in beta and the best way to find out about anything is to use it. Do remember that it’s a beta, though: it’s not complete and it is always possible that you’ll lose work. So don’t do anything important in it.

Also, you could read the rest of my MacNN piece.

They’ll join OmniFocus, which I may have mentioned one or a thousand times before. There’s no timescale yet but the Omni Group is looking for beta testers for the apps:

Are any of you interested in helping us test our apps before they’re ready to submit to the App Store? We’re working on bringing all of our iPad apps to the iPhone, so we have a lot of testing to do! And with Apple’s new TestFlight Beta Testing program, we’re able to invite up to 1,000 of our customers to test our apps while they’re still under development.

There’s not a lot more detail in the full piece but it does include instructions on how to apply to be a beta tester. I think that 1,000 Apple-imposed testing limit will fill up very quickly so go take a look now if you fancy it. I’ve applied but I only really know OmniFocus: as much as I use OmniOutliner, I’d say I’m a very basic user of it. I’m looking at OmniPlan but haven’t even glanced at OmniGraffle.

So for me the news here is that at some point soon we’re going to have OmniOutliner on iPhone and that’s big.

You have to suspect that this move is related to the bigger screens of the iPhone 6 and iPhone 6 Plus. I’m currently sticking with my iPhone 5 so I’m curious to see both how these apps work on that and whether their presence will change how I use the iPad versions.

Speaking of which, the iPad versions of OmniFocus, OmniOutliner, OmniGraffle and OmniPlan are available now. There’s also the iPhone version of OmniFocus and there are Mac editions of the lot too. Those Mac ones are available in the Mac App Store but I recommend getting them from the Omni Group’s official site. 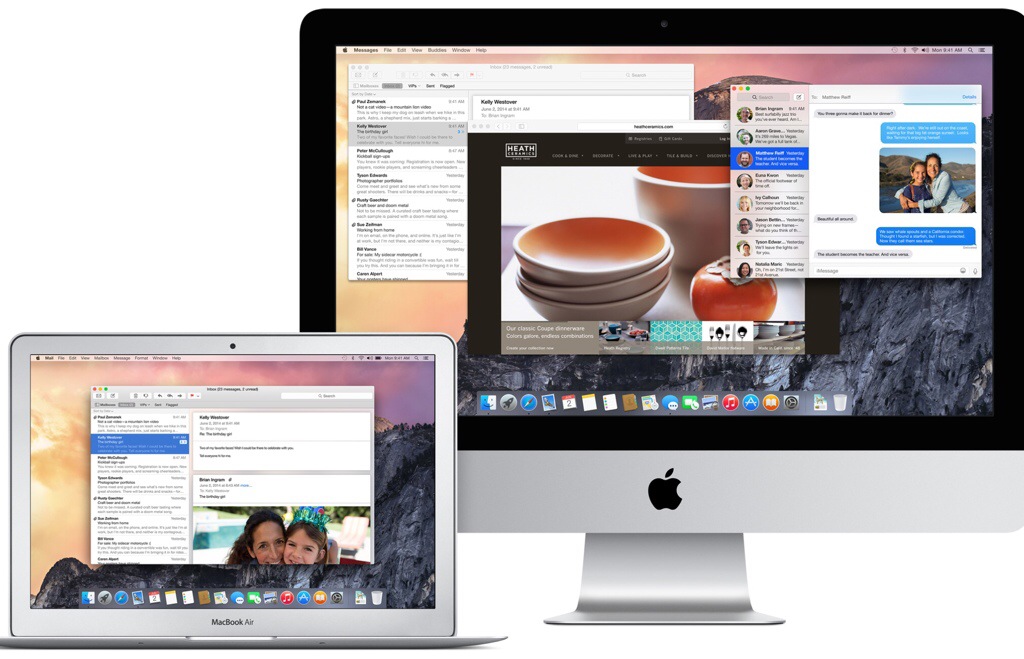 That’s think about it in two senses. On the one hand, OS X Yosemite looks like it’s going to be rather excellent. In that sense, I wouldn’t hesitate, I’d download instantly.

On the other hand, this is beta software. If you get this, it will go wrong. Hopefully in some minor way you don’t even notice. But you could lose work. It’s highly possible because it’s a beta.

Don’t get it if you haven’t got a spare Mac to run it on. I have a semi-spare one so right this moment, I am downloading that beta.

I’d really recommend that you don’t. Not yet. Wait until tomorrow, watch the many YouTube videos there will be showing you it in action and either decide then or wait until the final version is released properly in a couple of months.

But I can’t resist. Can’t. Wish me luck and call me stupid.

If you really want to do this too, run to the official website here. Only the first million people who apply will get it and if you think a million is a lot, you’re wrong.

What’s more, the beta test version is available right now. Or at least, it is to those of us who were on the beta last year and who haven’t forgotten their login details like I have. I’m working on getting those back so I can spend the evening playing with this – seriously, I’m not ashamed to say that to you – and if you haven’t beta-ed before but want to, you can sign up to be added to a list.

When we unveiled our plans for OmniFocus 2 for Mac last year and invited you to try our test builds, it was so we could learn from you which parts of the design were working well, and which parts still needed improvement. We didn’t know what to expect, so we weren’t sure how close we might be to setting a ship date.

The feedback you provided was generally positive: the new design was easier to navigate, and the new Forecast and Review modes were making it much easier to stay on top of all your projects.

But listening to your feedback, we also learned a lot about ways we could make the app even better—and we were further inspired by Apple’s latest designs when they unveiled iOS 7.

We paused our test builds and went back into heads-down mode to focus on the hard work of another round of design and development. Since that time, our team has been working tirelessly behind the scenes on a fresh design that preserves the best features of their original work while adapting to the latest changes to the platform.

With this new design in place, I’m thrilled to announce that OmniFocus 2 is now ready for its final round of testing.

Update – I’ve got my login details back. I’m not kidding: that’s my evening sorted out. Man, I must love this software.

Do go read that full Omni Group blog because it has much more specific detail about what they’ve been doing.

21:01. It’s gorgeous. All the power of the old Mac version but even more of the gorgeousness of the iPad one. I used to hesitate recommending OmniFocus (you couldn’t tell I was hesitating but I was) because the Mac one was hard to learn. It was worth it, but it took effort where the iPad and iPhone versions were straightforward. Now I think the new Mac version is going to be the best of the three.