I know I overthink this, but I feel bad whenever I find myself slipping into male stereotype. When I’m clothes shopping, for instance, and I don’t spend above twenty seconds picking anything. You know me, you know how I dress, tell me you’re surprised.

Or when I get some beers in to watch the footba – no, come on, I can’t say that one with a straight face. I don’t drink and the most I’ve ever seen of football is one half of a game when I worked in radio. I spent the entire time facing the audience I was interviewing, didn’t see a single goal or whatever.

And actually I did feel very separated, very isolated. Saying this to you now, I’ve remembered how it felt when I walked into the ground. It was like slapping into a solid wall. Such total fandom, such tightly-woven atmosphere. I felt like the unwashed.

Or maybe that’s another male stereotype of mine.

I was thinking about washing and grooming in Solihull recently, while I waited for my iPhone to be repaired and quietly sobbed about how much that was costing. I like Solihull and I used to work nearby so I know it, but still I was only there because it was the sole Apple Store that could fix the phone that week. And so there I am, waiting for an Apple repair, sitting having tea in John Lewis – sometimes my hard man image is overpowering – and realising how good everyone looked.

They all, every single person I passed, looked like they’d been cleaned by someone else.

Do you know Solihull’s Touchwood shopping centre? If you don’t, I can help you picture it by explaining that the Apple Store is the cheapest place in it.

Much more expensive is the Tesla car place halfway between Apple and John Lewis.

I have never once had the slightest interest in cars other than as the way to get me to wherever I need to be. No, tell a lie: a very long time ago I used to enjoy driving and would somehow relish hundreds of miles. Unfathomably boring now. And even then, you could tell me the difference in mule power or something and I might nod at you politely, but I’d really be concentrating on tuning in Radio 4.

Maybe it’s the technology. Maybe it’s the fact that I had two hours to kill. And, okay, maybe it’s the midlife crisis. But I went into the Tesla store and I arranged a test drive. 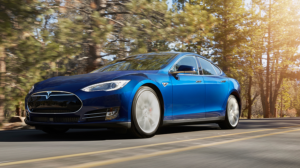 Listen, the first thing I said to the salesman was, well, it was hello, but then it was look, it’s not happening. I cannot buy a Tesla car and even if I could, I’d have to buy a new house first. My house doesn’t have a garage and if you think I’m leaving a £60,000 car out on the street then please tell me where you think I’d get £60,000 in the first place.

It is impossible that I can ever buy a Tesla car but unfortunately I now also cannot ever buy anything else. Take it from me, a car expert of several days standing or, if you must, a middle-aged man: this is an electric car and it is how cars should be. It’s how cars should always have been and now are. Albeit with a price tag.

The only way I can think to help you gauge my lack of knowledge about cars is to explain that it’s even less than my interest in them. But I sat in the passenger seat while the salesman was walking around to the driver’s side and I said Wow.

Actually, I said wow followed by “I hope he didn’t hear that”. He did.

It was wow about the roof. Just barely interrupted glass from the windshield to over and beyond my head.

And shortly afterwards I said – I’m not proud of this but I said it and I said it loudly – “Frack”. There’s some history to that word, it predates the ecological use of it in fracking, as it was a made-up swearword in the 1970s Battlestar Galactica. (Some sources spell it ‘frak’. Never say I’m not thorough.) If you happen across the original show, watch for when exciting fighter pilots launch their ships.

These ships are catapulted out into space from this analogy of an aircraft carrier and each time it happens, we see the pilots slammed back into their seats by the force of acceleration. I just had exactly that. Really. Exactly. The salesman was driving us out of Touchwood to a park where I was to take over and after waiting at some traffic lights, frack.

Sometimes I don’t think my own car actually accelerates at all and in comparison this was a punch to the chest. And not an exaggeration. It winded me. Not the speed, as this was a residential area, but the acceleration.

Dear god. I nearly said nought to sixty to you like a male petrolhead. Fortunately I know you’re supposed to follow that phrase with some seconds and to me seconds are when you go back to get more pudding.

“Are you okay if we try Autopilot?” asked the salesman.

“No,” I nodded. I knew that Tesla has this thing that’s like a bionic cruise control and I’ve driven cars with that, it’s spooky having the car drive while you take your foot off the accelerator.

Stuff cruise control, though. Autopilot did that plus it steered the car. It steered the car. If you’re a car freak you know this already but I’m not and suddenly I get why the word freak is used. It took a bend in the motorway. It zoomed us up to two car lengths behind the next vehicle. Then when that car changed lanes, mine zoomed up to close the distance between us and the next one.

Flick the turn indicator and the car starts looking for a gap in the next lane. It found one, started to change lanes for me – and then jerked back away because another car had suddenly crossed over from the other side and would’ve been in the way.

It is the spookiest, freakiest, best thing ever. I am simultaneously scared as the car accelerates to what looks like it’s going to be too close behind another one and I am also certain that I want this.

Here’s how comfortable I got with autopilot in seconds. The salesman was answering a question about charging or Radio 4 or possibly my bald spot and I realised I was looking at the controls and hair care products he was telling me about. I wasn’t looking at the road. I knew the car would do that for me.

I don’t mean intellectually, that I knew because I’m a car fan who understands how it works. I mean, I do understand, but really I mean that I knew it in my bones. I trusted this car.

Oh, and then when we got back, this trusted car only went and parked itself. Found the space and parked in it.

I write about technology and I feel as if I sit at the point where it and art cross: I have no more interest in electronics than I do in combustion engines but I am riveted and excited and thrilled at what technology can let me do. All my books, all my scripts, my video and audio work, it’s enabled and empowered by technology and I am alert to that yet still I’m focused on the job.

Sitting in this Tesla car reminded me of this and of something so very long forgotten. The first time I owned a car and got into it. It felt like this was a whole world. I could go anywhere in it. That sensation vanished quickly but it came back in this Tesla. I am instantaneously addicted to Autopilot. I am instantaneously addicted to cars parking themselves. I enjoyed driving again.

The salesman said he could arrange a 24-hour test drive for me and I can’t do that to him, not when there is zero chance of my buying. But when he said “and you could drop it back on Monday evening” I had to ask: “Would you have a team of specialists waiting to tear me away from it?”

I’m telling you this now chiefly because it’s just happened but also because I am thinking of so many things. You know when you’re writing and you can’t see the words for the stress? It’s been like that for me lately. Brilliant times in so many ways, tough in others. So I’m thinking about Tesla cars and how I can’t imagine getting one. I’m thinking about male pattern stereotypes and nature versus nurture. I’m thinking about technology and art, I’m thinking about the cocoon feeling this car gave me and how it’s similar to the very best moments in writing. Those distressingly rare moments when the writing is going so well and you are so into it that there is nothing else whatsoever in the entire world or in your entire head but the next word. I find those moments blissful uplifting and energising.

But I’m also telling you because as I write this, Tesla is about to reveal details of a cheaper car. Damn them to hell. This “cheaper” car is merely £35,000 instead of £60,000 and when exactly did £35,000 become cheap? I’ll tell you when: it’s at something like 1am tonight when there’s a live stream of the first thirty Tesla Model 3 cars being handed over to their owners.

Look, I’m going to be walking everywhere before I can spend that money on a car. But this is a car and it is getting a live streamed launch event. Told you this is like Apple. I won’t be watching, I said lying, and I can’t find out where the stream will be but presumably on Tesla’s website.

I’ve just had a thought. If you gave me a pound toward a Tesla car right now, I’d have an entire pound toward it. Can you tell 34,999 of your friends about me?