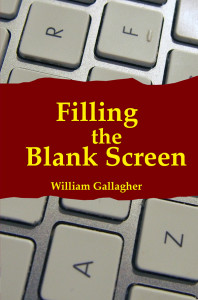 Last year, The Blank Screen book captured every single thing I knew about being a productive yet still creative writer. How to beat distractions. Get started. Cope with the day job, cope with deadlines, cope with other people – and cope with yourself too. There’s also an astonishingly popular bit in it about kettles. Tea-making aside, I am deeply proud of how useful the book has proved to people. Actually, hang on, how about this quote?

“Love this book, it is clever and witty and genuinely grapples with making an extra hour (or two) in the day. Inspiring and liberating. A real Can-Do manual. No creative should be without it.”

That was an out-of-the-blue email from Barbara Machin, creator of BBC’s Waking the Dead. Made my day, didn’t it? So did getting tweets at 5am from people saying they had finally finished their novels because of what I’d told them. Okay, being up and working and able to tweet right back at them that second was part of the fun.

But that’s the thing. People. The Blank Screen book became a workshop that I have now done all over the country. I’ve done versions for individuals – that’s intense but fantastic: ask me about that – and I’ve spoken at literary festivals, in universities, I’ve worked with new and amateur writers, I’ve worked with long-time professionals. Next week I’m in Newcastle and it is to spend a day with writers but also with journalists, musicians and actors. People who have to create, whose passion is in creating new work but who are having to do more of that and do it alongside so many other jobs that their creativity is under pressure. The work they live to do is being squeezed to one side like the credits on a TV show while they are having to run businesses or get day jobs.

I know that what I’ve got for them will help with everything they’re doing. That’s a great feeling, to actually know that this works. But what’s greater, for me personally, is that I do not know what they’ve got for me. I just know that they will have something.

It’s more or less exactly a year since The Blank Screen first came out and now I’ve learnt so much from so many people that I’m ecstatic to tell you today sees the official publication of a new book: Filling the Blank Screen. One hundred chapters of advice, tips, recommendations and daft anecdotes from a year of making more people more productive.

This new book is actually a distillation of more than a thousand articles on The Blank Screen news site and of more than a quarter of a million words written on there since November 2013. One hundred of the best, the most-talked about and the most-read pieces have been continued, developed, updated and given a nice scrub to make this new ebook. If you and I have talked at a workshop, I have stolen your brilliant idea and it’s in chapter 3.

Filling the Blank Screen is due to be released in paperback on 12 September and the ebook is out today.

The aim of this new book is not to replace The Blank Screen, I still know that will be useful to you and I hope also entertain. But Filling the Blank Screen is a burst of bite-sized pieces you can grab on the run and which tell you what to do to get things done. Read one piece a day and in a hundred days you’ll have had a good time and I’ll have the reputation for writing long books.

Quick aside? Since it’s you? Filling the Blank Screen is not the book I was planning to write this year. It really did come out of the unexpected success of the workshops and the news site. It felt like it was the book itself that wanted to be written. Which is startling and great, obviously, and I’m dancing here, but still it is not the book I was planning to write. Which means I am deep into the planned book and that’s what I should be working on right now. If only there were a couple of books out with great and tested advice about getting writing finished and beating distractions and putting the kettle on this minute.

It is a treat that I get to tell you these things. Thanks.

I am three hours early for a gig. I’m in a Costa Coffee and am on my second mug. Can I get you one?

It’s strange being somewhere familiar yet in such an unfamiliar way and at an unfamiliar time. We’re drinking in Stratford upon Avon, you and I, and I’ve been here a thousand times. What about you? Probably most often I come for the theatre – the RSC is just over there, behind the high street, you can see the tower – but I’ve also often come just for the sake of coming. Idly, purposefully, for half an hour, for a day.

Always for fun, though.

I’m confident today will be fun too, but it’s different. I’m at the Stratford Literary Festival and I’ll be doing The Blank Screen workshop for creative writers and possibly some normal people too. (Have you heard me go on about this? Take a look at The Blank Screen news site but bring a packed lunch, I talk a lot.)

I talk a lot, I do this particular workshop a lot and it is a thrill how weeks or months after a session I will get a tweet from someone saying they were using what I told them. That they had therefore finished their novel. God, that is wonderful.

However, since it’s you, I’m going to admit something. Today is the first time I’ve run The Blank Screen as a full day workshop. Considering that I have regularly struggled to get everything in, I should be ecstatic. But I’m so used to squeezing down that I’m blinking at the idea of not galloping through things at lightspeed. I’ve done this in a country hour.

In comparison, a whole day feels as long as a radio show: that clutch in the stomach when you know you could have dead air. I am prepared through the roof and I know this stuff I do works, I am excited to get to meet new people and talk about it. But I am stomach-clutching.

I knew I’d be nervous. I know I am always nervous until the second that I start and some kind of light switch switches on. I even spotted a while ago that I was so nervous about this one that I had made a mistake with the trains. I booked myself on one leaving Birmingham at half past stupid o’clock. Hence being here three hours early.

What I had forgotten, though, was how different a place looks when you’re working there. Most of the shops are closed. (Bless Costa.) People look like they’ve yet to be wound up properly for work. I passed a dozen Morris Dancers rehearsing. The streets are busy enough but they feel like a stage set, not quite ready for lights and cameras and action yet. Definitely not ready for tourists, not yet. I’m suddenly reminded of a morning in New York City where workmen just nodded at me like I lived there because no other tourist would be up at that silly time. (No other tourist was recording a UK DVD Review podcast, but that’s another story.)

And today I walked from the station to here. Walking is especially good for showing you a place. (I loathe that I just said that to you. I’m a writer. We sit. We sit good.)

Walking through streets and going to work. I feel more at home here today than I ever have. It feels more familiar than it ever has.

Which interests me particularly because I ran a news story on The Blank Screen earlier this week about research that indicates working away from home is good for us. Just to be Russian doll about it, let me quote the quote I quoted in that Blank Screen story that I’m now quoting:

Research shows that experience in other countries makes us more flexible, creative, and complex thinkers.

How does studying or working abroad change you? You return with a photo album full of memories and a suitcase full of souvenirs, sure. But you may also come back from your time in another country with an ability to think more complexly and creatively—and you may be professionally more successful as a result.

These are the conclusions of a growing body of research on the effects of study- and work-abroad experiences. For example: A study led by William Maddux, an associate professor of organizational behavior at INSEAD, found that among students enrolled in an international MBA program, their “multicultural engagement”—the extent to which they adapted to and learned about new cultures—predicted how “integratively complex” their thinking became.

Read that exact same quote all over again on Go Away. As Far as You Can together with details of the research or at least of where I first heard about all this. Plus musings of when I personally first gathered that going away was a good thing, before I read it anywhere.

It’s really, specifically, that working away somewhere is good though. Not just going. Not just visiting. Working. Becoming part of the place shapes you. And I am fully confident that today in Stratford would shape my writing. If I weren’t so nervous that I can’t write.

They do toasted things here, want to split one with me?