Apart from the framed cover of my first book, I’ve only ever chosen two pictures for our walls. The first was five years ago and a little related to that book: it was a single blown-up page of script from Alan Plater’s Fortunes of War dramatisation. People see that, read the page, have no clue why the text makes me sob.

From now on, they’ll be able to look to their left and see this as well. 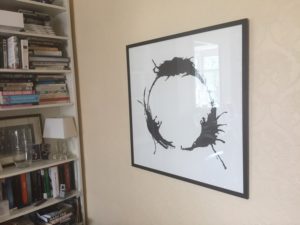 I like that one is typewriter text and the other is also text but in a graphical form. I like that both speak to me about language. I like very much that this new one is the symbol for Time as seen in the film Arrival.

I like less that there were actually three different symbols for Time in the movie. But this is the main one, this is the one the characters pointed to when they called Time. And in a weird way, this is the one that reads like Time to me. It’s not like I think I can read the Heptapod language it comes from, but I read this symbol and I read it as Time.

I don’t know why this matters to me so much but I don’t need to: it just matters and oh, my lights, it matters enormously.

Whether it’s in English or Heptapod.