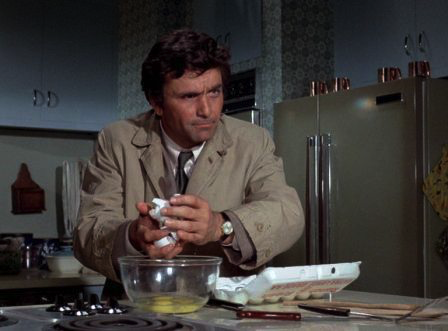 There’s good and bad in this. On the one hand, this is the 50th anniversary of the first-ever Columbo and we’re still watching, we’re still talking about it. Isn’t it astonishing that something written half a century ago still thrives? I’d kill to write something you remember for half a minute.

But because it’s the anniversary, people are also tweeting about Columbo and if you don’t happen to have seen the show, this is probably the time you’re going to give it a go.

If you pick an episode made in its original run from 1968 to 1978 then you’re fine. There are some episodes that don’t particularly work, there are many that are very good and there are a startling number that are superb.

It’s just that in 1989 the show came back and as it limped on to 2003, there was a contractual requirement that every episode be unutterable crap. Really, there’s one called Columbo Goes to College that seems to be great until a totally dreadful ending. Otherwise, no. Not a one.

Whereas that original run… I think you know the show. I don’t know if you’ve seen it. But you at least have an idea of Lt Columbo as played by Peter Falk and even if you don’t happen to know the term ‘open book mystery’, you know that every episode began with the crime being committed. Columbo was almost never a whodunnit, it was a how’s-he-going-to-catch-the-murderer.

Columbo wasn’t the first to use the open book format but it remains the most famous example and easily the best.

But what makes all this so good, what makes it all so very satisfying is the consequence of our knowing who committed the crime. The average murder mystery keeps us guessing and keeps us watching only because it manages to make us want to know whodunit. When we do, it’s over, we’re gone.

The average murder mystery has no repeat value: when you know the answer to the puzzle, so many crime and mystery shows are empty. So many detectives are walking police procedural plot exposition and so many murders are the biggest name in the cast list and nothing else.

Murder, actually, becomes nothing. Someone is killed and then the killer is caught, somehow all is right with the world. I remember Veronica Mars being very good at how it resisted that, how it conveyed the real impact of death.

Whereas with Columbo, the show has to hold us for at least an hour after we’ve seen whodunit. So you never get a case where the butler did it, you never get anything where it could be one of several suspects. Instead, you get a fantastic villain and a murder that was done for a reason.

We get to see why they’ve done it, we get to understand why they’ve killed. Sometimes we’re even on their side.

Invariably, though, at least in 1968-1978, the richness of that guest character was matched by Columbo himself. Two characters, two actors, toe to toe for a feature-length story. Columbo had tremendous performances and its scripts demanded them.

So go on, watch one. You could get the entire run on DVD, for one thing. Or if you spot an episode coming up on TV, check its title against an episode guide to see whether it’s Good Columbo 1968-1978 or Unbearably Embarrassing Columbo 1989-2003. You won’t thank me if you end up watching, god help us, 1991’s Murder Can be Hazardous to Your Health. But you will if you catch Prescription: Murder, Ransom for a Dead Man, Murder by the Book… wait, I’m just starting to list episodes now.

No, two. If you recognise “one more thing” then you’re either a Steve Jobs fan or you’ve seen Columbo. In every single episode of the detective show, the Lieutenant will leave a scene and then immediately come back in saying “Oh, just one more thing”. It became something you looked forward to because his one more thing was always a fantastically loaded little question and, what’s more, it was always what he had planned to ask from the start. He did this one-more-thing lark to catch people off guard and there are few more satisfying moments in the show.

But the one more thing I want to tell you is that it’s a lie that Columbo is 50 years old.

It was 20 February 1968 when a one-off TV movie called Prescription: Murder aired and it’s true that this was the first proper Columbo on television. But it was based on a stage play that had successfully toured for some time from 1962 with Thomas Mitchell as Columbo.

Only, one more one more thing. The stage play Prescription: Murder was developed from a 1960 play called Enough Rope which aired as an episode of the TV series The Chevy Mystery Show and featured Bert Freed as Columbo.

If that show still exists then it isn’t available anywhere but you can watch Columbo co-creator and co-writer William Link on how fortunate they were to eventually get Peter Falk.

So it’s 50 years since Falk first played Columbo and it’s almost 60 since the character was invented. Six decades and still going. I tell you, I’m not kidding: I’d love you to remember something I’ve written 60 seconds after you read it.