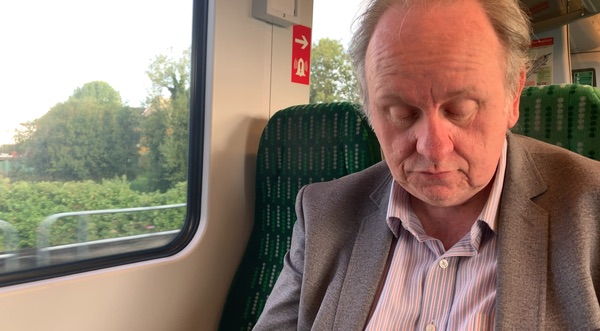 We can analyse this predictable forthcoming about-face in some detail at any time or in any psychiatrist’s office of your choosing, but let me instead focus on the one thing that is undeniably good about this script.

Most of the time I’m a rather practical, even pragmatic, writer, in that if I have an idea then I also know that I will finish it. There aren’t a lot of opening scenes or chapters here. I’ll abandon, certainly, but usually the thing I like as much about getting an idea is seeing it through to the end. That applies as much to events as it does writing, but invariably it’s applied to everything I write.

Except I need a word that’s somewhere between invariably and variably.

Because every now and again, there is something that I think is good, that I think I may even be able to do well, but I keep not doing it.

Recently I’ve been talking with a writer who keeps not writing her book, and the discussion becomes one about the business of writing as much as the art. She needs to be in the right place, so to speak, to write this novel, and I absolutely see that – but not if it means it never gets done.

I didn’t believe in the muse and if I now wonder about it, I don’t think muses are on our side.

But there are people who are. I hope that in talking with me, this friend will write more of her novel, not least because I want to read it.

And in talking with people in a particular writer development programme I’ve been on – Room 204 from Writing West Midlands – I’ve written more of this script. So much more that yesterday on a train, I finished it.

I can see me there, stopped at Northampton again, looking at the screen and thinking, really? It’s called Sequences Shortened and the idea came from another friend, radio presenter and poet Charlie Jordan, who mentioned something about her work to me around 2017. It happens to be something I used to do too, back when I was working for the BBC, and it is the tiniest thing, yet it started something that finished yesterday.

You can’t wait for the muse. I don’t know what in the world you can wait for, I just know that on occasion, there are projects that take a long time. Projects that are sweet stones in your stomach, pressing away at you, somehow keeping you in them and yet away from the keyboard.

Writing that scares you, really. And for all that this is a job, I make my living entirely through writing, there have to be things you write that scare you.

I think this one has worked out. If only there wasn’t a book that I was afraid to finish too.

That’s it, that’s all I’ve got that’s in any way to do with Game of Thrones. Writer is coming. I thought of it and, in my head, that sounded like a good title. It might be a bit portentous, I thought, and that’s not me, that’s more poncy than I intend to be. But it’s a good title and I’ve over-thought it. Except I possibly haven’t thought about it enough because now that I’ve actually written it down, now that you’re looking at it, I have an uneasy feeling that it might be rude.

I was thinking of this title when I got into a conversation about writing and writers. I get into these quite a lot, really, and I don’t think you’re surprised since it’s what you and I natter about all the time. But for some reason this week I noticed how similar these chats can be. I noticed that we are quite prone to the same concerns – but unfortunately also to the same nonsense.

I’m used to this from the outside. The rubbish that is said to writers is ridiculous. Sometimes it’s also manipulative. Such as a new one I heard the other day, where a film student told me that she’d been warned that if she joined a union like the Writers’ Guild – or Equity, the Musicians’ Union, any of them – she’d find it harder to get work.

Then there’s the issue of copyright which I think must arise naturally a little but is surely exploited by writing courses and writing tutors trying to justify why you spent money on them. I run writing courses, I am a writing tutor, and I don’t believe you can be taught writing. I think you can be taught to write better. That’s why I do it and I am not going to pad out a short course by making up rules about how you must copyright your ideas. Or Else.

I’m not saying you’ll never be ripped off – though in nearly thirty years, it’s only happened to me once – but I am saying get a life. Maybe it’s different in the US where things are more litigious and I know the Writers’ Guild of America runs a service to help writers register scripts for this reason.

But I also know this. Whenever I’ve been sent a script or, back when I was editing magazines, I was sent an unsolicited article, and the piece has copyright threats all over the front cover, I can already tell you what the following pages are going to be like. They will be amateur.

Writers also always hear the same things when they’ve been asked what they do for a living. It’s either that the person who asked then tells you that they’re thinking of writing a book but they haven’t the time because they’ve got a real job like being an accountant. One variation on that: sometimes they tell you they have this brilliant idea, it’s about twins, now you just have to write it and we can split the profits.

Or more often, they say something along the lines of good luck, you might make it one day, you keep on trying.

It doesn’t matter what you’ve done, they’ll still say that. A friend I’ve known since school asked me recently whether I’ve ever been published. “Um, just a bit,” I told her.

If I’d said anything more, if I’d listed books or scripts, I’d be the one who was being rude. I’d be simultaneously boasting and defensive, I’d be preening and trying to justify myself, and this person who doesn’t read much would point out that she’s never read anything of mine. And then I’d be off saying things like you got me, I’m lying, I’ve been a fool to myself, let’s not bother with dessert, and can we have the bill now, please?

I do think she believes that I’m playing at this. That writing is something you play with until you grow up.

Anyway, you know all this, you’ve heard all of this, I’m just trying so hard not to get to the point.

Because the point is that I realised this week that for all the nonsense that’s said to writers, we don’t half say some bollocks back, too.

Maybe the biggest one is that we have a tendency to talk about writers’ block. If there’s ever anything that says writing is not a job, it’s writers’ block.

Tell me the last time you heard an engineer complain about engineer’s block, or a plumber, or a nurse. Tell me when you’ve ever heard an artist talking about painter’s block or sculptor’s block.

We own this writers’ block phrase and we deserve all we get.

It’s not that there’s some mystical interference pattern affecting our talent and it’s definitely not that the muse has taken a holiday. You don’t have writers’ block, you’re just crap today.

Maybe you were crap yesterday too, and maybe you’ll be crap tomorrow. If it goes on long enough, possibly you should look into accountancy. But you’re just having a crappy day like everybody else in every job gets.

I really don’t think we help our case by conjuring up this notion of writers’ block. I think we damage ourselves with other people because we’re sounding like we’re special little snowflakes. But I also think we do some serious, some really serious, damage to ourselves.

If you are a writer and you believe you have writers’ block today, there are only two things that can happen and neither is good. The easier one is that you might just not write now, you might postpone it to tomorrow –– and tomorrow you’re going to have writers’ block too. This is how books don’t get written, this is how scripts don’t get finished.

And even so, I call that the easier one because it can only happen when you’ve got the time. If you’re on a deadline, you don’t have any option but to press on. I prefer that, I think it’s by far the better option, but it’s not easy.

The trouble with deadlines is that they are imposed on you, you are responding to someone else’s deadline. And when it’s the opposite, when you have the time to just not write today, you are the one who is sole control of your deadlines. Writers have a crippling tendency to not write when we don’t have to, and dressing it up with phrases like writers’ block does not help us.

All that helps writers is writing. Getting on with it.