Ten years ago, I was in a Broadcasting House studio with Steven Moffat, the cast of his comedy Joking Apart and also DVD producer Craig Robins. Craig is remarkable: he became a DVD producer, he formed a company and he bought the rights to this sitcom all out of his own pocket and all because he so loves the show. 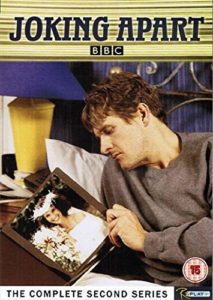 And me. At this distance I’ve not a clue why I was there: I wrote a booklet for the second season DVD and I think I must surely have been there to interview people for it. But all I remember is being a spare pair of hands: it was I who brought people up from BH reception to the studio, for instance.

I should also say that I remember having a very good time: the commentaries are funny and informative. But of course as with any recording of anything, there is a lot of hanging about. Not just for me doing nothing much, but for the commenters.

Which is why I’m telling you this now.

I can remember word for word a thing Steven Moffat said in that studio. I can’t quote him for you because while there isn’t a single syllable that I imagine he’d have a problem with, he didn’t say it to me. I wasn’t even in the room: he was in the studio and at that moment I was in the gallery so I just caught it over an open mic.

Plus, my head must surely have been focused on interviewing about Joking Apart because this was a Doctor Who comment of no use to me.

Except it’s a Doctor Who comment that has really stuck with me and which definitely did so because of what happened slightly later. Ten years ago to the month – 9 June 2007 – the Doctor Who episode Blink aired. It’s a one-hour drama that jumps out of the screen and through sheer force of vitality and energy grabs you by the neck. There’s a repeated line in the episode about how you shouldn’t blink, “don’t even blink, blink and you’re dead” and there is not one single pixel of a chance that you ever could because it’s such a compelling tale. 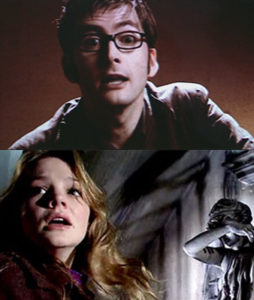 If you know the series, you know this episode and there’s a decent chance you think it’s at or near the best thing Doctor Who ever did. If you don’t know the series then no, sorry, you do: this is the story that introduced the Weeping Angels.

They are genuinely frightening monsters in a series that seems to have to have a new alien baddie every week. Perhaps that constant introduction of new monsters is why I’m usually disinterested in them, including when I write Doctor Who radio dramas for BBC/Big Finish. But I think I’m just automatically more interested in people than, say, tentacles.

Yet Blink is equally exquisite with its characters. Carey Mulligan stars as Sally Sparrow and she really stars in every sense: for once the guest actor outshines the Doctor. That’s no criticism of the then-Doctor, David Tennant, but rather to how he isn’t in the episode much.

I don’t know if this is still the case, but ten years ago each season of Doctor Who had to have one episode in which the Doctor doesn’t appear very much at all. It’s specifically so that the actor can be off filming a different Doctor Who episode. As I understand it, this was the sole way to get each season’s 13 episodes made in time.

Fine, only from a writing and acting perspective, this puts an enormous load on whoever is doing the Doctor-less or Doctor-lite episode. And that’s what Moffat mentioned in the studio.

He’d delivered the script to Blink and I don’t believe the episode had been filmed yet or at the very least he hadn’t seen it. So there we are, some short while before the episode airs, and I’m hearing Moffat talking about how he’d tried his best with it. The sense was that he thought it would be okay, that the show would make it well, but that it wasn’t going to be great.

That’s why the comment has stuck with me. Here’s one of the most successful and doubtlessly one of the busiest writers in British television. Here’s someone who I think has found compelling depths to the Doctor and whose writing can be magical. I don’t know how many episodes he’s written of Doctor Who, I couldn’t begin to add up those plus Joking Apart, Coupling and the rest. But by any measure, Blink is one of his finest moments.

I saw an interview recently in which he expressed mild bafflement at the praise this episode gets and I don’t know if he was being modest. Equally, when he told the Joking Apart studio that this forthcoming Blink episode wasn’t brilliant, he could’ve been just saying it.

I believed him at the time, though, and I still do. I’m just not sure why I find that lifting. I think this was a writer doing something great and not fully realising it so if someone that good writing something this delicious can’t see that, well, it’s confirmed that all writers are screaming crazy eejits and we’re in good company.

Long ago when I worked at BBC Radio WM in Pebble Mill, the sports department had a shelf of highlights on. Large spools of reel to reel tape with the recordings of famous local sporting events.

Only, I can picture that shelf now and I can remember being in that newsroom, looking at the reels and thinking well, er, no. These are not recordings of sports events.

They were recordings of radio presenters commentating on these events instead.

I’m not knocking the commentators, I’m in no way knocking the reasons for keeping the archive. It’s just that although it’s a slight difference, the tapes were regarded as the events themselves, not as the radio station’s commentary.

There’s something in that disconnection that I’ve been reminded of by all the writing about Donald Trump and Brexit. I keep hearing the phrase “you couldn’t make it up” and actually, yeah, you could. I think by now your audience would be a bit bored. They’d want some new characters, they’d be thinking we’ve got antagonists up our armpits, we need someone to be the hero. Anyone. Please.

I think the thing is that you wouldn’t make it up this badly. No matter whether you were commentating on events or especially if you are the poor sod who’s going to make a TV drama about all this one day, your very medium imposes certain things.

Commentators expect to be able to draw on previous statistics. TV drama writers inescapably want light and shade, they want pacing, they want to build to a conclusion.

None of that is available to us. It’s all dark, it’s all unrelenting and statistics are now alternative facts.

We have the most visibly, publicly, proudly illiterate people in power that we may ever have had. Yet they are defying writers to comprehend them, they are controlling the disarray we’re in.

Maybe it will ultimately be good. Maybe this will shake us out of habits and patterns that we are used to, maybe it will make us – okay, me – writer better and deeper.

I don’t know about me and what I can do. But I do see journalism trying to fight back and I do see the writers of Saturday Night Live being on their best form in two decades because of it.

Maybe what I’ve been doing is trying to use writing to help me understand. Maybe I’ve been focused on the commentator’s tapes and really what I should do is go to the event.