Six years ago today, my first Doctor Who was released: Doing Time, starring Peter Davison and Sarah Sutton. It’s in an anthology called The Demons of Red Lodge and Other Stories and you can still get it on CD. I’ve done a few more since then and enough so that there cannot be a smaller cog in the Big Finish Doctor Who world yet there’s not much that is bigger to me. The fact that I was a Doctor Who fan growing up and specifically at the time Peter and Sarah were on the show is of course huge but also it’s radio drama. 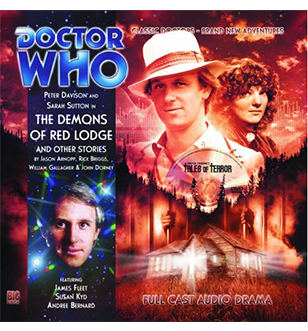 It was 2010, which does seem an awful lot longer ago than six years, and by then I’d have been at Radio Times for a more than a decade, I’d been a radio drama fan for nearer two. Being a drama fan, being a writer, I had very strong opinions on what I liked, what I felt worked. For good or bad, being the audience is different to being the writer, though, and especially as I would write many Radio Times reviews I worried. I didn’t know whether one thing was genuinely better than another or whether it was solely that one happened to appeal to me more than the other.

I still don’t know. What I did for RT, though, was work the internal-logic trick: does the play do what it says it’s set out to do? Whether I liked it or not, did it seem to achieve its aims? I could tell you a poorly produced one, I could spot a naff performance, I learned which radio drama clichés made me wince and which didn’t. And of course a review was obligated to include whether I liked it or not: that had to be in there, it just couldn’t be the only thing in there.

Six years ago today, I heard my first Doctor Who and it was my first radio drama. I think of it as mine and script editor Alan Barnes’s and director Ken Bentley’s and producer David Richardson and of course also the cast’s, but it’s mine. There on the internet and there on CD was the cast of Doctor Who saying the words I’d told them to. Angela and I listened to it around midnight, I think, with the lights off and me quietly shaking.

Five years later, the same piece became my first broadcast BBC Radio drama as it was aired on BBC Radio 4 Extra. I listened to it over our Sky TV, friends told me they caught it in the car. Radio Times ran a proper billing for it including my name. One friend told me she’d heard it while soaking in a bubble bath. My words filling her sudsy, steamed-up bathroom just as they had filled my darkened living room and just as they were filling cars and my early-evening TV set, all at the same time.

I’ve thought before that it’s only Doctor Who that could give me the timey-wimey sense of it being my first BBC broadcast drama five years after the same piece was my first download audio one, but five years then and six years now give me a lot of distance. Enough that I can review it the same way I would’ve done for Radio Times.

And it sets out to do what it says.

Writing is a peculiar gig where even if you’re projecting complete confidence, you ain’t got it at all. But I’ve done a lot since Doing Time and while I can point to many influences, many people, that show is responsible for me feeling that I can write the kind of drama that I like.