If you haven’t done this, you would do it: yesterday I stood at a bus stop, leaning against the printed timetable and using an app on my iPhone to find out when the next bus was due. Anyone who doesn’t have a smart phone might mock me, but you know it’s the truth, you know that you are so dependent on the information you can get on your mobile that this wasn’t silly of me, it was a profound statement about the world we now live in.

But the NextBuses app on my phone was wrong. It was the kind of wrong you only come to realise after you’ve been waiting ten minutes for the bus it said was due in seconds. Ten minutes of increasing cold, rain and the sense of having been conned. Never fear, though, there was that other timetable… app. There’s a fairly new one for my region called NetNav which is ace at planning bus routes for you and ridiculously good at listing the departure times of every bus within a mile of you. And sure enough, the times it gave me were only in the most generous sense even similar to the ones NextBuses listed.

After about five more minutes, I started to get suspicious.

So, trying to look nonchalant, I turned around and read the printed timetable on the bus shelter. I’m not certain why it’s called a shelter when that is one of the many things it doesn’t do, but as a housing for a timetable, it could do no wrong. And sure enough, the times it gave me weren’t even similar to NextBuses or NetNav.

You’re starting to think I was at a stop that had been abandoned, aren’t you? A stop that had stopped. (There are two bus stops near where Angela works that have never had any buses, not one. It’s as if they were put there in the hope that if you build bus shelters, buses will come. It’s a sound theory with plenty of precedent and if it had worked for them, by now I might’ve started building a shelter myself.)

The bus came in its own sweet time.

And when I’d got on, it waited at the stop for the correct time to depart. Which appeared to be as wrong as all the others but had the benefit of being when the bus actually departed.

I don’t expect you to happen to know the methodology of the West Midlands bus transport system, but I would like you to tell me why I carry on using these apps on my phone. This is far from the first time that everything has disagreed and everything has been wrong. In my office, I’ve also used the online bus planner and got times from it that were only accurate to the nearest day. But I keep using all of this.

I have become so dependent on my phone that I keep using this stuff and I keep forgetting the equivalents of the printed timetable behind me. I know I’m not alone in this. And you’re smart but I can see it in your eyes, you do this kind of thing too.

Do you also swear when it goes wrong? No, me neither.

I’ve told you before that I don’t tend to swear. No reason, I just don’t tend to. But there was a time when I didn’t at all. Again, no especial reason not to, just no especial to. But I learned. I learned to swear during the three evenings it took to fit a hard drive into my PC. This was a long time ago, back when there were PCs, and it wasn’t difficult, it was just stunningly tedious: I can’t remember all the steps now but it even included twiddling with the jumpers on the computer’s motherboard. If you don’t know what a motherboard jumper is, you’re looking at the wrong guy for the answers.

I promise you that I knew then and that I got it right then. First time.

It didn’t work. There were just enough permutations and I still had just enough interest in computing that I was willing to keep going and then there was just enough boiling rage that I wasn’t going to be beaten by this sodding thing. On the third night, I took everything apart, breathed deeply, and started again from the very start. I did each step perfectly and I did each step exactly the way I had done it the first time.

I had a huge new hard disk and I had learnt the language that makes mothers blush.

I can’t remember what huge meant then, I know it was not a fraction of what you’d call huge now, and I also can’t remember having either that patience or the time to be that patient in. Strangely, as well as the swearing, I also learned this day that computers are alchemy and that knowledge has helped me through turbulent times when, lo, one’s faith in the cheapest equipment slapped together without being tested, was tested.

I trusted that the computer must be right and that I must be doing something wrong with fitting this thing. Trusted is too active a word, I just knew it was right and I was wrong. And you would think that having this dented would stop me believing the machines whether they are cheap PCs or, to be honest, gorgeous phones.

But no. I obviously still assume my phone knows more than me but I promise that’s less my bowing to the great electronic gods and more that I’ve twigged how everybody knows more than me. Yet the Hard Disc Debacle isn’t what showed me the truth, the closest I’ve come to Damascus was with what used to be called a Turbo Button.

If you know about turbo buttons, you’ve forgotten them. They used to make your PC run slower. You read that right: turbo means slower. When PCs came out, they ran at some certain processor speed, God and many people know what speed but nobody cares. Then when PCs reached their tricky second album stage, they were faster and, gasp, it was so fast! It was so fast that people thought software might not be able to run properly at this heady speed. Again, I can’t remember the numbers but think of the way people believed you wouldn’t be able to breathe in a car that went faster than walking pace. 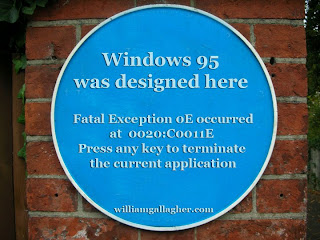 No software had any problem whatsoever. But in that very Microsofty kind of way, PC manufacturers added a feature that you didn’t need. It was a button to slow the PC down. You’re wrong to think that calling a slowing-down button Turbo is the reverse of all sense. You’re just not thinking computing. Remember the Start button in Windows 95 and how that’s where you go to switch the thing off. Remember Microsoft Word which doesn’t have a New or Open Document button at all.

Turbo buttons always had LCD displays above them that said what the speed was. It was always a two-digit display and it only ever showed one speed or the other. If your software was collapsing at the wicked fast high speed, you press the button and all is well again.

I was okay with turbo buttons and even then I wasn’t all that fussed when reviews – I worked on a computer magazine – would mention it as a feature.

Except, one day, myself and a colleague did a feature together where we learnt how to build PCs. ‘Build’ is a joke. Assemble. It was like those How Do They Do It shows on digital TV where they promise to explain exactly how a car works and begin by saying “And when the engine has been placed in the chassis…” before going on to detail the method of paint spraying used.

Building a PC meant doing what a million PC firms did: take this motherboard, which is effectively the entire computer already built for you, and add in a few other components such as a hard disc. I promise I didn’t swear. But I came close with the only fiddly bit in the whole thing: the turbo button. It had a button, obviously, but that was already built into the casing. It had some fiddly wires, that was the thing. Wires that ran from the button directly to the LED display above it. Directly and solely.

I can’t speak for all PCs, but in this one, the turbo button only controlled the display that said it was a turbo button. Someone had designed, engineered and manufactured a button whose sole purpose was to tell you that you had pressed it. In my mind, that was suddenly just like the way that Microsoft Word is fantastic, truly fantastic at recovering documents that have gone wrong and how I deeply wish they’d just put a fraction of that talent and effort into not losing the bloody documents in the first place.

That button may have been the day that I lost interest in what had to then been my career. It was possibly the day that I got more interested in the mind of someone who’d put that effort into lying with electronics than I ever really was in electronics.

It was probably the day that I realised I was relieved to go back to my desk and write on the review Mac I was using.

But it was definitely not the day that I learned to distrust computers and stop relying on them because that day has yet to come. It wasn’t yesterday with the cascade of instant but wrong information.

And it wasn’t today when my 5am alarm went off yet didn’t sound.

This morning I was just thinking that surely it was 5am when I turned to the phone and saw the alarm button was on – the one that says Snooze or Cancel – and that it was 5:31am. The alarm had been on for over half an hour but it hadn’t made a whisper.

I made more than a whisper, I can tell you. And as I continue to prevaricate about emptying that pot, I’m whispering quite a bit.

4 thoughts on “Three departure times and the truth”