Actually, I don’t. I just don’t tend to swear. No reason. I’m not prudish. I don’t object if you cuss your head off – oh! I suddenly, right this moment, remember an old friend stopping in a conversation to apologise to me for her swearing. And I remember most clearly that I hadn’t a clue what she meant.

I’m not saying that I never swear. I have absolutely no doubt that if you searched every blog entry I’ve written here in the last few years, you would find the word ‘fuck’. There it is. Right there. Look at me: I’m so nice I even saved you the search.

Maybe that’s it, maybe I’m just so nice, maybe that’s the whole thing. Though there is a fella who I bellowed at over the phone this week who would disagree. And a woman who called last night claiming that Microsoft had asked her to phone me about a severe problem with my Windows PC which I could fix by browsing to her malware-infested website, she heard the word ‘bollocks’ quite quickly.

And it stinks for when you’re trying to write realistic characters in drama.

I actually think this is the root of it all: I grew up in a polite family, yes, but I also grew up in front of the telly. Lou Grant never swore. Nor did Bob Hope. Actually, I blame Bob Hope films for how my accent became – well, it’s not mid-Atlantic, but it’s never been spot-on Brummie either.

(A quick aside? I just wrote a feature on the ten films that most shaped me and Angela guessed that the Road movies would be in there. They weren’t, but they could so easily have been and all because of the  line in The Road to Morocco which goes “Like Webster’s International Dictionary, we’re Morocco-bound”.)

The Road to Morocco was 1942. Seventy years ago. We are living in an age when something made seven decades ago can be seen an enjoyed pretty much exactly as it was when new. Yes, we now see it on iPads and it has become a snapshot of a culture and a time that it once just fitted into and reflected.

Howay. I am plainly destined to never write searing social justice horror movies that are as profane as they are profound. I’m okay with that.

But it makes me conscious that there are really three types of dialogue, not two. I used to think there was good and bad. Or call it believable and unbelievable. Realistic and not realistic.

I hope that if I write a line it is realistic, that an actor can say it, that it just works. It probably won’t have swearing. Again, not from some deliberate avoidance, it just probably won’t. But that does mean it’s unrealistic.

So I’m writing dialogue that may be good and believable, but it isn’t real.

Not to compare myself to these incredible writers, but this is a key part of the work of Alan Bennett, Harold Pinter, Alan Plater, Tom Stoppard – and Aaron Sorkin. 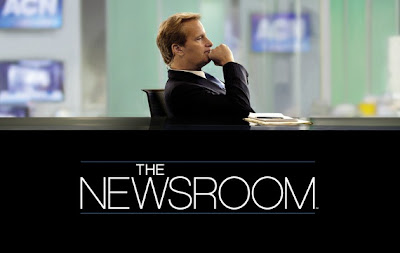 Aaron Sorkin’s The Newsroom has been praised for the verve and brilliance of its dialogue – and it’s been slammed for its unbelievable dialogue. What I think both sides are missing is that it isn’t real, it is extremely stylised writing and at its best, it’s wonderful. Gigantic conversations happen in three lines, two of which have nothing to do with the subject at heart. People speak with passion and energy and it is uplifting.

I don’t care that it isn’t real, that none of us will ever meet a Will McAvoy (Jeff Daniels) character in real life.

I do mind very much that we have already met a Will McAvoy character in most of Aaron Sorkin’s work before.

It ticked me off in Studio 60 when Matt (Matthew Perry) accidentally broke an office window because I’d seen Will Bailey (Joshua Malina) do it in The West Wing and Malina was in Sports Night when Dana (Felicity Huffman) did it there. Similarly, The Newsroom has McAvoy comically unable to remember a character’s name; just as Jed Bartlett had problems with it, just as Sam Donovan did before him.

Things stop illuminating a character when they first have to shine a light through two or three other characters before them. Every writer reuses ideas or maybe even lines as they explore the same themes – though me, not so much – and sometimes it’s a running gag for the audience to spot. (Watch an Alan Plater piece and you’ll likely as not hear someone ponder whether they can make it to the Mexican border by nightfall.)

I think things don’t have to be realistic in order to be realistic. Switching the light off with those preceding characters and looking just at The Newsroom’s McAvoy, he talks in a way that perhaps you’d want to but none of us do. When it works, it’s wonderful. But the price of it all is that sometimes it doesn’t work.

If memory serves, there wasn’t a moment in Sports Night when the dialogue didn’t work. Definitely not in The West Wing. I remember Studio 60 having comedy sketches that weren’t funny but otherwise, the characters all worked. But in The Newsroom, it does sometimes fail.

Martin Sheen has said many times that it took him a while to get Aaron Sorkin’s lines and to deliver them right. Sam Waterson doesn’t seem to have got there. Emily Mortimer often doesn’t land the lines. These are terrific actors but they didn’t pull this off. To just underline the difficulty, there was a minor character in the Newsroom pilot who tortured a line about people having a personal argument in front of him.

The Newsroom is delicate. It’s making a similar mistake to Studio 60 in setting up rivalries but instantly pricking them apart. (In Studio 60, the big threat was from the network boss who could fire Amanda Peet’s character but not only was she a star, his was a very binary threat. There are no degrees of firing: his only weapon was total removal of her from the show. It was never going to happen and we knew it immediately. Within a few episodes, he was changed to being a good guy with some nasty boss above him. Exactly the same problem, just a step removed. A few episodes later, the threat was pushed off another step to being the big bad nasty FCC. If the FCC is your series enemy, your goodies are weak too. In The Newsroom, the first news story was about the BP oil rig incident so we knew instantaneously that our heroes were right to be pursuing this story and their rivals were wrong – even stupid – not to. Instantaneously. The rivals have nothing so they aren’t rivals.)

Aaron Sorkin says that during The West Wing, he wouldn’t touch a subject unless they could make very good, very strong and conflicting arguments on both sides of a topic. That’s stunningly hard to write but I believe there may never be any better drama than two people arguing where both of them are right. Swear or don’t swear, I don’t care, but when both sides of a contentious issue are articulate, passionate and right, who gives a damn whether they swear?