Go back. Go back to where you once belonged. It’s fantastic.

I’m heading to the Writers’ Toolkit event and have found myself walking by a place I worked at twenty years ago. It was Apricot Computers on Vincent Drive – I wrote manuals for them – and it’s now something to do with Birmingham University. The odds that any of this could mean anything to you are zero. 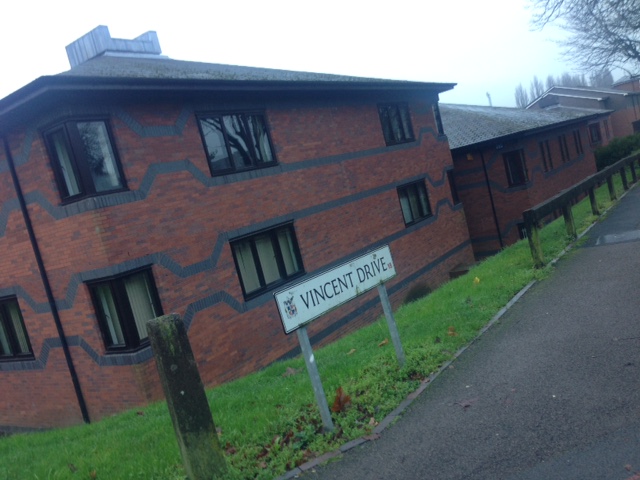 But it means a lot to me. I look at this building and even at that road sign and the first rushing feeling I get is that I knew nothing when I was there. Which must mean I know something now. That’s rather a good feeling. I’m not used to that.

Part of it is the surprise of coming across this place so unexpectedly. That’s definitely a big part of it.

You can’t really manufacture surprise, though. Not about a building. But I also get and clearly recognise that I get a similar thing every time I work at the Library of Birmingham.

It’s new and most of this is the coincidence of it being recently opened. I loved the old Central Library but I associate it with all the research work I did there for Radio Times.

Central Library was where I worked for someone else. And now I work so much and so often at the Library of Birmingham yet every time it is for me. It’s for my business.

I’ve been freelance since the 1990s so I shouldn’t just be feeling this now. But I am. And it’s because of the places I go and the times I went there before.

And the times I had there too.

It’s a video with jaunty editing, a kind of indie-pop-folk-happy soundtrack and lots of folk looking very happy with their computers. The only thing that stops this being an actual ad is that they ain’t paying me and I’m not trying to sell you anything.

Take a look at it, though, would you? This is aimed at small business owners and its a promo for FileMaker Pro, a database service. I used to run my Radio Times On This Day research through FileMaker Pro, I wrote The Beiderbecke Affair book using it, I like FileMaker Pro a lot.

And you can find more details about FileMaker on its official site.

The rule is that Android users get free apps, iPhone users pay for them. I am an iPhone user and I am more than fine with paying for apps. The amount of use I get from them, the pitifully cheap prices, it’s not a debate. But I do get free iPhone apps and specifically I do often grab paid ones that are briefly on offer as freebies. I’ll do that in part because all those 69p purchases add up and I’ll do it mostly because I’m often poking around an area, looking for a type of app rather than a specific one. And then I also do it because there is a specific advantage:

Free is cheaper than paid.

Okay, there are two specific advantages:

Once you have an app, you have it forever

Once you have an app, you typically get free upgrades

So if an app that I definitely want then I’ll just buy it. But if there’s one I fancy trying or that I think I will need at some point, I’ll grab it when it goes free – and I may even delete it immediately. Without opening it even once. Because I’ll open it when I need it and all I have to do now is download the thing. Actually, you don’t even have to do that: starting to download it is enough, as I found when I went through the Channel Tunnel part way.

Once you have officially bought the app, you can delete it and know that you are able to get it again whenever you want. For free. Even after the price goes back up, most of the time also after the app has been upgraded later. Some apps make their new versions completely new apps that you have to pay for again and there are apps that do vanish forever. You’re out of luck with those but otherwise, this all works. So, for instance, Lonely Planet made a lot of its travel guide apps free last year and I grabbed the lot, deleted the lot – and then brought back ones when I was actually going travelling.

Quick story? I once advised on an app that was so bad I gave the maker a list of 19 reasons it could not be released. They ignored me, submitted it to Apple, and Apple rejected it with 20 reasons. I still kick myself over the one I missed. But the maker sort-of addressed those 20, enough to get it on sale anyway, and I was required to have it on my iPhone. But it was so bad, I mean it was still so embarrassingly bad that I deleted it. Whenever I’d be in a meeting when I was asked a question about it, I’d just re-download it from the App Store, slog through trying to work out the answer, then delete it again. One day I was asked a question by one editor in the company and couldn’t get it back: another editor had approved it being removed from the App Store forever. I don’t know who that was, but he or she made me look bad in that meeting. And I applaud him or her for doing it. That’s how bad the app was.

But you want to know how to find when apps go free. Try an app way: download the Apps Gone Free