Short version: the calendar app Fantastical dropped its price as a launch offer to promote the new features it has for iOS 8. Thick William here just saw the price drop and reported that.

In my defence, the first word I had of it was an alert about the price drop and that didn’t mention new features. I even went into iOS 8’s Notification Centre to see if Fantastical had added anything and it hadn’t. But later that same day, an update to Fantastical 2 appeared and it has Notification Centre stuff, it has sharing stuff, it has all sorts of goodies. So on the one hand I will let myself off for missing what wasn’t there at the time, but on the other I’d now like to hand you over to someone who didn’t miss a trick:

Fantastical 2.2, available today on the App Store, brings iOS 8 features that allow the app to be more easily integrated with iOS workflows thanks to a share extension and that extend the app beyond its silo with actionable notifications and a widget.

Before iOS 8, I never turned on Fantastical’s notifications because they couldn’t have the same level of integration found in Apple’s native Calendar and Reminders apps. I enjoyed the ability to mark reminders as complete or snooze them from Apple’s notifications, and I didn’t want to miss that kind of shortcut with Fantastical notifications.

iOS 8 allows Fantastical to send interactive notifications that are (mostly) on par with Apple’s. In my tests, I turned off Apple’s notifications and activated Fantastical’s for events and reminders. For events, Fantastical can show banners that, once swiped down, reveal a Snooze button to postpone an event. Tap the button, and Fantastical will open showing the selected event with a popover for snooze shortcuts and manual controls.

Read the full piece. And then go get Fantastical 2 for iPad and for iPhone.

I still use Apple’s Mail, iTunes, Maps, Camera, pretty much everything: I’m not much of one for ditching the provided apps in favour of replacements by other companies. I get it and I do try them out, but those Apple apps I keep are good and usually I don’t find alternatives to be compelling. 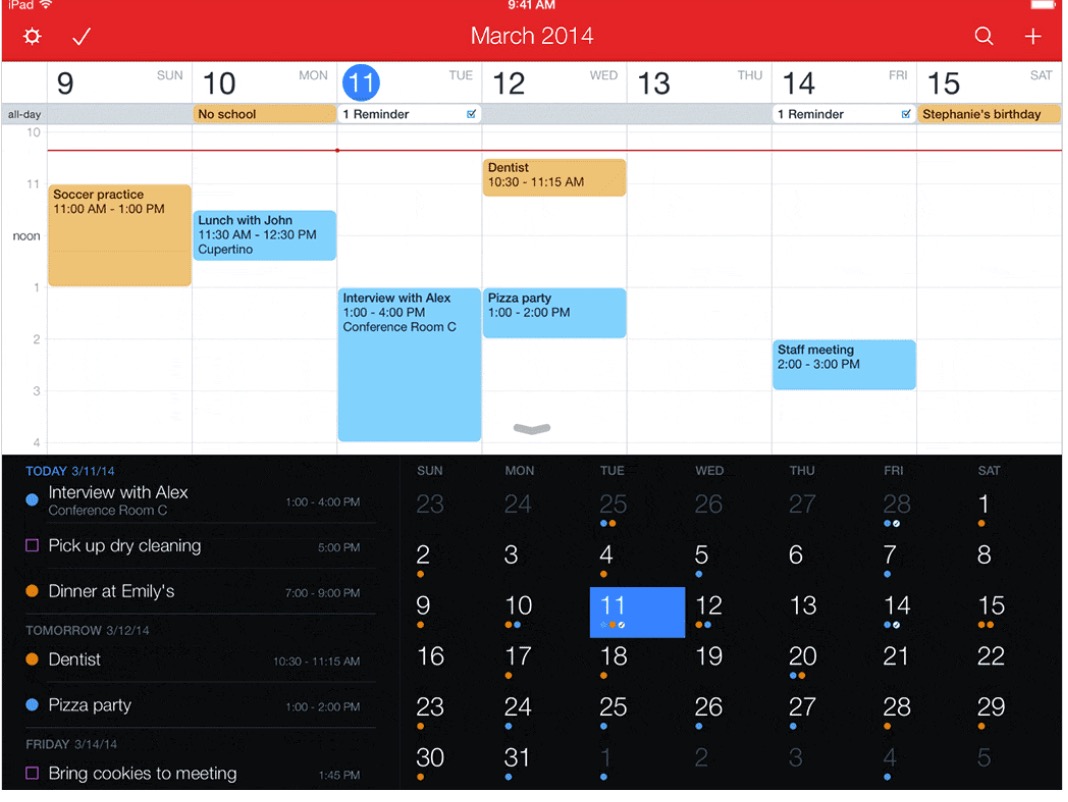 That has replaced Apple’s Calendar on my iPhone and iPad. It’s the way I can type “Lunch at York’s Bakery with Bert next Tuesday from 12 to 3 /a”. (The /a at the end adds the appointment to my joint calendar with Angela. It just needs that first letter to know which calendar I want.) And it’s also now, right now, this moment, talking to you, that I like it for how it detected that lunch example. I wanted to be sure I wasn’t steering you wrong, that this slightly more complex than average line would still work. So I copied it, went to Fantastical 2 for iPad and was going to paste it in but didn’t have to: Fantastical popped up a little note saying that it had detected an event in my clipboard, did I want to add that?

So I did and it worked perfectly. That’s impressive and I thank you for it, I hadn’t seen that before.

I’m glad of it because I like there being specific things I can point to that are good. For me, the reason to stay with Fantastical 2 is more a general, nebulous, comfortable one. I like the design, mostly, and when I go back to Apple’s one I’m missing the look and the feel of Fantastical.

I like it enough that having used it on iPad, I bought a copy for iPhone. I don’t like it so much that I’ve also bought it for my Mac, but I keep thinking about it.

Along the way of thinking about the iPhone version and whether to buy it, I did find that during my trying out of alternative apps, I had at some point bought and discarded Fantastical 1 for iPhone. I tried using it again and I couldn’t see why I’d chucked it away before. I think in the end the reason I spring for a new app with Fantastical 2 is that I liked it so much on the iPad that I wanted to reward the makers a little. A very little: Fantastical 2 is cheap.

And because I don’t think I’ve conveyed the benefits of Fantastical 2 very well, here’s a video from the makers, Flexibits: