I’m spending today running a workshop for the Federation of Entertainment Unions: that means I’ll have people from the Writers’ Guild, the Musician’s Guild, NUJ and Equity. It’s a day-long workshop version of The Blank Screen and I’ve done it many times but it is always different.

I don’t mean because every person is their own special little snowflake and the day runs in different directions, though it does so I suppose they are. I mean it’s different because I change it.

Sometimes I’m just changing the presentation and the workshop plan because something new has come up and I might do that any time between these days. But there is also one thing that I don’t write and don’t change until the morning, until just before I leave.

It’s just this. I spend a lot of time in the workshop talking about To Do lists and how to make them something you use and that you enjoy using rather than something dreaded that you avoid. And I feel obligated to include my real To Do list. So I do, I add in a slide that (today) has this: 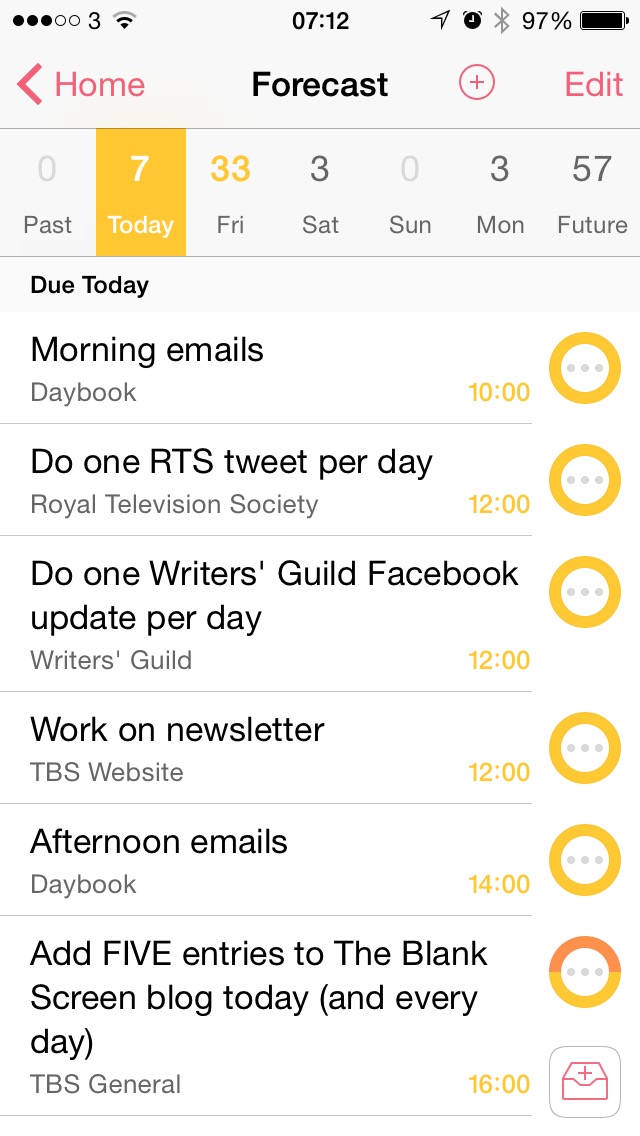 What I like very much is the simple thing that is doubtlessly complex yet I don’t have to care, I can just relish it. This. I added that To Do list image and I made various twiddles to the presentation on the 27in iMac in my office. I present from a MacBook Pro. And as I turned from the iMac to set up that MacBook Pro, my new presentation was already there. It was already on the MacBook and I didn’t do anything. Didn’t AirDrop it across, didn’t use a USB thumb, didn’t email it.

I wrote it on the iMac and it is on my MacBook as if I wrote it there.

And here’s another thing. I’m writing to you in Drafts 4 on my iPad and that image above of my To Do list comes from my iPhone. I didn’t send it over to my iPad, didn’t copy it, didn’t do anything. It’s just there where I need to use it.

As I say, this is doubtlessly complex stuff behind the scenes but to me, it’s just that everything I need is where I need it, when I need it. I think that is heady and gorgeous stuff.

I still use my free Dropbox account, I’ve just managed to nudge it up from 2Gb of space to 9Gb through a lot of work with offers and deals and referrals. It would be great to have more, it would mean that I could keep everything I do available to me everywhere I go. But the leap from free to paid has been rather big.

Now, not so much.

We don’t want you to worry about choosing the right plan or having enough space. So today, we’re simplifying Dropbox Pro to a single plan that stays at $9.99/month, but now comes with 1 TB (1,000 GB) of space.

That’ll be $99/year. For UK users that’s £7.99/month or £79/year. It is a gigantic drop: previously you had to pay $99 for a year – sorry, you’re thinking that this doesn’t sound much or in any way different? But your money got you 100Gb: you’re now paying less for ten times more space.

But of course what Dropbox doesn’t say is that this is all because of competition from Google and Microsoft.

I don’t fancy Google Drive nor am I interested in Microsoft OneDrive because I’m already committed to Dropbox and like it a lot. I especially don’t want to get into a situation where some of my work is in Dropbox and some of it is in a rival system. That’d just do my head in.

So the fact that the price has dropped this much and the space has gone up this much is very tempting to me.

And yet I’m holding off.

I’m almost embarrassed to tell you why yet you need to know because you should hold off too.

It’s this. In a week or so, Apple will formally announce OS X Yosemite and iOS 8 – and these include iCloud Drive. Both Yosemite and iOS 8 will be free but iCloud Drive will be a Dropbox-like service. So yes, I am waiting to see whether I actually will split my work between Dropbox and another similar service. That’s why it’s embarrassing.

If iCloud Drive is very expensive I won’t do it, but it has the advantage – and this is why I’m even considering it – that it’s iCloud and so works really well with Macs and iOS.

Enough so that it is worth waiting to see what the price is. But after that, Dropbox is on my list.

From next month, users of Microsoft’s Dropbox-like OneDrive will get 15Gb free instead of the current 7Gb. If you’re an Office 365 subscriber, that goes up to an is-this-a-misprint size of 1Tb.

Our data tells us that 3 out of 4 people have less than 15 GB of files stored on their PC. Factoring in what they may also have stored on other devices, we believe providing 15 GB for free right out of the gate – with no hoops to jump through – will make it much easier for people to have their documents, videos, and photos available in one place.

Seriously? I think the 15Gb free space is tremendous but why claim 75% of all computer users have no more taken up than that? I don’t mean to be rude questioning “our data” but it is unsubstantiated. And this is Microsoft, the company whose user testing of Microsoft Word seemingly failed to include any tester trying to open an existing document or create a new one. Hmm. Everything makes sense now.

So does Microsoft making this generous deal and doing so now. OneDrive is Microsoft’s version of Dropbox and right from the start it has offered more space than that service. But now Apple is shuffling its iCloud service so that instead of only an invisible repository for documents, it’s going to be an actual space you can reach and add files to.

It’s not like I think Microsoft should say “hey, we’ve got this one rival we’re trying to unseat, right, and now there’s bleedin’ Apple coming along AGAIN, we’re going to shove some free space at you”. But the 15Gb is sufficiently generous that I think it could’ve just said that and not tried to claim that it can hold all the documents and images and music of all but 25% of computer users.

I don’t have a Microsoft OneDrive account and I do have a Dropbox one. To be honest, I do relish how useful Dropbox is and it would take work to switch away. You could and probably should have Dropbox and OneDrive, that would make a lot of sense for storing documents in places you could reach wherever you are.

But I have a low faff level. I already think it’s bad enough with iCloud that I have to think first, which application did I write that document in? And how I do sometimes have to stop to ponder, did I do that in Pages and store it in iCloud or did I do it in Evernote? I’m also an OmniOutliner user which comes with the Omni Group’s brilliantly-named OmniPresence.

Somehow without intending to, I’ve become fractured over several cloud services. I will get Apple’s iCloud Drive, as it’s going to be called, because it’ll just be here on my Macs and iOS. Maybe I can fold some things into that.

But isn’t the cloud supposed to make all this stuff transparently easy? If you’re in or you like the Microsoft environment, maybe this new OneDrive offer does.